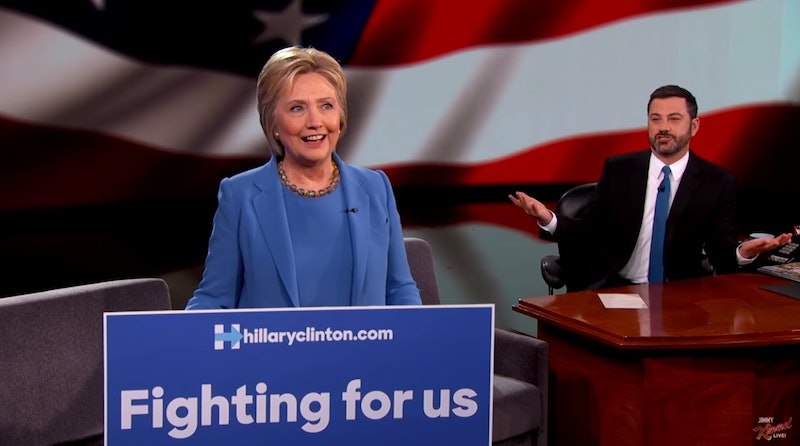 If you're a woman, there's a fair chance you know that feeling when a man condescends to you because of your gender. When someone is holding you to a blatantly sexist double-standard, or assuming they know more about a particular issue than you do, just because the pervading culture usually considers it a man's domain. Sometimes this can happen even when you're in your area of expertise, and you're talking to someone who's utterly clueless. For example: Jimmy Kimmel mansplained to Hillary Clinton about her campaign stump speech on Thursday night.

Not in earnest, obviously. It was the set-up for a very funny, very observant routine about the heavily gendered types of criticism Clinton often absorbs while on the trail. Not necessarily about policy ― although some criticisms of her policies have overtly sexist overtones, too ― but the sorts of questions male politicos rarely have to face. About her clothes, her hair, whether or not she should smile more, whether she's too shrill, whether she's trying to act too tough, whether she's being too emotional, whether she's too old, and on and on.

Probably figuring the best way to demonstrate the sexist absurdity of all this was a real-time demonstration, Kimmel invited Clinton to deliver a few lines from her now-familiar stump speech to his Jimmy Kimmel Live audience on Thursday, saying that he'd helpfully mansplain to her if she did anything wrong. She was game.

At a brisk 3:30, it's definitely worth watching all the way through. As Clinton works her way through the opening lines of a few familiar passages in her speech, Kimmel occasionally interrupts, chiming in with some not-so-subtle suggestions ― to speak softer, to speak louder, to smile, to not look so forced while smiling, and of course, to look like she's having a good time. For example, he tells her,

Oh my God with the sourpuss. Try to have some fun, this is your dream, pretend like you're enjoying yourself!

That last one leads Clinton to give up, saying, "You know, Jimmy, your comments are kind of contradictory. It's like nothing I do is right." Kimmel agrees, saying, "You're not doing it right, I can't put my finger on it, but you're not..." before Clinton puts the punctuation mark on it: "A man?"

The whole thing compresses a familiar, irritating phenomenon into a funny few minutes, and it also shows off Clinton's comedic timing on a subject that, sad to say, she's very familiar with. It'd be nice if actually seeing a woman elected president could somehow help break some of these implicitly sexist habits so many people have, to help get us to a world with a few less assumptions and a lot less condescension. Although, judging from the racist backlash to President Obama's election in 2008 that's still plaguing us today, that might be wishful thinking.