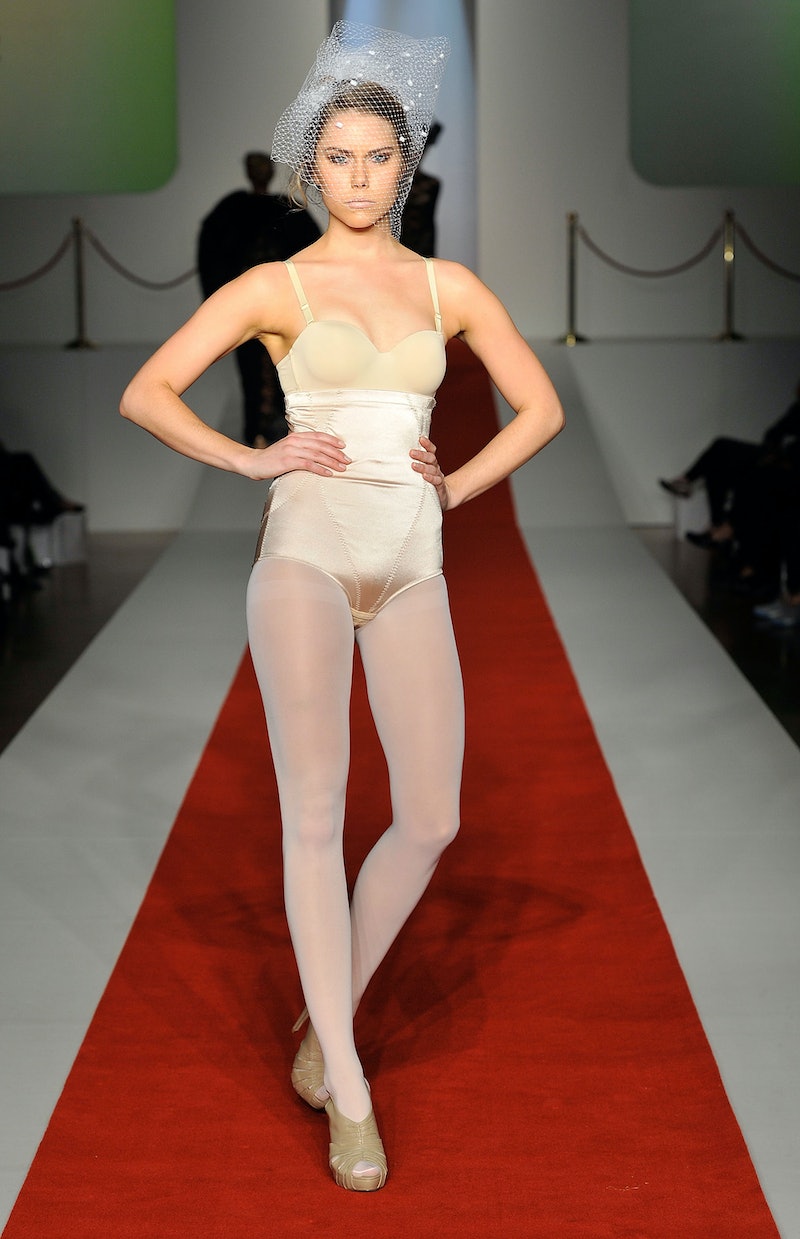 Putting shapewear underneath one's clothes is a reality for many women. Kim Kardashian has even claimed to wear two pairs of Spanx with some outfits. But what does shapewear do to our bodies, in a more scientific way? We often hear about organ crushing, but can wearing a pair of control knickers every day really cause damage, or is it all totally fine?

I have only recently returned to the world of shapewear after a happy few years of embracing my jiggly bits. My new adoration for bodycon skirts and dresses has come at the cost of feeling required to wear shapewear. This might not seem incredibly body positive, but at least I can admit that not everything I do to preserve my mental health comes with a special "self love" sticker just because I'm a body positive proponent doing it.

In my earlier forays into shapewear, control tights two sizes too small used to make me physically throw up by the end of the night. That was the main reason I gave them up. Now that I'm older and wiser in the world of underwear, I know that investing something in my actual size and designed by a good brand makes my shapewear feel not only more comfortable, but healthier.

However, I can't be sure that my shapewear isn't actually causing me harm without doing the research. I wanted to find out what science has to say about the effect of shapewear on our bodies, and this is what I learned.

1. It Can Cause Acid Reflux

Jacqueline M. Wolf, M.D., put together "A Women's Guide To A Healthy Stomach: Taking Control Of Your Digestive Health," where she listed the causes and cures for the stomach issues that women are often too embarrassed to speak about publicly. In her list of things to avoid, Wolf explained not only the dangers of shapewear, but the dangers of tight clothing on our stomachs.

According to Health Central, the acid reflux brought on by shapewear has also been linked to injury in the esophagus or as it's medically known, erosive esophagitis.

Richard Bricknell, director at the Bristol Physiotherapy Clinic in England, told The Daily Mail that wearing shapewear can lead to panic attacks, hyperventilation, and even stress incontinence due to the pressure on your stomach and displacing of your diaphragm.

Or as he put it, "By artificially holding in your stomach, control pants prevent your diaphragm from descending fully while breathing, which can lead to hyperventilation, panic attacks, and stress incontinence."

3. It Can Worsen Irritable Bowel Syndrome

In the same Daily Mail article, Bricknell went on to explain how shapewear can affect those with pre-existing stomach issues, such as acid reflux and irritable bowel syndrome. He warned those who suffer from these conditions against wearing tight clothing in general. "Conditions such as reflux and irritable bowel syndrome can also worsen because of tight pants. Worn day in, day out, there could be very real health risks," he told the publication.

4. As Well As Compress Your Organs

The debate about waist trainers destroying your organs has been in the public eye as of late, but the same can allegedly be said of the shapewear that we've accepted as part of the fashion industry for years. Gastroenterologist Dr. John Kuemmerle spoke to the Huffington Post about the problems shapewear can yield, telling the publication, "[Shapewear] leaves your stomach, intestine, and colon compressed, which [...] can worsen acid reflux and heartburn. Restrictive clothing can also provoke erosive esophagitis."

Although I've already covered how bad erosive esophagitis can be, I think knowing that shapewear is actually compressing our organs deserves its own shout-out.

The Huffington Post also spoke to chiropractor Dr. Karen Erickson about the problems with shapewear, who warned that the effects of shapewear aren't limited to your stomach. In fact, your legs can be badly affected by wearing shapewear because, as Erickson put it, you are essentially "putting these giant rubber bands around your upper thighs and tightening them when you sit."

She added that this can lead to numerous problems with our legs, including but not limited to tingling, numbness, pain, decreased circulation, blood clots, varicose veins, and lymph congestion.

Dr. Erickson doesn't expect you to stop wearing shapewear altogether, but to at least wear shapewear that fits. "You want it to do its job, but you don’t want to get something so small that it’s damaging you." To know that it fits correctly, just make sure that "it’s not cutting in anywhere. All it really does is smooth out the rough edges and you can easily get in and out of it without a struggle." Personally, I'll definitely be more cautious about wearing shapewear too often or sporting pieces that are just too tight.