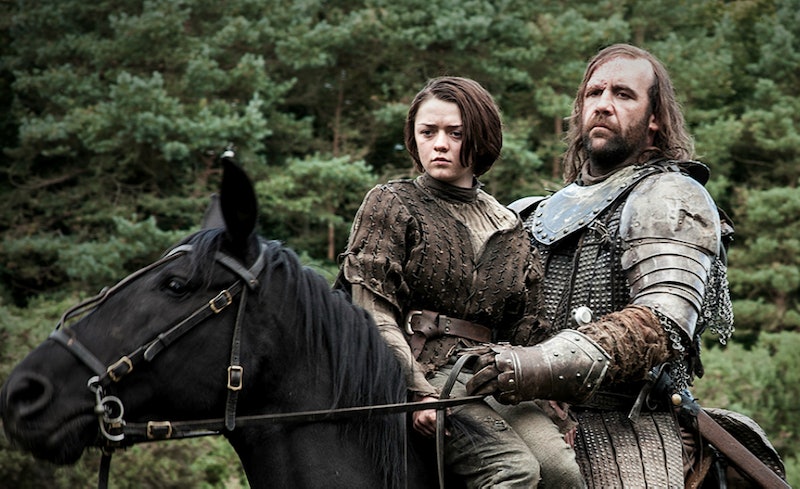 If you read this headline and were thinking, "most toxic relationships in Game of Thrones ? All of the relationships are toxic, and there are so many characters with these sorts of ways of dealing with each other," you would not be wrong. When it comes to warm and fuzzy affections between peoples with mutual respect for each other, these simply doesn't exist in the Seven Kingdoms. Everyone seems to relate to each other in this completely bizarre out-to-get-each-other-way, and the main characters are all a part of these families that are so inter-connected through history. And marriage it just makes it worse. It's like an already dysfunctional family reunion on steroids, or whatever similar drug cocktails the Maesters in Westeros could create.

But there are some relationships in that land of ice and fire that stand out as more messed up than others with just a dash more toxicity. These include romantic relationships, brother and sister joints (which sometimes include romance), kidnapper and kidnappee bonds, advisors, and frenemies left and right. It's not easy to have a normal relationship when everyone is struggling so hard to get on that totally painful looking Iron Throne. Here are the least awful to the ultimately most horrible awful toxic relationships ever. Stay strong guys; it's going to be a bumpy ride.

These guys have a pretty messed up on-and-off-again relationship. I mean it was founded on Jorah spying on the young conqueror for Robert Baratheon. Jorah's proved himself time and time again, but his often blinding love for his Khaleesi causes him to overstep himself. And his need to mansplain things is making this relationship very toxic.

From the moment Asha pretends she doesn't know who her brother is when she picks him from the docks, we know this is relationship is going to end badly. Asha spends her whole time making Theon miserable and acting like he's not worthy of the Greyjoy name. Which may be true, but isn't very nice and certainly helps to lead to his Bolton-themed fate.

Dany makes it on the list pretty early on, but I can't blame her. She finds herself surrounded with men who constantly undermine her. It doesn't help her that her brother Viserys is willing to just sell his only remaining family member off like she's a horse. Oh, and then there's the whole verbal and physical abuse thing to top it off. The only reason Viserys doesn't make it higher on the list is because, luckily, he didn't last very long.

These guys are sort of allies and friends, but both are very aware that one would betray the other in a second. That doesn't help to breed a very healthy relationship.

7. The Hound And Arya

On one hand, Arya really wants to murder The Hound. On the other hand, he kidnaps her so he can safely help her on her way to her family. On the third hand, he killed one of her best friends. On the fourth hand, he saved her from certain death when she stumbled upon the Red Wedding. On the fifth hand, Arya refused to kill him when he begged for it. There are a lot of hands going on that make this a very confusing and very toxic relationship.

Janos Slynt constantly undermines Jon Snow's authority and was very involved in the death of Snow's father, but yet they are forced to be "brothers" of the Night's Watch. I think it's safe to say that, when Jon Snow sentences Slynt to death, their combined Watch had ended.

Lysa murders her husband due to her long-lasting unrequited love for Baelish and then he murders her for her power (or maybe because she's totally crazy). But first he makes sure to have the loudest night of sex with her that Westeros has ever seen. It was seriously messed up.

Sure, they are "in love," which is nice even though it's incest and totally not OK. But is it real love or is it that they are such narcissists that they can't help but love the person who shared the womb with them? The creepy twin thing, and that one time Jaime raped Cersei, makes this "love" an even more toxic one than it was before.

Yikes. Tywin has literally spent Tyrion's entire life blaming him for the death of his wife. That, and all the other trauma, finally leads to Tyrion murdering his father. I think it's safe to say things can't get much worse than that.

Poor Sansa has heart-wrenchingly bad relationships with all of her captors and "friends," but we had to watch Joffrey torture her for years, and it was devastating. I was never so happy to watch someone die on television.

Coming in our number one spot, we have the wannabe king who listened to a woman who convinced him to murder his brother and daughter, all so he could sit on that pointy Iron Throne. He also tried to choke her out once after he lost the battle at King's Landing, which didn't help make this the happiest of relationships.

Though sometimes painful to watch, the toxic relationships in Game of Thrones do lead to some pretty fascinating story lines. Here's to April 24, the premiere of Season 6, when we see what horrors these people instill on each other next. I've already stocked up on tissue boxes for all the sobbing this toxicity will cause.

More like this
18 Hinge Prompt Answers To Try If You’re Looking For Something Casual
By Lexi Inks
A Doctor Weighs In On Prince Harry's Frostbitten Penis
By Chloe Foussianes
This 'Gossip Girl' Wardrobe Error Has Gone Viral On TikTok
By Alyssa Lapid
Mollie Gallagher Has A Deeply Personal Reason For Taking Up Skating
By Maxine Harrison
Get Even More From Bustle — Sign Up For The Newsletter
From hair trends to relationship advice, our daily newsletter has everything you need to sound like a person who’s on TikTok, even if you aren’t.