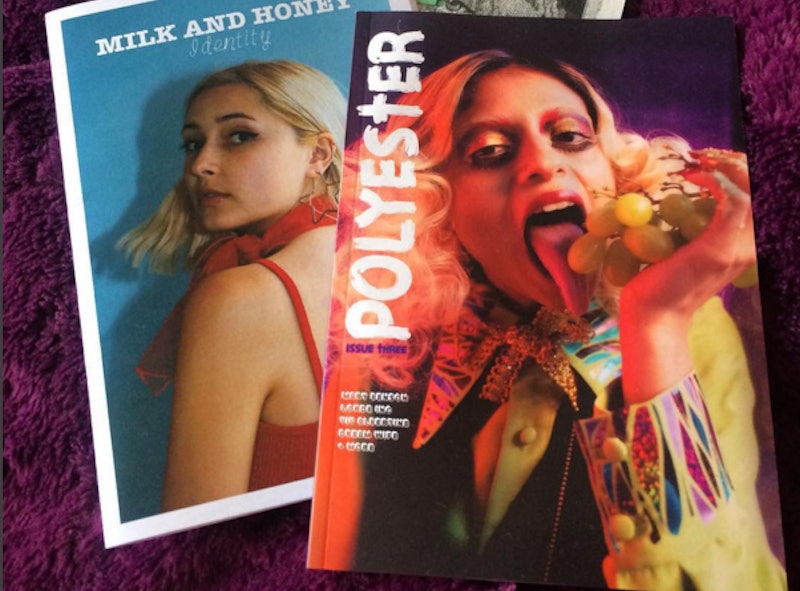 Zine culture has been on the rise through the past couple of years, with many young feminists wanting to reclaim fashion, beauty, music, and art from big name glossies and established corporations. Arguably, the best fashion zines are out to fight the patriarchy and challenge society's definition of beauty through self-publication and the promotion of designers and artists you may have never heard of. Although the Internet is an excellent resource for discovering new scenes and paving the way for alternative fashion (not the Hot Topic kind), supporting zine culture will help keep print alive in the underground.

ICYMI, zines are different to magazines for numerous reasons. "Zine" is short for fanzine, and they are almost exclusively self-published and independently run and funded. Plus, they focus on issues that the mainstream doesn't often touch upon. For many, feminism, queer culture, and social justice are the main focus. Even within the fashion and beauty-specific publications, zines are interspersing style with radical ideas and a refusal to adhere to traditional Euro-centric standards of beauty.

To support these zines, you can share their websites with friends, follow their social media accounts, and purchase the publications themselves. If you've ever refused to buy a Kindle because you love books too much, you should also consider purchasing print zines instead of refreshing your Tumblr feed. Here are seven places to start.

London-based Polyester Zine celebrates all things brash, kitsch, and camp about womanhood and queerness. The magazine is an active fight against minimalism and traditional beauty standards that dominate the fashion industry, and features critical essays regarding living life outside the norm.

One Of My Kind — more commonly known as OOMK — is based in London. It's a highly visual zine that explores identity and activism online, in print, and at creative events OOMK specifically curates. Each issue focuses on a different theme, and although the zine makes an effort to include a diverse array of women, it is "especially keen" on including and representing Muslim women, as noted on its website.

Based in New Jersey and made "by teens, for teens," Crybaby is only a year old, but has already gained a cult following, each issue selling out almost as soon as it's released. This zine is all about growing up, and its contributors have no issue getting into the nitty gritty of adolescence — experimenting with your style included.

Shade was founded by two women in color in 2014 who felt that there was much missing from the world of Internet art. The zine wishes to highlight and celebrate up and coming artists and has also paved the way for more online spaces created for young people of color.

The Coalition's Instagram account recently got hacked, so be sure to show your support by following (or re-following) it. The zine is by and for women of color, focusing not just on creating diversity in publishing, but putting serious heart into doing so.

The first issue of Hate Zine was only released in Sept. 2015 and is unfortunately sold out, but another zine is coming soon. Being totally self-funded means that this London publication can feature and discuss whatever it wishes, making the zine a stark contrast to big name glossies that are often forced to censor or dilute important issues.

Co-founder Luisa Le Voguer Couyet explained to Dazed And Confused what the zine's intent is. "Representing people from different backgrounds; female voices are important; giving young artists and writers a means to publish their work; articles that touch upon the shit that's going on; and not presenting real issues in an ignorant, glossy way," she said.

All these zines combine visuals, fashion, and social justice in a way that mainstream media often seems to struggle executing. Not only will you be able to learn about current issues alongside underground trends, as well as discover new creative talent both in the beauty industry and outside it, but by supporting these independent zines, you'll know that you're money is going to those who can use it to further the causes you care about most.

More like this
42 Black Owned Fashion & Beauty Brands To Support Today & Always
By Mekita Rivas, Shea Simmons, Kui Mwai and Dominique Norman
24 History-Making Black Women You Probably Didn't Learn About In School
By Ayana Lage and JR Thorpe
25 Inspiring Quotes From Black Women To Celebrate Black History Month
By Kyli Rodriguez-Cayro and JR Thorpe
8 Charities To Donate To During Black History Month
By Alexis Morillo
Get Even More From Bustle — Sign Up For The Newsletter
From hair trends to relationship advice, our daily newsletter has everything you need to sound like a person who’s on TikTok, even if you aren’t.