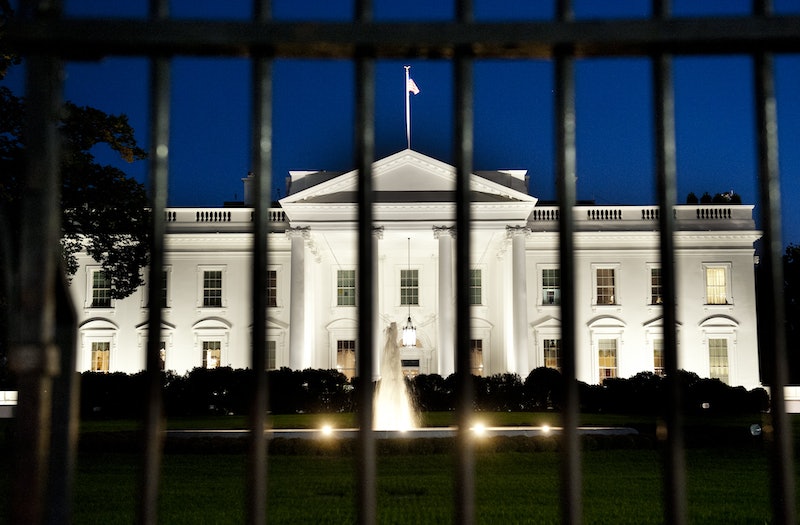 Monday afternoon, police put the White House and Capitol on lockdown after gunshots were heard in the Capitol Visitor Center. One police officer was reportedly shot, though not seriously injured, and the shooter was quickly taken into custody, though the Capitol's Sergeant at Arms asked everyone to remain sheltered in place. Update: CNN reported that a police officer was not shot, and that a female bystander had been injured. A male suspect is in custody. "We believe this is an act of a single person who has frequented the Capitol grounds before, and there is no reason to believe this is anything more than a criminal act," the U.S. Capitol Police chief said.

At 3 p.m., an email was sent to staffers alerting them that the entire U.S. Capitol complex was being put on lockdown because of a "security threat." It said that no one was allowed to enter or exit any buildings, but that people were allowed to move within the buildings and underground between buildings. If someone was outside, it warned to seek cover.

The most well-known shooting at the Capitol occurred in 1998, when two police officers were killed and a tourist was wounded by a gunman who entered the building and headed for the House majority whip's office. The Washington Post reported at the time that the officers were the first Capitol Police officers killed while on duty at the building. According to The New York Times' chief Washington correspondent, Carl Hulse, the Capitol Visitor Center, where Monday's shooting took place, was reportedly built in response to the 1998 shooting in order to make the distance between the entrance and the Capitol building further apart.

The lockdown on the White House, which had been hosting its annual Easter Egg Roll, was soon lifted, though the Capitol complex remained on lockdown before putting put on a partial lockdown, with the complex being open for routine business but the visitor center still remaining closed. The Washington, D.C. Police Department tweeted that there was an "isolated incident at the US Capitol. There is no active threat to the public."

More like this
How The City Healed Five Years On From The Manchester Arena Attack
By Ella Glover
Michigan’s Governor Is “Going To Fight Like Hell” To Protect Abortion Access
By Andrea Zelinski
Plan C Vs. Plan B: What's The Difference?
By Lexi Inks
The 'It's A Sin' Creator Revealed A Massive Detail That Didn't Make The Final Cut
By El Hunt
Get Even More From Bustle — Sign Up For The Newsletter