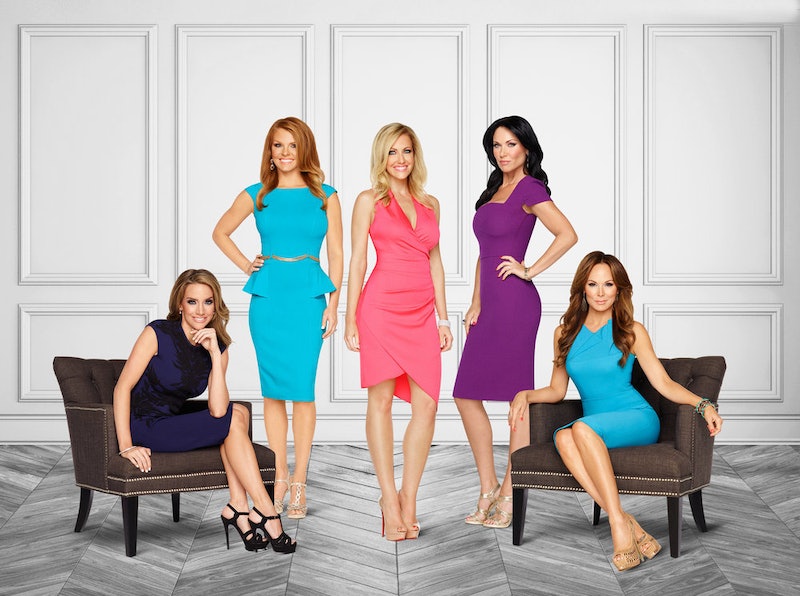 With each new Housewives spinoff, comes new faces, a new city, and new taglines. And now, the Real Housewives of Dallas Season 1 taglines and intro sequence are here courtesy of Us Weekly. Basically, it's time for you to figure out whether or not Bravo's latest series is one you'll tune into. Also, it's time for you to decide whether or not you could come up with something better than what these ladies are throwing down. There's no doubt that Real Housewives taglines are very telling about what's to come and usually give insight into the women who are about to become a permanent weekly fixture on your TV for the weeks to come.

So, do the RHOD ladies have it? One thing is for certain: They are ready to be front and center. I think it's pretty clear from their quotes that these Dallas socialites won't be told what to do, won't put up with any unnecessary drama, and won't ever be shoved to the sidelines.

Granted, I could easily be misreading their taglines, but I guess I'll just have to be wait to be proven right (or wrong) when RHOD premieres on Bravo Monday, April 11 at 10 p.m. Until then, let's discuss the taglines presented by these five new Bravolebrities and try to predict what's ahead from them this season.

"I was a Cowboys cheerleader, but in Dallas, I'm never on the sidelines." —Brandi Redmond

Don't ever judge a cheerleader (or anyone) by the cover, including Brandi. Based on the RHOD trailer, Brandi is living up to her tagline, because she is shown saying, "I have no respect for her and I'll tell that to her face." I think it's safe to say Brandi will not be seen hanging out on the sidelines cheering for someone she doesn't agree with.

"I came home to Dallas to shine my light, not to fight." —Tiffany Hendra

Clearly, Tiffany is a lover not a fighter — or that's what she wants you to think. In the trailer, she says to one of the other women, "Your relationship with your husband is shaky, we all know that." Whoa. It sure seems like Tiffany isn't afraid to get her hands dirty. I have a feeling there's more than meets the tagline with her.

Think what you want, but Cary seems confident in what she's bringing to the table. Based on her tagline, she's proud of herself and what she's accomplished. It also seems like Cary is someone who can juggle it all. I mean, the trailer shows her in her nursing scrubs and dishing out this line: "Why are you trying to act like this Dallas socialite? You have to be born into that." Basically, she is a professional multi-tasker who doesn't stand for other peoples misconceptions about her.

"I'm the girl next door — if you live in a big old mansion." —Stephanie Hollman

I guess Stephanie is reinventing what it means to be "the girl next door." From her huge house to that huge diamond ring she's seen trying on in the trailer, Stephanie seems to like the finer things in life. That said, even though she might describe herself as someone who is approachable and sweet, it doesn't seem like all of the Housewives agree. If you take a look at the trailer, she has quite the altercation with LeeAnne after Stephanie says to her, "That's not classy." Maybe Stephanie will cause more drama than a so-called "girl next door" normally would?

"I grew up a carnie kid — play games with me and you're gonna pay." —LeeAnne Locken

Well, LeeAnne is not one to be messed with. Plus, she can probably beat anyone at carnival games. But, seriously, don't mess with her, because she will put you in your place and speak her mind. As showcased in the trailer, she throws what appears to be a glass, is called "not classy" by Stephanie, and then gets in Stephanie's face and says, "You know what's classy is that you stand up for a little piece of sh*t trash." Yeah, LeeAnne appears to be quite the force on RHOD.

What do you think? Will you give RHOD a shot? I don't know why you wouldn't. I mean, I definitely need to hear more about LeeAnne's days as a "carnie kid."