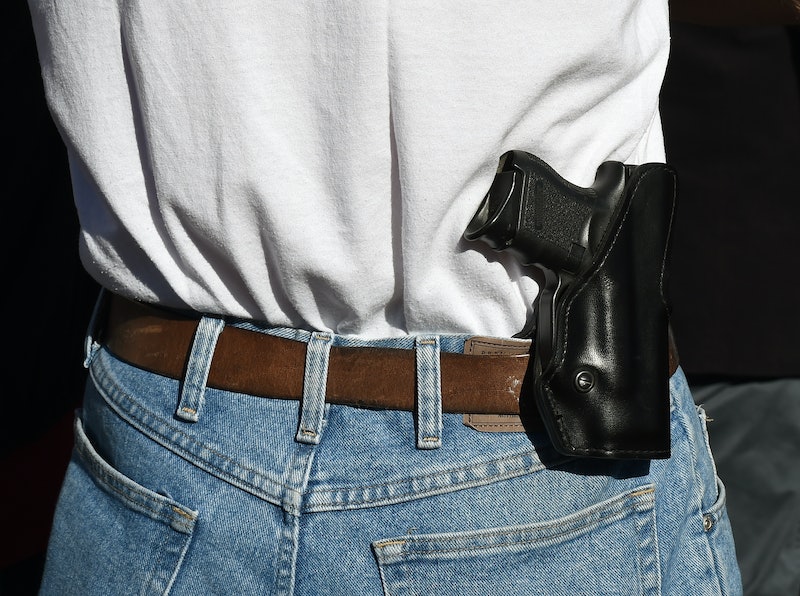 If you've been following political news lately, then you've likely heard about the Republican National Convention, set to happen in July 2016. Similarly, if you've been keeping up with this year's presidential election season, then you've assuredly witnessed how volatile and combative the events can become. Now, after many debates and discussions about gun control and Second Amendment rights, more than 45,000 people have signed a petition to allow attendees to carry concealed weapons at the Republican National Convention. But it turns out that the petition is fake.

As of 7:00 a.m. on March 28, the petition had 35,000 signatures, but by that afternoon, the it had amassed 45,741. That means more than 10,000 people signed the petition in a matter of hours and after it was revealed not to be real. Quicken Loans Arena, the host site for the convention, strictly prohibits firearms or other weapons on their premises. However, because Ohio is an open carry state, the petition argues that forbidding members from carrying concealed weapons at the convention "is a direct affront to the Second Amendment and puts all attendees at risk."

On its website, Hypernationalist has claimed responsibility for the previously anonymous Change.org petition, which has quickly gone viral. There is little information on Hypernationalist's website, so it is unclear what type of organization they are or who is behind it. Hypernationlist did not respond to Bustle's request for an interview. In any case, even if the petition is fake, there were likely some serious supporters among the more than 45,000 people who signed it. The petition echoed many supporters' arguments — namely, that an anti-gun area puts everyone at risk if there is an active shooter around:

As the National Rifle Association has made clear, 'gun-free zones' such as the Quicken Loans Arena are 'the worst and most dangerous of all lies.' The NRA, our leading defender of gun rights, has also correctly pointed out that 'gun free zones ... tell every insane killer in America ... (the) safest place to inflict maximum mayhem with minimum risk.'

Cleveland, Ohio is consistently ranked as one of the top ten most dangerous cities in America. By forcing attendees to leave their firearms at home, the RNC and Quicken Loans Arena are putting tens of thousands of people at risk both inside and outside of the convention site.

Despite the pro-gun argument, it became clear that no such thing would be happening when the Secret Service shut down the petition and said that no guns would be allowed within the perimeter of the convention.