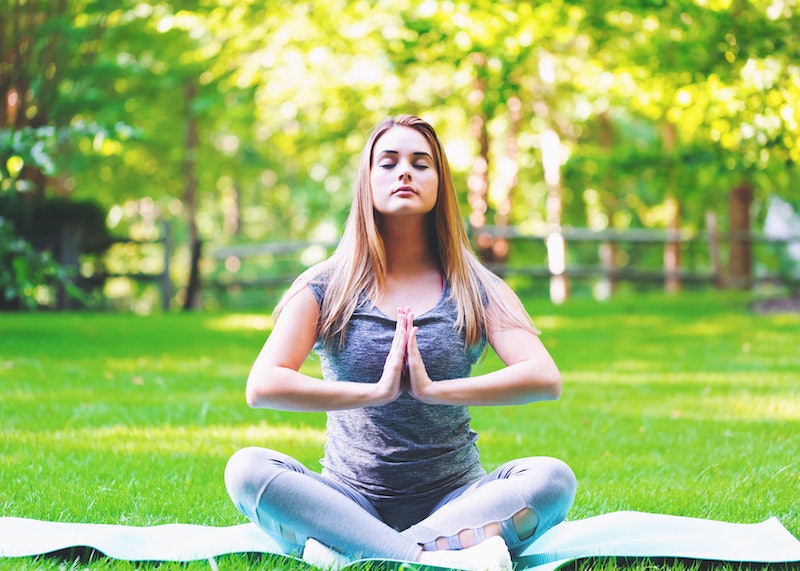 I want to be clear, before going any further, that I am not a yoga master. I am not even, like, an intermediate yoga... human. I am a beginner. And because I am currently in the process of learning how to, you know, touch my toes, I feel like I'm constantly discovering things no one tells you about starting yoga. Little-known facts. Like, regardless of your expectations, the kind of sweating you will do during your first hot yoga class is unlike anything you've ever experienced. To say it pours out of you is not hyperbole. Or that you are not nearly as in tune with your body as you think.

Personally, I started doing yoga as a way to manage my anxiety and depression. Sure, if I got bigger muscles or whatever because of it, that would be awesome, but I needed it as an emotional coping mechanism. I wanted to be more mindful and present. Spending time several times a week focusing exclusively on my body and my breathing was (and is) a way to get out of my head. It's hard to worry about Trump becoming elected and ebola and global warming and my bank statements if I'm also trying to balance on one leg while closing my eyes and breathing from my core. Plus, the rush of endorphins after I've finished a class is enough to carry me through any sort of stressful situation.

So whether you're into yoga for the workout or the mental game, here are a few hot tips that no one tells you when you're just starting out. From me to you. Namaste.

1. There Are A LOT Of Different Kinds Of Yoga

It's not all just people touching their toes together! There's Ashtanga, which became popular in the West in the 1970s. Ashtanga is rigorous and relies on a specific series of postures, each tied to a breath. Vinyasa, sometimes referred to as "Vinyasa flow," is very similar to Ashtanga in terms of rigor and poses, though it doesn't rely on the same sequences for every class, as Ashtanga does. Bikram yoga, a celeb favorite, was created and trademarked by Bikram Choudhury, and involves 26 sequences performed in a super heated room. It's tough. Restorative yoga relies on a lot of props, including blocks and blankets. It's kind of like therapy, tbh.

Personally, I'm a Vinyasa flow gal. It keeps me on my toes (literally) because no two classes are the same, it works my core and my arms, and it pushes me physically.

Yes, yoga is stretching, but if you're not used to stretching, your muscles will hurt the next day. You're going to be loosening some chronically tight muscle groups. Hurts so good, you know?

3. Bring A Towel To Class

Ah yes, my very first yoga class, when I became so covered in sweat that I could not hold a single position because my feet were constantly slipping. Sweat was pouring out of my body. Don't make my mistakes and slip on your own skin. Bring a towel. Trust me.

When I started yoga, I was very excited to dress like how I imagined ~yoga ladies~ dressing: Leggings and flowy-ass shirts. Turns out, I was right about half of that ensemble — the leggings part. Loose-fitting clothing gets in the way of a lot of moves, and if your body is hidden, then neither you nor the instructor can check on your form. Which brings me to my next point:

Even the most basic, well-known moves, like Downward Dog, require you to pay attention to form. It's a weird feeling, being hyper-aware of your body for an extended period of time. There's a good chance you're going to initially feel super discombobulated, but embrace that feeling and use it help you advance in your practice. And don't get your feelings hurt if it feels like the teacher is singling you out or corrects you a lot. It feels embarrassing, but I promise you'll be better for it.

6. You're Going To Think About Breathing In A Whole New Way

A big part of yoga is breathing through moves. It can be disorienting to thinking consciously about breathing, and differentiating between inhaling and exhaling. If I'm feeling tight during the day, even just paying attention to my breathing for a bit will leave me looser and more mindful and in the moment.