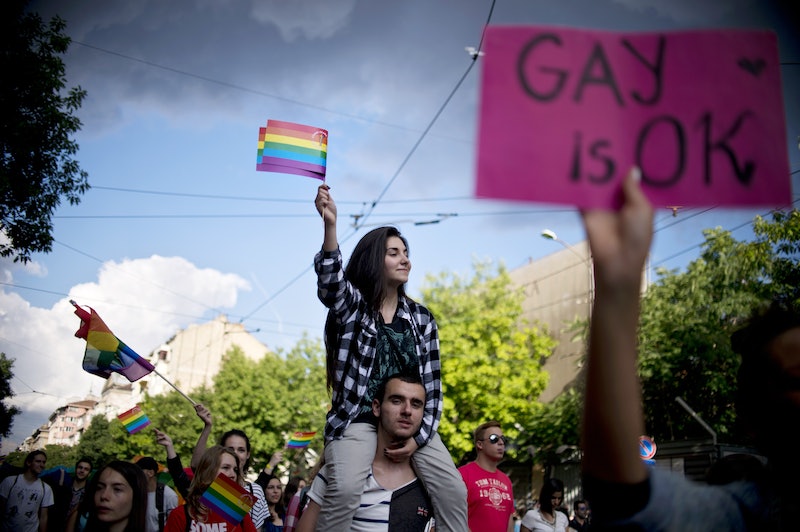 There hasn't been a lot for the LGBT community to celebrate this year so far. With 175 anti-LGBT bills introduced in 32 states during the first two months of the year, conservative lawmakers seem to be waging war against the hard-fought (and long overdue) progress lesbians, gays, bisexuals, and transgender people garnered last year. With a legislative backlash against LGBT rights seemingly on the rise, the Georgia governor's decision to veto House Bill 757, a sweeping anti-LGBT bill, is a victory worth celebrating.

Georgia Gov. Nathan Deal announced Monday that he had vetoed controversial House Bill 757, known as the Free Exercise Protection Act by supporters, which would have allowed loosely-defined "faith-based" organizations and individuals to deny service or employment to LGBT people on the grounds of preserving their religious freedom. "I do not think that we have to discriminate against anyone to protect the faith-based community in Georgia," Deal said at a press conference. He said that he felt the bill did not represent Georgia, a "welcoming state filled with warm, friendly and loving people."

In light of our history, I find it ironic that today some in the religious community feel it necessary to ask the government to confer upon them certain rights and protections. If indeed our religious liberty is conferred by God and not by man-made government, we should heed the “hands-off” admonition of the First Amendment to our Constitution. When legislative bodies attempt to do otherwise, the inclusions and omissions in their statutes can lead to discrimination, even though it may be unintentional. That is too great a risk to take.

Proponents of the bill denied critics' claims it would have sanctioned discrimination, arguing that the legislation was intended to protect faith-based organizations from providing services that "violate" their religious beliefs or from having to hire employees with religious views that conflict with their own. But although the bill passed easily through Georgia's House and Senate, it faced wide opposition from both in and outside the state.

Deal was encouraged to veto the bill by a lengthy list of major corporations and Hollywood A-listers brought together on the issue by the Human Rights Campaign, an LGBT rights advocacy group. "Our message to Governor Nathan Deal was loud and clear," HRC President Chad Griffin said in a statement Monday. "This deplorable legislation was bad for his constituents, bad for business and bad for Georgia’s future. Today, Governor Deal ... has set an example for other elected officials to follow."

In the nine months since the Supreme Court legalized same-sex marriage nationwide, there has been a surge in backlash against gay rights, making it clear that although advocates have won a battle, they've yet to win the war. Just last week — shortly after South Dakota Gov. Dennis Daugaard vetoed an anti-transgender "bathroom bill" — North Carolina signed a broad anti-LGBT bill into law which eliminated legislation protecting against LGBT discrimination and which prohibited transgender people from using public bathrooms corresponding to their gender identity. The bill's passage was a devastating blow to the state's LGBT community and activists.

The fight to ensure that the rights of the LGBT community are legally protected nationwide is unfortunately far from over. And though Georgia's House Bill 757 will not be the last "religious freedom" bill we see, we can hope Deal and Daugaard's vetoes will indeed serve as examples for other state legislatures.