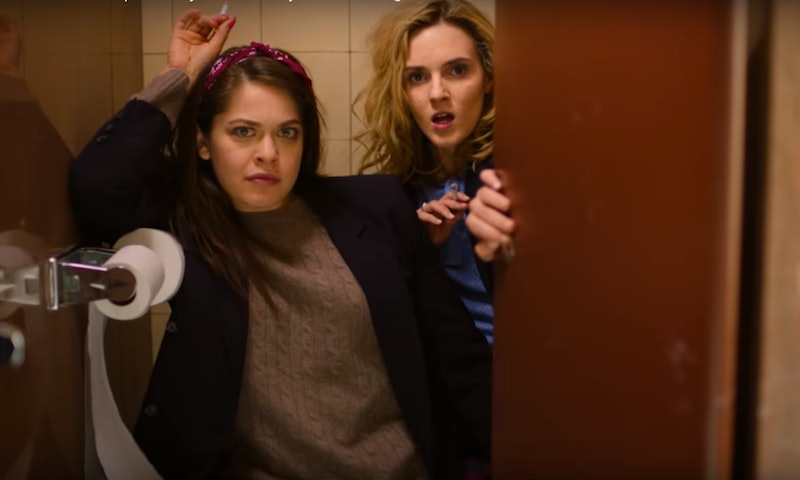 Throughout this election, one question has nagged at me: Is Donald Trump really the man behind his tweets? Trump unquestionably has the most entertaining Twitter account out of all the Republican presidential candidates, which is actually quite impressive, as there were 17 of them at one time. His tweets are incendiary, conversational, and on more than a few occasions just downright mean, drawing critics to liken his style to that of a child flinging insults. However, despite multiple accusations that Trump's campaign resembles little more than schoolyard bullying, little analysis has been done on the matter ... until now. Enter Nylon and mean teenage girls reading Trump's tweets.

Nylon turned to a few actresses for help, having them read real tweets from Trump in a high school setting to answer the question: Is Donald Trump actually just a really mean teenage girl? The plaid skirts might be a little creative license, but the snark and cattiness are all Trump. "Donald Trump is — and, if we’re honest — always has been a Mean Girl. Yes, despite his misogyny, his career, and his 69 years of being a human male, Trump is, deep in his heart, the meanest of mean high school girls," Nylon's Gabriel Bell writes.

Now, it's unclear if Trump is truly behind the tweets we so love to hate. Most presidential candidates leave the tweeting to their campaign staff. For example, the Twitter account of Democratic presidential candidate Hillary Clinton makes it clear that any tweet sent by Clinton herself will be signed -H. Gov. John Kasich's Twitter bio includes a similar clarification. Sen. Bernie Sanders' Twitter notes simply "tweets by staff." But neither Trump nor Sen. Ted Cruz's Twitter accounts contain a hint as to who's really doing the insult-flingin' ... I mean tweeting.

NBC News' Katy Tur reported earlier that Trump refused to answer whether he writes his own tweets. Tur said it was likely Trump didn't write his own tweets, but rather dictates them. A Mother Jones investigation into who runs Trump's Twitter came to a similar conclusion in September. A month later, however, The New York Times reported that though Trump dictates tweets to his assistant during the day, he "types them himself at home or on the golf course."

Sure, you can dismiss Nylon's presentation of Trump's most catty tweets as frivolous fun meant to break up banal election commentary. But there is truth to their claim that Trump sounds more Mean Girl than presidential. The video aims to inspire more much-needed conversation around how Trump's level of maturity plays into his potential to be president. Do we really need a Regina George in the White House?

More like this
Twitter Is In Utter Meltdown After 'Derry Girls’ “Poignant” Finale
By Sam Ramsden
The Viral TikTok “30,000” Sound Fits Nearly Every Scenario
By Courtney Young
Kris Jenner’s Advice For Kim Kardashian Is Going Viral On TikTok
By Courtney Young
TikTok’s “Miley Stewart Summer” Trend Will Make You So Nostalgic
By Courtney Young
Get Even More From Bustle — Sign Up For The Newsletter