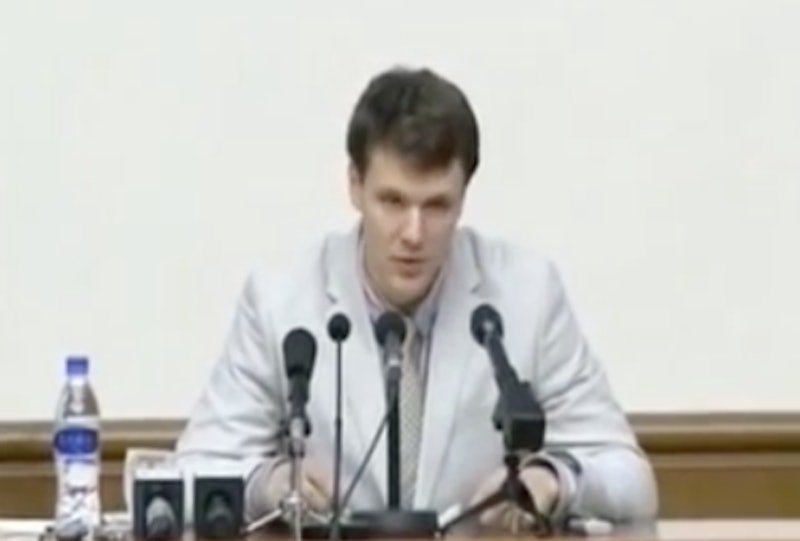 On March 16, American college student Otto Warmbier was sentenced to 15 years of prison and hard labor in North Korea for allegedly attempting to steal a political propaganda poster from his hotel in Pyongyang. The punishment raised eyebrows around the world, eliciting criticism of the regime from the White House, American officials, and human rights activists. Only hours later, the Obama administration announced broad new sanctions against North Korea in the shipping, mining, energy, and financial service sectors, making already-tight tensions tighter between the two countries. Warmbier's press conference in North Korea, which took place prior to his sentencing, is available to watch, though not everywhere.

The conference is available via YouTube, and is approximately 37 minutes and 39 seconds long. Warmbier describes his actions and his motivation, recounting his evening at the hotel and the reasons behind his decision to remove the poster. In his speech, he explains why he put the poster down and did not steal it, which thus far has made no difference in his sentencing.

The act, which was considered hostile by North Korea, was no more than a college prank as far as American officials and politicians are concerned. John Kasich, Governor of Warmbier's home state of Ohio, called the 15-year sentence "completely unjustified" and noted, "The sentence North Korea imposed on him is an affront to concepts of justice." North Korean state news, on the other hand, painted Warmbier's visit as an attempt at "bringing down the foundation of its single-minded unity." Warmbier's own perspective is, as one would expect, one of great regret:

I made the worst mistake of my life.

Deputy Asia director for Human Rights Watch, Phil Robertson, referred to the punishment at "outrageous and shocking." Warmbier's initial incentive to take the poster was a dare by a member of his church, with a reward of a used car worth $10,000 if he went through with it. He was also offered membership to his school's secretive Z Society by a member who encouraged the act in the name of "spreading freedom." During his press conference, Warmbier apologized:

I apologize to each and every one of the millions of the Korean people, and I beg that you see how I was used and manipulated. I was used by the United States administration, like many before.

Warmbier was detained on Jan. 2, just as he was boarding a plane to leave the country, according to his tour agency, Young Pioneer Tours.