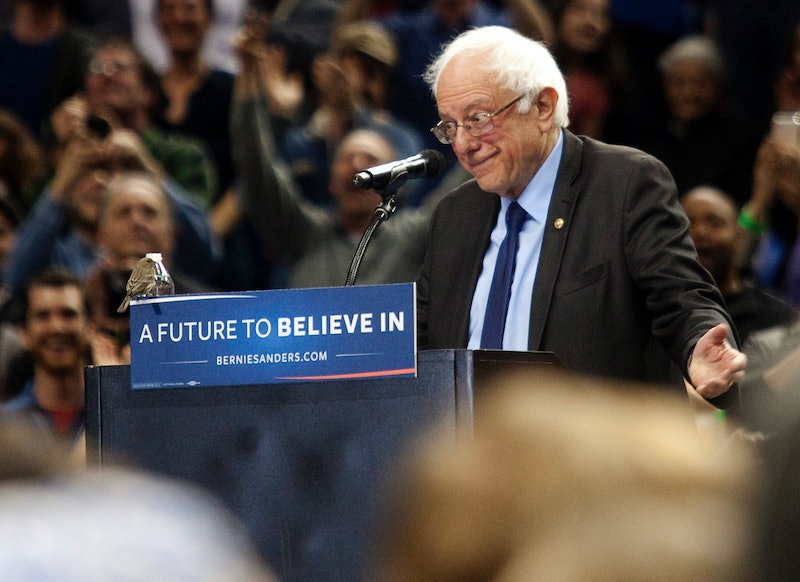 A day after Bernie Sanders proposed that he and Hillary Clinton have a debate in New York, Clinton's chief strategist Joel Benenson said that there would be no more debates until Sanders changes his “tone” and stops running negative ads. To many, Benenson’s comments came across as disingenuous and hypocritical, and before long, Sanders' supporters launched the #ToneDownForWhat hashtag to rebut him.

“Senator Sanders doesn’t decide when we get to debate, particularly when he’s running a very negative campaign against us,” Benenson said on Monday. “Let’s see if he goes back to the kind of tone he said he was gonna set early on. If he does that, then we’ll talk about debates.” Sanders supporters took issue with these comments for a few different reasons. For one, despite what Benenson said, Sanders’ ads really haven’t been all that negative, and their “tone” is easily within the standards of modern-day campaign advertising. Furthermore, it’s not like Clinton has run a uniformly positive campaign, either. And moreover, what does the “tone” of Sanders’ ads have anything to do with it? Debates are part of the democratic process, not rewards for good behavior.

Sanders fans voiced their displeasure with #ToneDownForWhat on Twitter:

As one Berner pointed out, Clinton said in 2008 that “you should be willing to debate anytime, anywhere.”

Even former 2016 candidate Rand Paul got in on the fun:

Berniestan’s frustration is warranted. And yet at the same time, Team Clinton’s thinking makes plenty of sense. When you’re the heavy frontrunner, as Clinton is, debates offer few benefits and a lot of risks — namely, the possibility of an embarrassing gaffe or slip-up on national TV. It could be worth if if Sanders was proposing a debate in a state where the polling is very close, like Wisconsin. But Sanders suggested New York, and Clinton is already on track to score a blowout victory there.

What’s really going on, then, is that Team Clinton simply doesn’t want to rock the boat. She’s got the lead, and she has nothing to gain by putting herself up to scrutiny on a debate stage yet again. Sanders fans may not like it, but from her standpoint, it’s really the only logical choice.