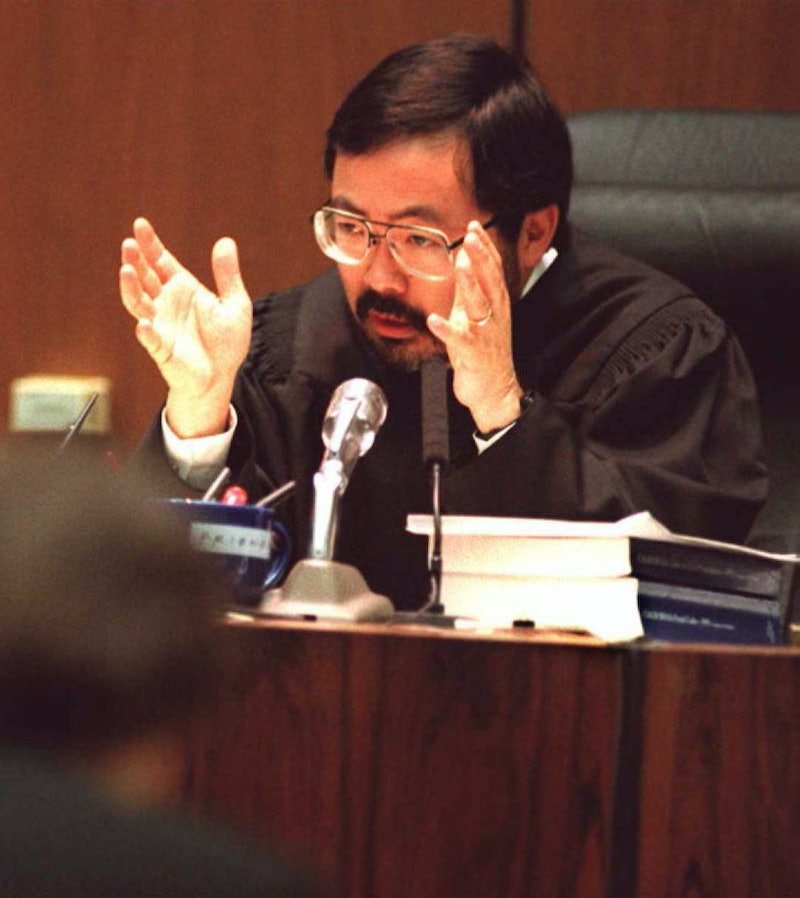 In the March 29 episode of The People v. O.J. Simpson: American Crime Story, "Manna from Heaven," viewers were once again reminded that truth can be stranger than fiction. When Simpson's defense team learned of the now-infamous Fuhrman Tapes, they fought tooth and nail for the audio to be played for the jury. The tapes and transcripts are best-known for the detective's disturbing use of racial epithets and his descriptions of police brutality — but a lesser-known fact is that Judge Lance Ito's wife is mentioned on the Fuhrman Tapes.

Upon the discovery of the tapes, Sarah Paulson's Marcia Clark alerts her boss that "our star witness hates the judge's wife" and we hear Fuhrman state that: "I hate Peggy [York]... It sickens me that she's an officer." As we saw on Tuesday's episode, Ito temporarily stepped aside when he learned that his wife was mentioned on the tapes. After moving the conversation to open court, Ito struggled to keep his emotions in check as he made the following statement:

I love my wife dearly and I am wounded by criticism of her, as any spouse would be. I think it is reasonable to assume that that could have some impact. Women who work in male-dominated environments are tougher than most and if they're successful, they are targeted for this kind of treatment.

As reported by CNN, the first half of this statement is nearly identical to what Ito said in real life. On the show, the camera pans to Clark and she appears to be moved by his words about sexism. After all, she was the only woman in a room full of lawyers and she'd been subjected to sexist attacks by both Simpson's defense attorneys and the media. Interestingly, news reports about this hearing make no mention of Ito bringing up the issue of struggles faced by women in male-dominated fields — so it doesn't appear that Ito discussed the broader issue of sexism during this hearing.

Since American Crime Story premiered, Clark has directly addressed the way Ito treated her throughout the trial — and she has strong claims about the sexism she faced in the courtroom. In an interview with Vulture, Clark stated that Ito's treatment of her was far more upsetting than anything the media threw her way:

Obviously I was aware that the media was giving me a bad time about my appearance. They slammed my hair, my makeup, and I didn’t care. Because what I cared about was that jury. And so what was hugely upsetting to me was the sexist treatment I got from the judge. That was happening on a daily basis, and nothing could be worse for a lawyer than to be undermined in front of the jury by a judge because the jury takes their cue. To the extent that the judge treats you like an idiot, the jury says, She's an idiot. And he treated me like a second-class citizen.

Ito has not participated in interviews or made any public statements about American Crime Story, so he has not responded to Clark's criticisms.

New York Magazine reports that the National Organization for Women became involved because it was such a major issue:

Tammy Bruce, the president of the Los Angeles chapter of the National Organization for Women... drafted a series of complaints about Ito’s treatment of Clark and other women during the trial and presented it to the judge. Bruce’s points included the fact that Ito had made a comment about the length of Clark’s skirt and his threat to hold Clark in contempt of court after the use of profanity in her opening statement — despite his failure to censure defense attorney Robert Shapiro for the same offense at other points in the trial. Bruce also noted the judge’s failure to reprimand defense attorneys who had described Clark as “whining” and “overly emotional.”

Bruce also assembled video clips of Ito demeaning Clark and showed them to the judge. Clark told New York Magazine that he temporarily treated her with respect, but then reverted back to his old ways. However, the fact that NOW became involved and presented evidence of sexist behavior indicates that Clark wasn't the only one who suspected that there was an issue. Ito's supportive statements about sexism in "Manna from Heaven" appear to be a rare instance where American Crime Story deviates from reality.