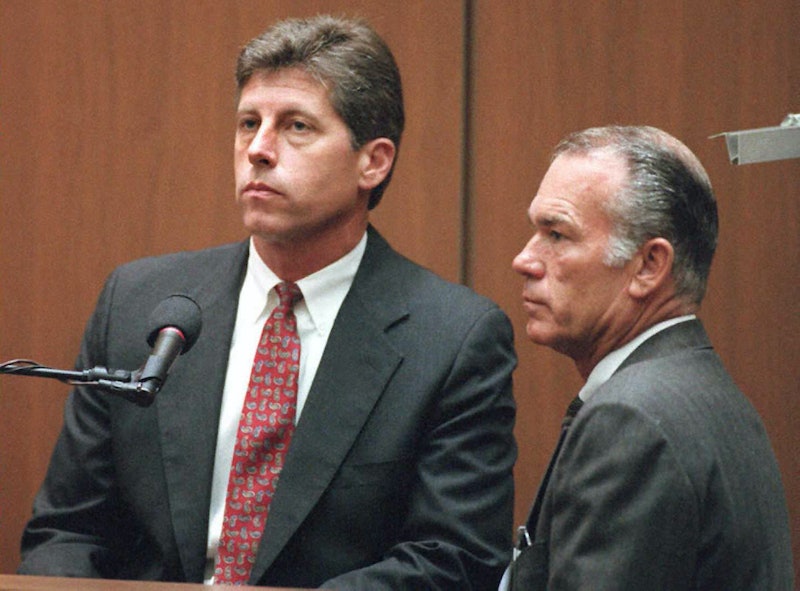 FX's American Crime Story is a riveting retelling of the O.J. Simpson murder trial, but it's also a fascinating look at the country's race relations at the time, particularly in Los Angeles. Not only did the trial occur only a few years after the 1992 Los Angeles riots, but it called into question the reliability of the LAPD and its officers — notably Mark Fuhrman. The detective came under fire for racist remarks he made in an interview, but the trial's jury was only allowed to hear a small section of these incendiary tapes. According to the LA Times, these are the sentences from the Fuhrman tapes that the jury heard.

They [female police officers] don't do anything. They don't go out there and initiate a contact with some 6'5" n***** who's been in prison seven years pumping weights.

The LA Times reported in the aforementioned article that Fuhrman used the N-word 42 times in his taped interviews with screenwriter Laura Hart McKinny, for whom he was acting as a consultant on a movie script. Their conversations took place from 1985 until 1995 and Fuhrman was fully aware he was being taped, according to the Chicago Tribune. CNN reported that Judge Lance Ito chose those sections for a reason. "The court finds the probative value of the remaining examples to be substantially and overwhelmingly outweighed by the danger of undue prejudice," Ito said, as reported by CNN.

It's worth noting that the CNN article mentions a different second sentence being chosen as one of the two, which a New York Times article corroborated.

McKinny: Why do they live in that area?Fuhrman: That's where n****** live.

However, both the LA Times and the Chicago Tribune went with the aforementioned second sentence about female police officers.

In this video, more excerpts from the tapes are heard, but note that this was when the jury was not present.

The tapes were used by Simpson's defense lawyers to discredit Fuhrman, who had previously stated under oath that he had not used the N-word in the past 10 years, reported the Chicago Tribune. Bustle reached out to Fuhrman for comment on the content of the tapes and received this response from his manager: "Mark is not commenting on the trial, nor is he watching [American Crime Story]."

As he was the detective who found the bloody glove at Simpson's house, the defense sought to use the tapes to get the jury to question Fuhrman's credibility. During the trial, according to The Los Angeles Times, when Detective Mark Fuhrman was asked on the stand, "Did you plant or manufacture any evidence in this case?" Fuhrman replied, "I wish to assert my 5th Amendment privilege."

Again, I want to remind you that all of this was happening only a few years after the LA riots that shook the City of Angels — and the country. And, because of that, there was a lot of outrage, raw emotion, and demonstration inspired by Fuhrman's remarks, even if they were not specifically about Simpson. According to the Chicago Tribune, prosecutor Christopher Darden pointed out that the Fuhrman issue was stealing focus of the trial. "I think the defense has clearly established that Fuhrman is a racist," Darden said. "Let's get back to the matter of trying O.J. Simpson for killing these two people."

Simpson was later acquitted in 1995. However, according to The New York Times, he was found guilty in the resulting 1997 civil suit and ordered to pay "$25 million in punitive damages to the families."