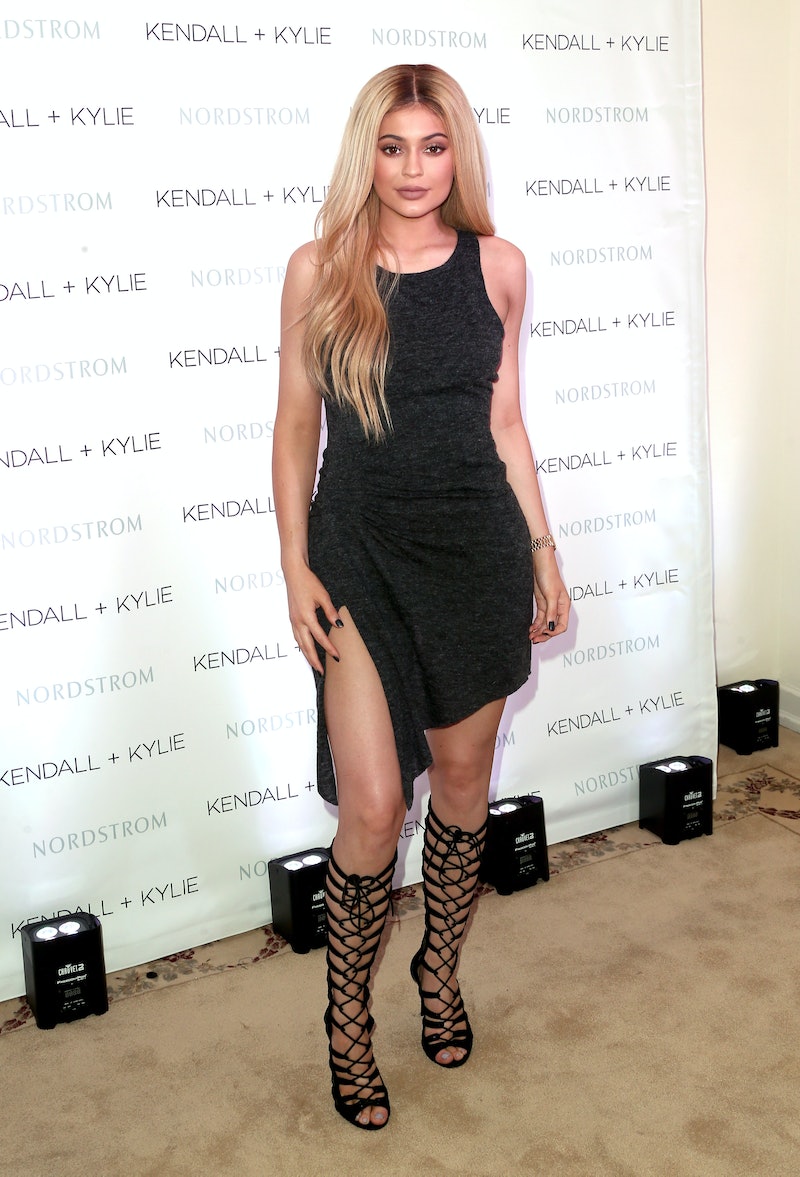 Fresh off her latest Lip Kit restock, which sold out again in just minutes (obviously), the littlest Jenner gal may have some more major news to share with the world. Word on the street is that Kylie Jenner might be filming a music video for her lip kits, which, if true, will surely send KJ fans into a frenzy bigger than ever before. The 18-year-old definitely knows how to keep us on our toes. Never in my wildest dreams did I imagine she would whip up a music video to promote her coveted lippies, which need no promotion at all, TBH. So, is Kylie Jenner really shooting a video for her lip kits?

According to The Daily Mail, Kylie was spotted on set in California with her beau Tyga sporting ultra vampy snakeskin pants with a matching bralette top, and a Louis Vuitton bandana draped over her blonde locks. She sure looked the part of a pop star, but does that mean she was actually emulating one for a promo video? Let's investigate a little further, shall we?

We all know that Kylie Jenner is a social media sensation. She loves documenting her every move on Snapchat, Instagram, and Twitter, so if she was shooting a video she'd likely tease it on her social feeds, right? The beauty maven did, in fact, send a cryptic tweet a few days ago reading, "Amazing day today. Secrets secrets."

Could she be referring to the said lip kit commercial?! It's certainly possible that she wants to keep the project under wraps until the big reveal, so a subtle subliminal message, like this one, makes perfect sense.

Check out the photos from the reported shoot.

Fingers crossed this rumor is true!

Stay tuned for more social media teasers from Kylie, because she is bound to spill the beans sooner or later.

More like this
What Are "Gym Lips" & Why Is BeautyTok So Obsessed With Them?
By Olivia Rose Ferreiro
Kylie Jenner Roasts Kendall For Her Cucumber Cutting Skills On TikTok
By Jake Viswanath
Kim Kardashian's Ombré Pink Mani Features A Nod To BF Pete Davidson
By Paris Giles
10 Swoon-Worthy Beauty Looks From The 2022 Cannes Red Carpet
By Olivia Rose Ferreiro
Get Even More From Bustle — Sign Up For The Newsletter