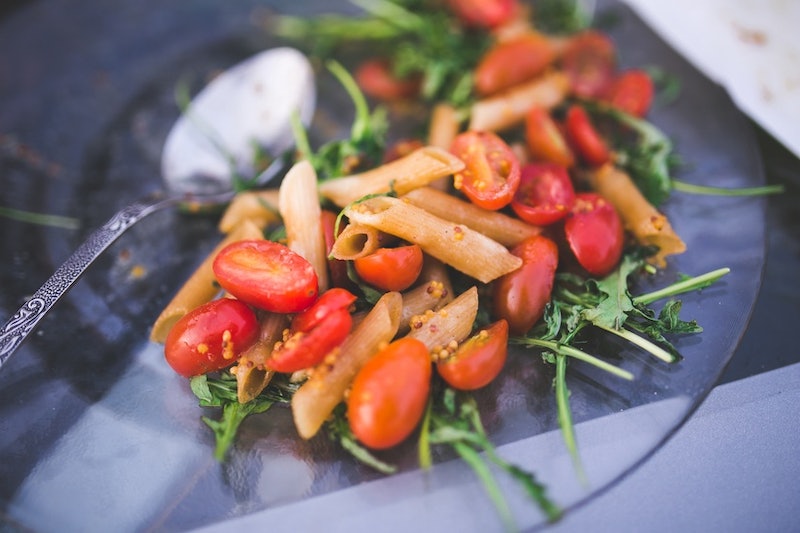 I woke up in the middle of the night recently, tossed and turned, and couldn’t fall back to sleep. After a while, I headed into the kitchen and ate seemingly everything in sight. I woke up wondering why I’d done that and Googling “what is Night Eating Syndrome?” I had to know, because this definitely wasn’t the first time it had happened. It was true I tended not to eat a lot during the day and go HAM (no pun intended) at night, but what did this mean? Ultimately, I found eating in this manner on occasion is not cause for concern, but for those who feel this is something they do regularly (or if you know someone who does), it might be beneficial to take a close look at the points in this article.

WaldenCenter.org noted Night Eating Syndrome (NES) is “an eating disorder, characterized by a delayed circadian pattern of food intake.” In other terms, regularly eating later versus earlier in the day. According to the National Institute of Mental Health, NES affects an estimated 1.5-percent of the population.

I spoke to Melissa Harrison, co-founder of the Center for Hope and Health in Philadelphia, Pennsylvania, who gave me some additional insight into NES. While the eating disorder is a relatively new diagnosis and is still very under-researched, there are some things they do know about NES. For instance, Harrison said there is some research to show people with NES have issues with hormones, including leptin. This, in turn, messes with how our bodies communicate with us about when we should eat, and when we should stop. Now that we’ve covered some basics, here are six things you need to know about NES.

1. The Majority Of Daily Calories Are Consumed Late At Night

As you perhaps assumed to be the case, those suffering from NES tend to eat at night. Harrison said, “NES is characterized by recurrent episodes of eating at night, specifically after falling asleep or consuming the majority of one’s calories for the day during the late evening.” Why does this occur? Harrison noted people with NES often report they are not hungry during the day, and therefore are not eating. Then, late at night, they turn to food.

2. NES Is Not The Same As Sleep Eating

Poor assumption on my part, but I always figured NES and sleep eating were two of a kind, but such is not the case. Harrison explained that with NES, “The person is aware of his or her behavior, which differentiates the disorder from those who engage in sleep eating.”

According to Forbes, people with Sleep-Related Eating Disorder (SRED) eat while they’re sleepwalking, so they’re not aware they are eating or what they are doing. They’ll then often wake up with plates in their bed without any recollection of eating a thing, the outlet said. Oppositely, those with NES are fully awake during that nighttime eating process, and therefore are aware of what’s been consumed. Yes, you might wake up from sleeping and head into the kitchen in the middle of the night, but you're more than aware that you're doing it.

3. It Is Also Different From Binge Eating Disorder

Just as NES and SRED are different, such are NES and Binge Eating Disorder (BED) — “an eating disorder characterized by recurrent episodes of eating large quantities of food,” according to the National Eating Disorders Association. In comparison to BES Harrison said of NES, “The episodes of overeating are only occurring at night, the episodes are relatively small in size (averaging about 300 calories versus BED where the average consumption of calories is usually above 1,500), and there is often no sense of loss of control at the time.”

4. Most Often The Goal Is To Fall Back Asleep

We’ve already discussed how many of those with NES report not eating during the day due to lack of hunger, so there’s an obvious hint as to why they’re then eating at night. However, you may be wondering if there are other contributing factors — and there are. Harrison said often the nighttime eating is motivated by the goal of trying to fall back asleep. She also added, “Many people who are engaging in night eating are experiencing trouble sleeping because of other disorders including insomnia, anxiety, depression, and overall life stressors.”

According to WaldenCenter.org, other contributors might be dieting itself (restricting calories during the day only to overcompensate at night) and developing a late-night eating habit (e.g., college students) and then being unable to break it.

5. NES Often Results In Feelings Of Guilt Or Shame

According to Forbes, the altered eating habits of someone with NES may lead them to feeling as though they don’t have control over their eating behaviors. This then often leads to feelings of guilt or shame. Other potential negative side effects include anxiousness, and low self-esteem, according to Casa Palmera Treatment Center.

6. Cognitive-Behavioral Therapy May Be The Best Treatment

If you’re reading this article and feel like some of these points hit home, it might be necessary to take action. Harrison suggested, “If you or someone you know is struggling with this pattern and eating frequently at night, it is helpful to seek the counsel of a therapist and a doctor. A therapist trained in Cognitive-Behavioral Therapy (CBT) can identify the behaviors and thought patterns that maintain this illness including the belief that food is needed to fall asleep, coping with life stressors without food, and the maladaptive pattern of not eating during the day leading to overeating at night.”

While more research is needed on the topic, hopefully the above helps to paint you a picture of what is known to date about NES. As mentioned, if you or someone you know might be battling with NES, it’s recommended that you seek the right help.