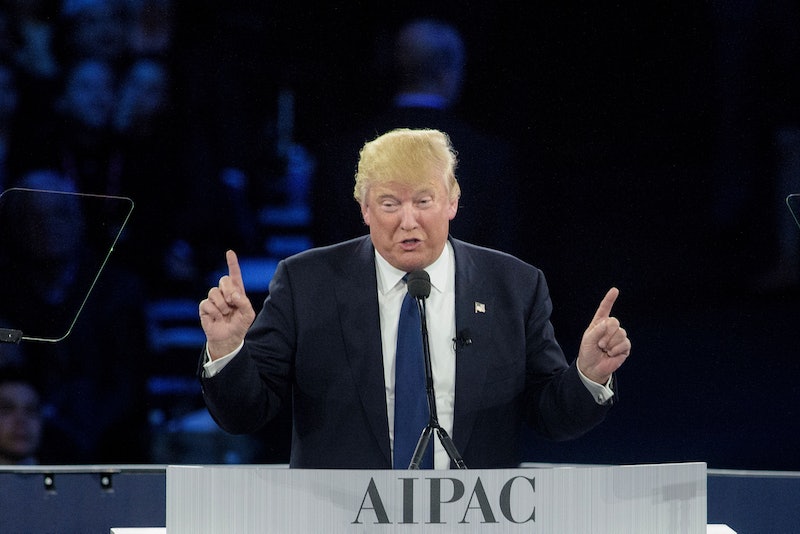 On Tuesday morning, the police department of Jupiter, Florida charged Donald Trump's campaign manager, Corey Lewandowski, with battery. CNBC reports that Lewandowski was brought in on charges that he grabbed the arm of journalist Michelle Fields at a Trump campaign event on March 8. Fields, a reporter for Breitbart, posted photos of the bruises she said were left on her arm, and on Tuesday morning the Jupiter police department released video footage of the event.

In response, Trump stated, "Mr. Lewandowski is absolutely innocent of this charge. He will enter a plea of not guilty and looks forward to his day in court. He is completely confident that he will be exonerated." This seems unlikely, as the newly-released footage clearly shows Lewandownski grabbing Fields and pulling her away from Trump. AOL reports that the maximum sentence Lewandowski faces is one year in prison and a fine of $1,000.

The Trump campaign's statement asserts that Lewandowski "was not arrested," and that he turned himself in for booking. Video footage released by the police department is below.

The Atlantic reports on how Breitbart , the publication which Fields wrote for is a conservative outlet that has been supportive of Trump's campaign. Therefore, it makes little sense that Lewandowski would try so hard to keep Fields away from Trump. (Fields has since quit her job at Breitbart.) After Lewandowski denied that he had grabbed Fields and referred to her as "delusional," Fields filed a police report on him. Trump's response to Fields' initial claims was similar — on Twitter, he stated that she probably made the whole thing up.

Trump campaign events have been fraught with violence. Now that the candidate's own campaign manager has been charged with physically harming a journalist, it will be difficult for Trump to continue to deny claims that his events can incite violence.