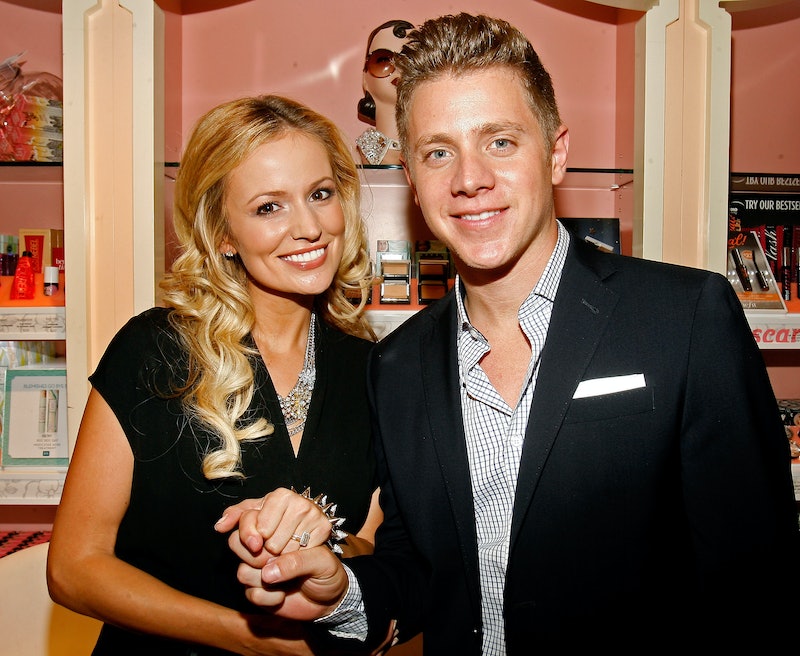 There is always a lot of speculation when couples are formed from The Bachelor franchise. These everyday people go from living their normal lives to becoming celebrities overnight, and on top of that, they are involved in extremely public romances. As we all know, most of the pairings from The Bachelor have not worked out, and it's actually pretty infamous at this point. To make matters worse, there are a bunch of cheating scandals with the Bachelor and Bachelorette winners. I guess that going from dating 25 people at the same time to just dating one person is a hard adjustment for some people.

Of course, we can never truly understand the situation without being in it ourselves, and of course we don't know these Bachelor and Bachelorette winners as personally as watching them find love on the show might have led us to believe. However, these fairy tales went badly very, very quickly — or allegedly so — and those cheating scandals are still the talk of the Bachelor Nation to this day. So, take my hand and have an open mind, because you'll need it when you remind yourself of these big news stories. You might even need to watch the shows again to remind yourself that love isn't, in fact, dead.

According to the rumors, Emily Maynard allegedly cheated on Jef Holm for most of their relationship. Jef's brother, Mike Holm, even made claims about Maynard to Us Weekly , saying, “I can tell you that it’s all 100 percent true. I was there and I heard the fight and watched the whole thing go down, Emily leaving and everything. I love my brother very much and, like the rest of our family, I just want him to be happy.” However, Maynard and Holm both denied the rumors in an interview with People; Maynard simply said, "It's 100 percent not true," while Holm tweeted about the situation.

None of us were in this relationship so it's hard to say exactly what happened, but the couple is no longer together.

After Ben Flajnik proposed to his Bachelor winner Courtney Robertson, the two had to go into hiding while their season aired before they could reveal their relationship, just like every Bachelor couple before them. However, unlike every Bachelor before, Flajnik was spotted holding hands with, kissing, and getting cozy with three different women in one weekend during this time, thanks to photos obtained by Us Weekly. He adamantly denied cheating accusations during the Season 16 After the Final Rose special, claiming all three women were just "long time friends," but it was tough to deny photographic evidence. Even though Courtney was pegged as the "villain" on Ben's season, anyone with a heart had to feel for her in this situation.

After the scandal and breakup with Flajnik, Robertson was devastated and got some comfort from fellow Bachelor Nation member Arie Luyendyk Jr. from Emily Maynard's season. The two ended up dating, and it became pretty public. As Robertson claimed in her memoir, I Didn't Come Here to Make Friends: Confessions of a Reality Show Villain, when the couple broke up, she was upset when Luyendyk Jr. posted a photo on social media with another girl. She checked out her profile and found out that Luyendyk Jr. was allegedly dating Robertson and this other woman at the same time. She said, "I clicked on her name and figured out that he was dating this woman, a born-again virgin, the entire time we were together. He'd often seen both of us on the same day. It was all right there on social media, if I'd bothered to check." Luyendyk did not respond to Robertson's claims, but apparently things are cool between the two of them now. In a February 2016 interview with Us Weekly, Robertson said, "He's a great friend who I like to make out with from time to time!"

There were some crazy rumors going around about former Bachelorette Andi Dorfman and her ex Josh Murray. Allegedly, Andi cheated on Josh with his own brother Aaron, meaning their seemingly out-of-nowhere breakup may have actually been due to infidelity. What makes the situation seem suspect is that Aaron Murray and his fiancée, Kacie McDonnell, randomly broke up immediately following Dorfman and Josh's split. Dorfman straight up denied it in a tweet.

The story seems too wild to be true, but it certainly made for gossip fodder when fans were seeking an explanation for the Bachelorette's breakup.

Whenever people do well on Dancing With the Stars and have a modicum of chemistry with their dance partner, there are bound to be romantic rumors. So it's not super shocking that people tried to pair up Chris Soules and his dance partner, Witney Carson, during Season 20, even though he was engaged to his Bachelor season's winner, Whitney Bischoff. Soules' representative told Gossip Cop that the cheating claims "were total nonsense," and that Soules and Bischoff were “secure and confident in their relationship.” Then, when Soules and Bischoff split, the rumors ran rampant that he was seeing his dance partner after all. Unfortunately for the rumor mongers, that claim didn't hold much water. After the split, Carson, who was not even single at the time, told OK! Magazine, "I hope [Chris] finds someone who supports his farming and is okay being in the middle of nowhere. He loves it so much. I hope he marries someone who supports that." That sounds like she's just a supportive friend to me.

There were stories circulating that Ed Swiderski was allegedly cheating on Jillian Harris with two different women during and after their season of The Bachelorette aired. The two dispelled the rumors during a Good Morning America appearance. Swiderski said, "It's actually not true at all. Jillian and I have been the target of being one of the very few successful couples on the show. We're clearly being targeted because we're happy." In the same appearance, Harris said, "This is nonsense. I feel like I'm in high school," adding that the rumors were "totally inaccurate" and "unfortunate."

Jake Pavelka and Vienna Girardi had a messy relationship after their season, to say the least. Us Weekly reported that Pavelka considered Girardi cheating on him to be "the final straw." Per the report, Girardi was allegedly telling people that she was single and "made out with" Greek actor Gregory Michael. Michael is even quoted as telling the publication, "She made it very clear they were not together." A third party making a statement to Us Weekly is a serious red flag. Girardi later defended herself via tweet.