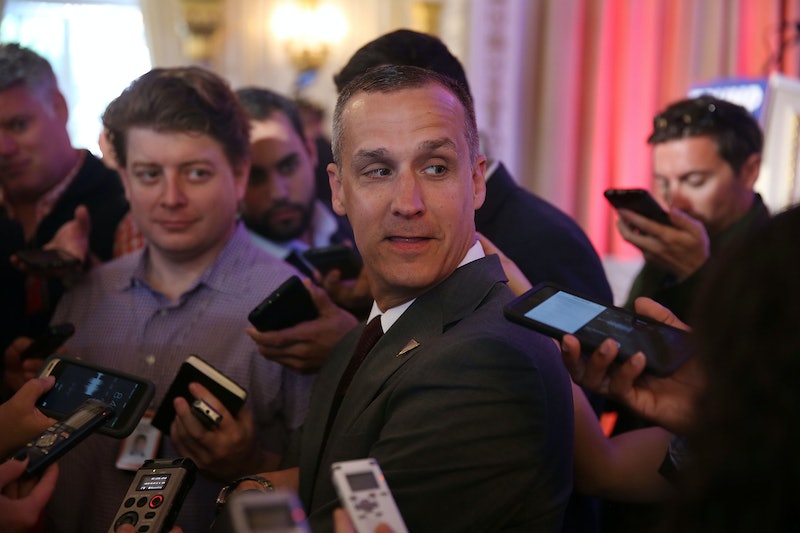 On Tuesday, the upstanding Donald Trump presidential campaign got even classier when Trump's campaign manager, Corey Lewandowski, was charged with simple battery for allegedly grabbing former Breitbart reporter Michelle Fields' arm at a rally. In any normal political situation, a campaign manager with assault charges would cripple a campaign. Also, he'd be fired. Lewandowski has consistently said he is innocent. But even after Lewandowski has been formally charged by police, Trump ardently defended him, calling him a "very decent man," of all things.

In fact, Trump turned the tables to suggest that Fields was the one who was guilty of something unsavory. "Look at the tapes — nothing there!" Trump tweeted. In truth, the available tape of the alleged incident appears to show Lewandowski grabbing Fields, according to the police report. Prior to his charges, Lewandowski also denied doing anything to Fields, and called her "delusional" for claiming he had hurt her. Some Trump supporters have jumped in defense of Lewandowski, and just like Trump, they've attempted to bend reality, even claiming that Fields' picture of her bruises is fake.

The sort of collective psychosis Trump and his supporters subscribe to is why Lewandowski's charges will not damage The Donald's campaign. To Trump supporters who wish to deny facts, Trump's defense of his campaign manager can actually look like loyalty.

Lewandowski's charges join a long list of ugly behavior. (Anybody remember Trump's attack on Heidi Cruz just last week? Or when he compared former rival and now-endorser Ben Carson to a child molester?) Even if Lewnadowski is convicted, I bet Trump will remain unscathed.

Trump has been able to avoid the negative consequences of comments and incidences one would have normally predicted to be the downfall of his presidential campaign, such as initially refusing to condemn the Ku Klux Klan in a CNN interview on account of knowing "nothing about white supremacists," and later blaming "a bad earpiece" for that lukewarm answer. When faced with his own sexist comments toward women on The Apprentice, Trump claimed it to all merely be part of "show business." Hell, Trump bragged at a rally in January that "I could stand in the middle of 5th Avenue and shoot somebody, and I wouldn't lose voters."

Like a black hole, Trump's campaign seems to absorb anything that comes at it. Scandals don't hurt it, but rather bolster it. None of Trump's past offenses have markedly hurt his campaign. He is still the Republican frontrunner, and his supporters only seem to grow more fervent with each accusation. Of course, the bewildering question here is: Why?

Well, Trump's consistent lying manifests itself as confidence, which is more appealing than constant apologies would be. Studies done by researchers at the University of California, Berkeley discovered that overconfidence increases your status regardless of whether there's evidence or accomplishments to back it up. Instead, the more confident you are, the more likely you are to be viewed as a leader — regardless of your actual ability. This painfully applies to the Trump phenomenon.

Lewandowski seems to be taking a page from Trump's book. While confidently championing his innocence, he's been painting Fields as the real bad guy, claiming that she was "delusional." The situation indirectly fits into an ongoing discussion on how the media may be inadvertently helping Trump succeed. Trump and his campaign are transforming a reporter's accusation and its coverage into something self-aggrandizing. No attempt to discredit him seems to slow his campaign, but rather appears to have the contrary — and advantageous — effect. A scarier question, then, may be this: If even Trump's campaign manager's battery charges won't hurt him, then what can?