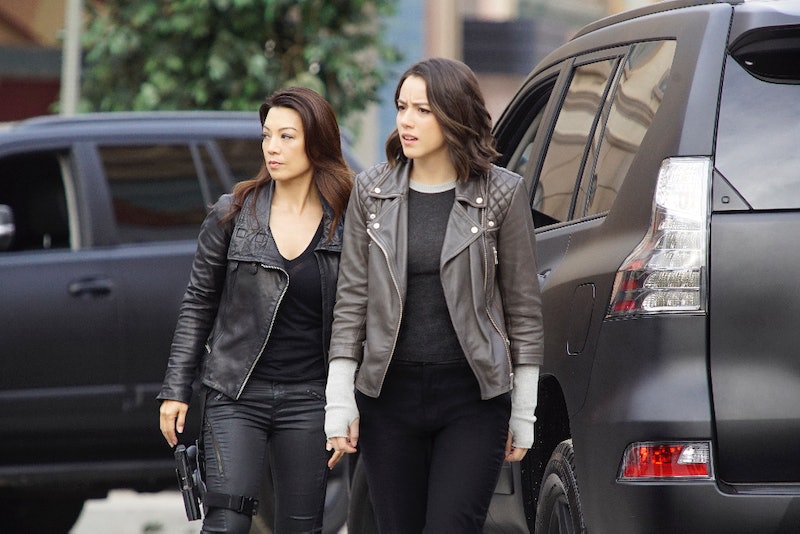 Saying that superhero television is different now than it was when we were kids, no matter how old you are, is a bit of an understatement. One of the benefits is the wealth of incredible female characters that have popped up — and in the Marvel universe, those characters have the opportunity to crossover from television to movies and even Netflix. In the spirit of Women's History Month, here are which female Marvel heroes should be on Agents of S.H.I.E.L.D. according to Chloe Bennet, who plays Daisy — or Skye, if you're not so good with change.

Bennet's S.H.I.E.L.D. character, Daisy "Quake" Johnson, will be added to the Marvel's Contest Of Champions mobile fighting game in the fall, an announcement that came in conjunction with their Women of Power celebration. Other characters joining the game include She-Hulk, X-23, and a personal favorite of mine, Kamala Khan. One of the thing that's interesting about this is that it gives this iteration of Daisy Johnson the opportunity to interact with Marvel characters from the comic books, the Marvel Cinematic Universe, as well as the X-Men universe that couldn't possibly make it onto the small screen for a variety of reasons.

"It's a cool way to blend all the characters together," Bennet says. "My favorite character is actually Jean Grey. The fact that I'll never get to face off against her ... is a bummer." Though while it would definitely be interesting to see Daisy and Jean face off in a fight (or a friendship), there are plenty of Marvel ladies who could cameo on Agents of S.H.I.E.L.D. in theory.

"I think Jessica Jones and Daisy Johnson would probably get on really well," she says. "There's this kind of rogue aspect about both of them. I think they would both gel well together. Jessica Jones and Daisy Johnson just Netflix-ing and chilling, you know?" Tonally, I absolutely agree. The private eye would be impressed with Daisy's computer skills, that's for sure. They could solve a lot of crimes together! Though I have to say, Daisy Johnson the S.H.I.E.L.D. Agent has come a long way since she was first discovered as Skye the hacktivist. She might be a little too corporate (or institutionalized) now for Jessica Jones — so yeah, maybe it's best if they just have a casual hang.

Keep your fingers crossed for that one, because another one of Bennet's wishes actually came true this season. "One of my favorite girls in the comic books was Yo-Yo Rodriguez, Slingshot, so when I found out that she was gonna get to be on the show I was so stoked. I think she's just a cool character. I think Talia, who plays her, does so well. She's so tough but so sweet, and they're really bringing to the show her aspect of Faith and how much that plays a part in her life. It's cool to see that on the show as well."

We've barely met Yo-Yo, who was first introduced on the ABC series as Elena Rodriguez, so I definitely can't wait to see what happens next with her. I think if there's one thing you can count on with Marvel it's that they'll always be serving us plenty of new and exciting female characters. We will never be wanting for more with Agents of S.H.I.E.L.D.