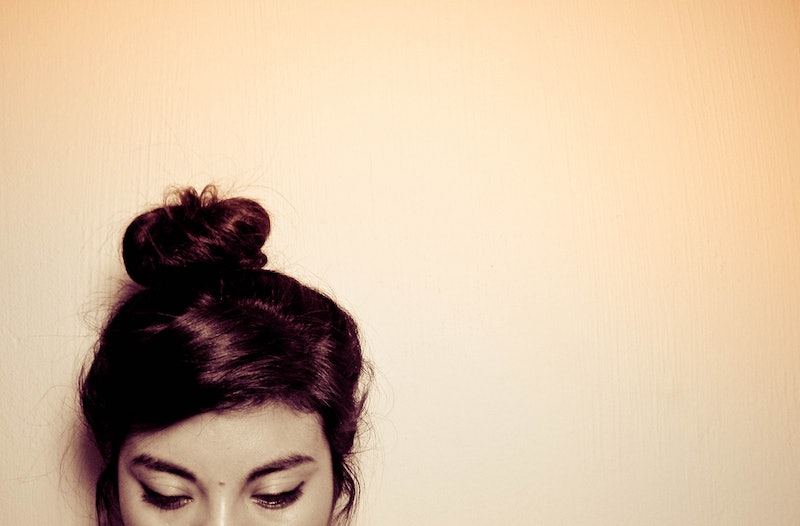 When it comes to breaking up, most people turn to wallowing in moody music, but turning to your favorite authors for heartbreaking quotes about breakups from books can be just as good. After all, writers are known for sadness and whiskey for a reason. And I won't stop you from flipping through sad books while you listen to Adele's "Someone Like You" on loop because we've all been there.

Yes, of course Hemingway appears here, and duh, the epitome of breakup books High Fidelty is on this list, too. Young adult literature really pins down what it feels like to break up with your first love, when it seems like you are going to be together for the rest of your life and suddenly it all comes crashing down. So there's a mix of classic literature, contemporary, and some new YA books. (Prepare for the John Green tears because he really knows how to bring out the heavy sobs.)

Just to break the fourth wall here: I started tearing up while reading this. So I'll apologize in advance if you're not currently going through a breakup and suddenly you are transported back to the worst time of your life. But if you are currently mid-breakup, just know that you'll find some common ground here with these 14 authors, and misery loves company.

1. "How can I be reasonable? To me our love was everything and you were my whole life. It is not very pleasant to realize that to you it was only an episode."

2. “It would be nice to think that as I've got older times have changed, relationships have become more sophisticated, females less cruel, skins thicker, reactions sharper, instincts more developed. But there still seems to be an element of that evening in everything that happened to me since; all my other romantic stories seem to be a scrambled version of that first one. Of course, I have never had to take that long walk again, and my ears have not burned with quite the same fury, and I have never had to count the packs of cheap cigarettes in order to avoid mocking eyes and floods of tears... not really, not actually, not as such. It just feels that way, sometimes.”

― Jenny Han, It's Not Summer Without You

4. “I think you still love me, but we can’t escape the fact that I’m not enough for you. I knew this was going to happen. So I’m not blaming you for falling in love with another woman. I’m not angry, either. I should be, but I’m not. I just feel pain. A lot of pain. I thought I could imagine how much this would hurt, but I was wrong.”

― Haruki Murakami, South of the Border, West of the Sun

5. “And that's when I know it's over. As soon as you start thinking about the beginning, it's the end.”

― Junot Díaz, This Is How You Lose Her

6. “Did you ever see the way the clouds love a mountain? They circle all around it; sometimes you can’t even see the mountain for the clouds. But you know what? … The clouds never cover the head. His head pokes through, because the clouds let him; they don’t wrap him up. They let him keep his head high, free.”

7. “when things break, it's not the actual breaking that prevents them from getting back together again. it's because a little piece gets lost ― the two remaining ends couldn't fit together even if they wanted to. the whole shape has changed.”

8. “Because you can never go from going out to being friends, just like that. It's a lie. It's just something that people say they'll do to take the permanence out of a breakup. And someone always takes it to mean more than it does, and then is hurt even more when, inevitably, said ‘friendly' relationship is still a major step down from the previous relationship, and it's like breaking up all over again. But messier.”

9. “If two people love each other, there can be no happy end to it.”

― Ernest Hemingway, Death in the Afternoon

10. “Ed, it was everything, those nights on the phone, everything we said until late became later and then later and very late and finally to go to bed with my ear warm and worn and red from holding the phone close close close so as not to miss a word of what it was, because who cared how tired I was in the humdrum slave drive of our days without each other. I’d ruin any day, all my days, for those long nights with you, and I did. But that’s why right there it was doomed. We couldn’t only have the magic nights buzzing through the wires. We had to have the days, too, the bright impatient days spoiling everything with their unavoidable schedules, their mandatory times that don’t overlap, their loyal friends who don’t get along, the unforgiven travesties torn from the wall no matter what promises are uttered past midnight, and that's why we broke up.”

― Daniel Handler, Why We Broke Up

11. “You can love someone so much... But you can never love people as much as you can miss them.”

12. “And I was ― this is just how I was afraid you'd take it. I knew it, that you'd think this means you were right to be afraid all the time and never feel secure or trust me. I knew it'd be 'See, you're leaving after all when you promised you wouldn't.' I knew it but I'm trying to explain anyway, okay? And I know you probably won't understand this either, but ― wait ― just try to listen and maybe absorb this, okay? Ready? Me leaving is not the confirmation of all your fears about me. It is not. It's because of them. Okay? Can you see that? It's your fear I can't take. It's your distrust and fear I've been trying to fight. And I can't anymore. I'm out of gas on it. If I loved you even a little less maybe I could take it. But this is killing me, this constant feeling that I am always scaring you and never making you feel secure. Can you see that?”

13. “I felt her absence. It was like waking up one day with no teeth in your mouth. You wouldn't need to run to the mirror to know they were gone”

14. “Denis's love for Mattia had burned itself out, like a forgotten candle in an empty room, leaving behind a ravenous discontent.”