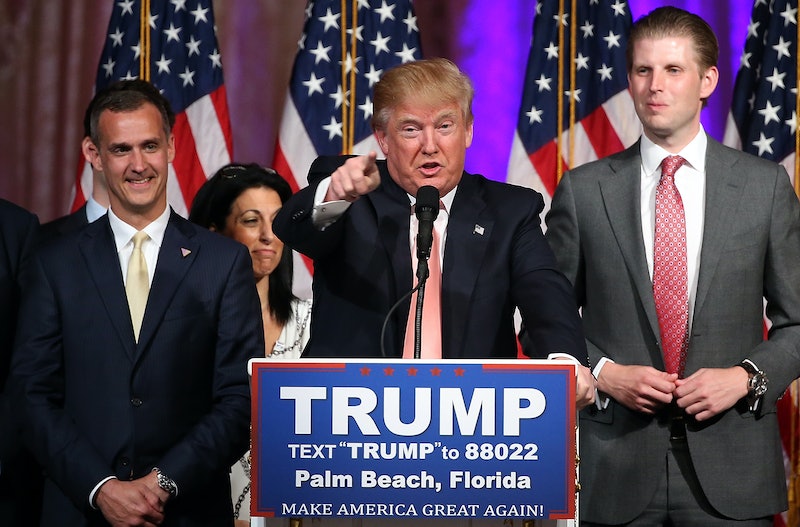 On March 8, GOP presidential frontrunner Donald Trump was leaving a press conference in Jupiter, Florida when Breitbart News reporter Michelle Fields approached him for a comment. She reportedly touched Trump's arm to get his attention, and was quickly grabbed by the arm by someone else — allegedly Trump's campaign manager Corey Lewandowski. The grab was reportedly so rough that she almost fell to the ground and was left with visible bruises. The state of Florida charged Lewandowski with battery on March 29, but the rhetoric coming from Trump's campaign is that Fields is "delusional" or "making it all up," and that "nothing happened." Trump took to Twitter on Tuesday to defend Lewandowski, calling him a "very decent man" and stating that if you look at the video footage, there's "nothing there!"

Ben Terris of The Washington Post saw the incident, and wrote:

I watched as a man with short-cropped hair and a suit grabbed her arm and yanked her out of the way. He was Corey Lewandowski, Trump’s 41-year-old campaign manager. Fields stumbled. Finger-shaped bruises formed on her arm. "I’m just a little spooked," she said, a tear streaming down her face. "No one has grabbed me like that before."

Fields' story was almost immediately treated as something she made up. Trump campaign spokesperson Hope Hicks released a statement on March 10 denying the accusations. Even with the released video footage, Trump's campaign adviser Sarah Huckabee Sanders told CNN's Jake Tapper, "I don't think anything happened ... Corey said from the beginning, 'Nothing happened here.'" Even after Lewandowski was charged with battery and video footage that appeared to show him pulling Fields was made available, Trump said that nothing happened, and his campaign released a statement which claimed that the campaign manager is "absolutely innocent," and that he would be "exonerated."

This instance of both blaming and accusing a woman of making up an assault — and one caught on camera, to boot — is dangerous. It also illuminates a larger systemic problem of violence against women, and the danger of accusing victims of lying about their abuse. In the U.S., a woman is assaulted or abused every nine seconds, and one in three women have been a victim of intimate partner violence. Every day, there are over 20,000 phone calls made to domestic violence hotlines, but only 25 percent of acts of physical violence against women are reported to the police each year.

According to a U.S. Department of Justice report, more than 99 percent of female victims of physical violence believe there is no reason to report their abuse to the police, because they couldn't do anything about it. Sixty-one percent of female victims stated that they wouldn't report their abuse because they didn't think the police would believe them. The fear of abuse being disregarded as untrue will leave women in dangerous circumstances, sometimes in situations of continued abuse that can end fatally. Victims of physical abuse also report higher rates of emotional and mental trauma, such as depression, anxiety, and PTSD.

Women who come forward about experiences of physical assault need to be heard, trusted, and taken seriously. Being accused of lying about abuse is a re-victimization of women who have already suffered physical violence. In a society in which women are too often the victims of physical and sexual abuse, and have to work within a legal system that frequently fails them, changing this patriarchal structure is both a violent and seemingly impossible task.