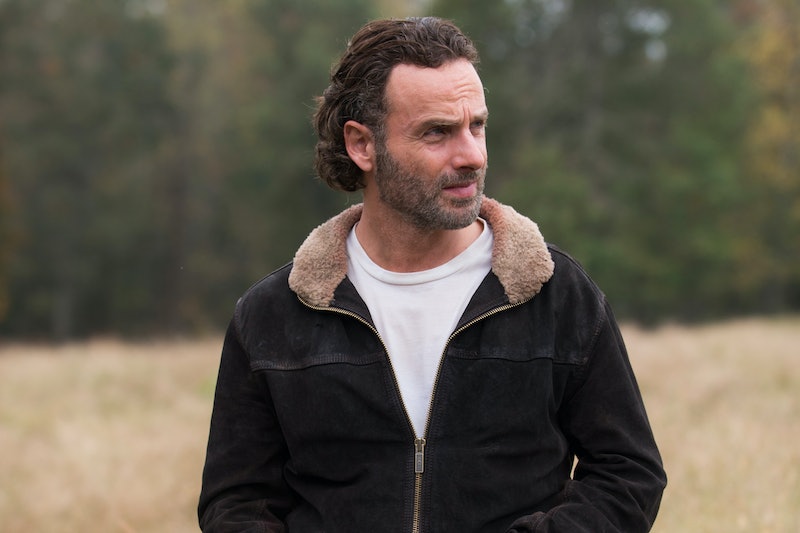 Pumpkin spice lattes and perfect weather aren't the only good things that come in October. Even though the finale hasn’t even happened yet, Walking Dead fans are already anticipating the next season. Although it hasn’t been officially announced, I can say with almost total certainty that The Walking Dead Season 7 will premiere in October, just like it has for the past six seasons. To narrow it down even further, for the last four years, The Walking Dead has premiered the second Sunday in October, and by that logic the exact date will be Oct. 9. And in though six months is a long while to wait, there are more than a few solid ways to pass the time: You could watch Fear The Walking Dead , you could read the comic books ,or if you could just read this article, which anticipates some of the big plot points of Season 7.

I know we’ve all been waiting for and talking about this big Negan moment where he murders one of the group members, but remember that this isn’t the grand finale. The devastating moment is literally just the beginning of the Saviors' reign of terror over the communities. So without spoiling anything, just know that there will be a lot more Savior insanity to come next season.

Obviously the show runners love to switch things up on us, but I’ve put together a list of things that happen in the comic books that seem likely to happen on the TV show based off the way things are going in the show right now.

You’ve been anticipating Negan’s arrival for so long, but now you’re going to wish the show would go back to a time before Negan was around. He’s going to be everywhere, all the time, and if they follow the comics with his plot line, he’s still around for a while when the show returns. You thought the Governor wouldn’t go away? Psh. Negan here for good, friends.

In the wake of Glenn’s death in the comic books, Maggie moves to Hilltop Colony where she becomes a major leader of the community. It seems like the show might make the move happen regardless of what happens to Glenn. The fact that she’s having health issues with the baby and has to be taken to Hilltop Colony means she may need to stay there to get help in on the show.

Carl Takes Matters Into His Own Hands

After the horrifying death scene, the Saviors come to Alexandria and steal a bunch of medical supplies. Carl is having none of that, so he sneaks into the Saviors car and goes back to their home called The Sanctuary. He kills a couple guys before being captured by Negan. However, in the comics, Negan seems to have a soft spot for Carl so they talk before he eventually hands him back over to Rick. It seems likely that they would keep that relationship, if only to show that Negan does have a human side.

One of the things Negan is known for is having multiple "wives." It’s pretty much another way of showing how much power Negan has over the Saviors and it’s different than anything we've seen in the past, so I bet the writers keep it. There's also an important scene in which one of his wives hooks up with someone else, and Negan’s punishment is brutal, to say the least.

The Introduction To Ezekiel And The Kingdom

Jesus was right when he told Rick the world was about to get a lot bigger on the show. Alexandria and the Hilltop team up with a place called The Kingdom. Their leader is Ezekiel and he's got a pet tiger named Shiva, so that's going to be pretty freaking awesome. He's a pretty major character, so I would be surprised if he wasn’t a part of the show.

I warned you to stop reading if you didn’t want spoilers. Spencer Monroe’s death is pretty epic in the comics. I know in the show, the writers love to switch things up, so it may not be Spencer who goes down, but I’m sure how he dies will stay in. I’m not going to ruin that part. I will say it’s pretty gross, though.

An All Out War

I assume that most of next season will be everyone preparing for the epic battle against the Saviors which will probably take place in the Season 7 finale.

It might be a little harder to weather those six months than I thought.

More like this
20 Photos From The 'Stranger Things' Season 4 Premiere To Make You Feel Old
By Alyssa Lapid
'Gentleman Jack’s Cast & Crew Are Keen On Season 3, Too
By Frances Stewart
'Bridgerton' Star Nicola Coughlan Confirms Season 3 Will Focus On Colin & Penelope
By Grace Wehniainen and Alyssa Lapid
Everything To Know About The Possibility Of 'The Essex Serpent' Season 2
By Rachel Mantock
Get Even More From Bustle — Sign Up For The Newsletter