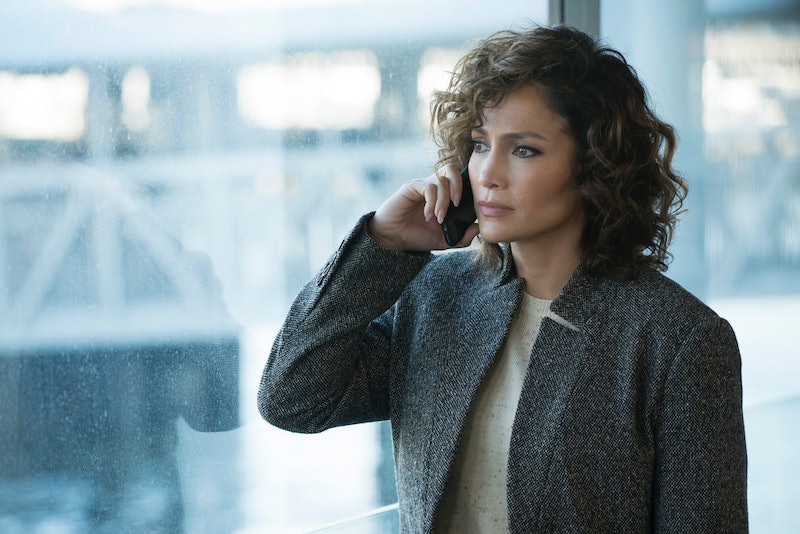 Jennifer Lopez has conquered movies, music, Las Vegas, and now TV — both reality and scripted. While juggling a Vegas concert residency and American Idol judging duties, Lopez returned to acting in a thrilling crime drama. But when will her Shades of Blue return for Season 2? There's no word yet about when the show will return after Thursday night's season finale, but you can rest assured that crime drama will have a second season on NBC. Back in February, Variety reported that NBC renewed Shades of Blue for a second season and speculated that, due to Lopez's busy schedule, Season 2 will also be 13-episodes long.

Shades of Blue follows Lopez as Det. Harlee Santos, a dirty NYPD cop and single mom who becomes an FBI informant. Complications ensue, of course, as Harlee's loyalty is tested and she tries to be a good mother to her daughter, but J. Lo has never been better on-screen. I mean, most of us knew the multi-hyphenate star could definitely kick ass, but I think this show uses all of Lopez's strengths as an actress and an overall awesome person. Luckily, Shades of Blue will have another season to showcase J. Lo at her finest.

Here's why Lopez has never been better in the NBC cop drama.

For Harlee, there's no one right answer and Lopez plays this complex character perfectly as she navigates trying to be a good mom and doing the right thing for the sake of her job.

As an actress, Lopez has always brought a genuine vulnerability to the table, and that's tough to do. She helps us understand Harlee's predicament and why she does the things she does. It's great to watch.

J. Lo isn't the only star power that Shades of Blue has on-screen. The super intense Ray Liotta and Drea de Matteo also star in the drama, giving Lopez some intense actors to play opposite. Talk about raising the acting game.

She Has A History Of Playing Great Cops

Before Shades of Blue, Lopez famously played U.S. Marshal Karen Sisco in Steven Soderbergh's Out of Sight, and she also played a cop in Angel Eyes. She hasn't been typecast as a police officer or woman of authority, but it's clear she can do it if the role calls for it.

Anyone who saw Lopez in the movie Enough knows this, but if you didn't, seeing J. Lo in Shades of Blue shows you a whole new kick-ass side of the actress.

And are we surprised that she rocks in Shades of Blue? J. Lo has been fierce since the '90s — and now she's strutting her stuff on not just one TV show, but two on two different networks.

While American Idol is coming to a close, I'm excited to see Lopez will return to Shades of Blue Season 2.

More like this
Will ‘Bling Empire’ Return For Season 3? Here’s What To Know So Far
By Kadin Burnett
'Heartstopper’s Joe Locke Is Manifesting A Jennifer Coolidge Cameo Next
By Nola Ojomu
Everything To Know About A Million Little Things' Reported Final Season
By Brad Witter
Netflix Just Revealed When 'Never Have I Ever' Seasons 3 Will Premiere
By Gretchen Smail and Alyssa Lapid
Get Even More From Bustle — Sign Up For The Newsletter