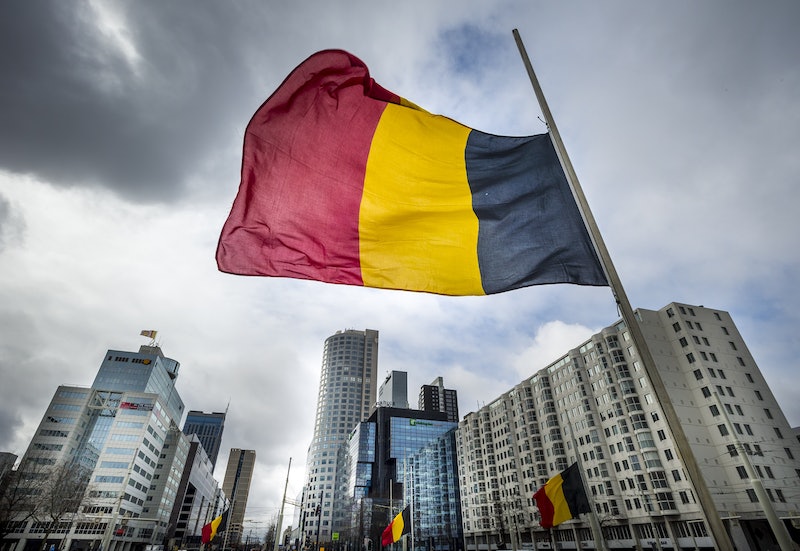 More than a week after terrorist attacks that left more than 30 people dead, life in Brussels has still not returned to normal. The damage from the attacks is so extensive that Brussels' main airport remains closed Wednesday, with no word on when it will be able to reopen. The manhunt also continues for the "man in the hat" — the third attacker at the airport who left just before the bombs exploded.

There were hopes that the airport would reopen with 20 percent capacity on Wednesday, but a tweet from the airport confirmed that it will not be able to do so, since the government must give the green light. Brussels Airport CEO Arnaud Feist said the damage was extensive, and that returning to full operations will take time. "Although the structure of the building is intact, it will all have to be rebuilt, from the air conditioning to the check-in desks. And that will take months," he told Belgian media.

The best-case scenario in the short term would only partially restore operations, with passenger capacity down from 5,000 per hour to as few as 800. The blasts not only shattered all of the windows in the departure hall, but also broke the window frames. Much of the ceiling came down as well. Photos of the destruction taken a day after the attacks were published Tuesday in a Belgian newspaper. They show twisted metal beams, broken wall panels, and wires hanging from above, covering check-in desks and waiting areas.

On Monday, about 800 of the airport's employees participated in a test of provisional check-in procedures in a new, temporary area, which is described by Bloomberg News as an "unused room on a level normally frequented mainly by bus users." Enhanced security measures will be introduced, and passengers will have to climb three sets of stairs with their carry-ons to reach the main security screening.

Arriving passengers will also be inconvenienced when the airport resumes service. Airport spokesperson Nathalie Van Impe told Bloomberg that there is concern about the integrity of the arrivals hall as well. It's directly below the departures level, where the bombs were detonated. Travelers will be taken by bus to collect checked luggage from an airport hanger.

Meanwhile, around Belgium — as well as in France and the Netherlands — police continue rounding up suspects connected to the attacks. The top priority is finding the third airport attacker, who was seen in a security video wearing a hat and white coat alongside the two suicide bombers. He delivered a third bomb, but left the scene when it didn't detonate.

Belgian officials have released Faycal Cheffou, a Belgian man who considers himself a freelance journalist but has been accused of recruiting for extremest groups. He was thought to have been the third airport attacker, but the evidence wasn't conclusive enough to hold him (although he remains a suspect). He was ID'ed by the taxi driver who took the attackers to the airport, but phone records allegedly prove he was elsewhere at the time. DNA may also not be a match.

The focus is now on two right-handed gloves, suspected to be the twins to the gloves the attackers wore on just their left hands to hide trigger devices. They were found on a bus that left the airport shortly after the attacks, and were stained with explosive material. On Monday, authorities released video from the CCTV cameras and asked for the public's help in identifying the third man.

Brussels has been criticized for missing warning signs. In addition to warnings from Turkey about one of the El Bakraoui brothers last year, the Netherlands said yesterday that the FBI warned the country about both Ibrahim and Khalid just five days before the Brussels attacks. This revelation underscores the lack of coordination among European countries in preventing terror attacks. The Dutch justice minister claims that Belgium police were told, which Brussels denies.

The death toll in the attacks was lowered to 32 on Tuesday. Belgian Health Minister Maggie de Block tweeted the new figure. The government said the previous figure of 35 was due to confusion between two lists, one of those who died on the scene and another of those who died at the hospital. The victims have all been identified, with families mourning as far as China and Peru — a testament to Brussels' diversity.