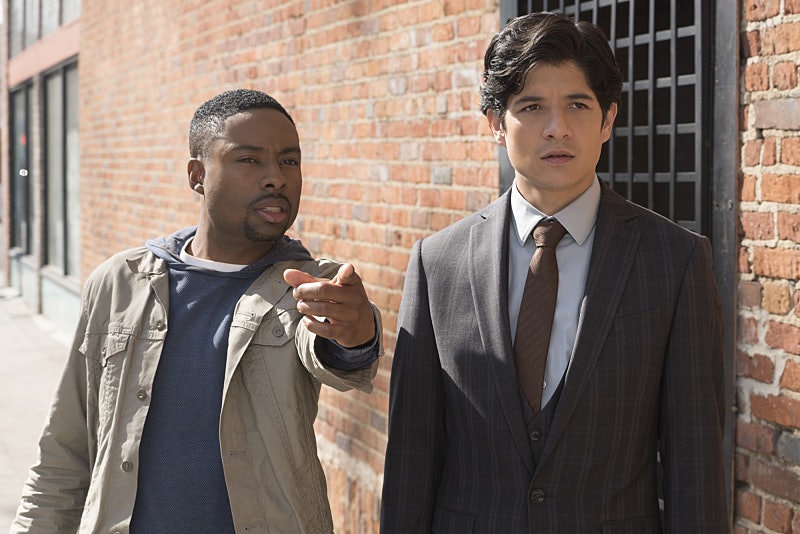 One of the greatest movie buddy cop pairings on the big screen is definitely Jackie Chan and Chris Tucker in Rush Hour and the subsequent sequels. But sadly, as the concept comes to TV, both original actors are absent (so far) from the new CBS series, which premieres Thursday, March 31. It's just one of the ways how the Rush Hour TV series is different from the movie. In place of Tucker and Chan, Justin Hires steps into the role of the wisecracking LAPD Det. Carter and Justin Foo plays rule-abiding Hong Kong policeman Det. Lee. Hilarity is sure to ensue as these two embark on adventures, just as it did in the movie.

And why not? The Rush Hour formula made the first film a huge hit in 1998, which spawned sequels in 2001 and 2006. Now, this unlikely pairing of policemen is coming to TV in what CBS is calling a "reimagining of the hit feature film franchise" in which the two detectives will "knock heads when they are forced to partner together" in Los Angeles. Sounds familiar, doesn't it? But while the general concept is the same as the first film's — two cops who have different backgrounds and with completely opposite personalities clash, but also manage to save the day — the Rush Hour TV series will have many differences from the movies to reflect that, well, it's 2016 now.

These are the biggest differences that fans will see when the show hits CBS.

Hires is a stand-up comedian, while Foo started out as a stuntman and has "mad martial arts skills," according to Variety's review of the series.

Carter's Captain Is A Woman

This time around, Carter's boss is Captain Lindsay Cole (played by Wendie Malick) — and she is a woman. Because plenty of females have risen in the ranks of the police and it's great to see that reflected here.

The Reason Lee Comes To The United States

In the first Rush Hour movie, Lee comes to the U.S. because his former boss' daughter gets kidnapped as part of some nasty business with a Hong Kong crime lord. In the TV series, it's a bit simpler: Lee's sister, also a cop, gets killed and Lee arrives in Los Angeles looking to avenge her death and investigate the Chinese crime ring responsible.

Carter Has A Cousin

In the TV series, there are some new characters brought into the fold, including Gerald (played by Page Kennedy), who CBS describes as "a low-level offender who runs with a tough crowd" and acts as an informant.

In the Rush Hour movies, fans only got to go on three journeys with Lee and Carter. But thanks to the series, there could be seasons upon seasons of adventures... if the show does well.

More like this
'Doctor Who’s New Star Is Already Huge On TikTok
By Maxine Harrison
What’s New On Netflix: A Victoria Justice Rom-Com & The Return Of David Letterman
By Arya Roshanian
Lisa Marie Presley Reviewed Baz Luhrmann’s ‘Elvis’ Movie On Twitter
By Grace Wehniainen
What Is Mandy Moore’s Net Worth?
By Hugh McIntyre
Get Even More From Bustle — Sign Up For The Newsletter