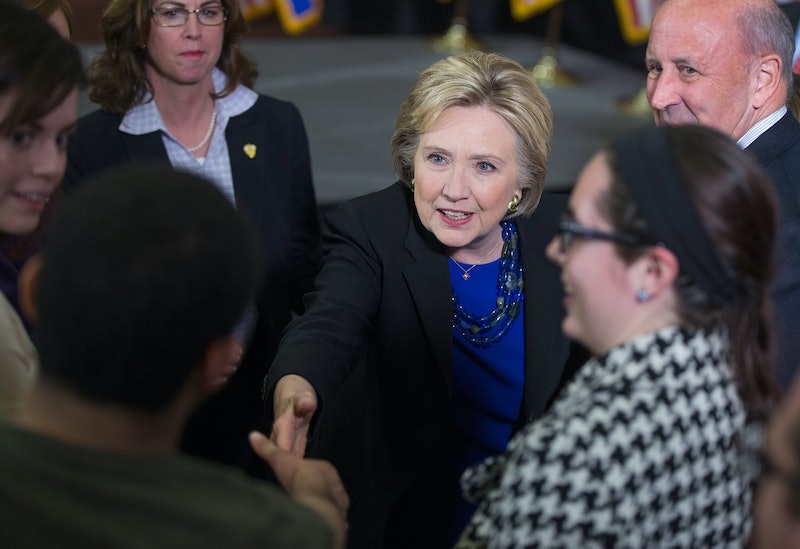 The race between Hillary Clinton and Bernie Sanders for the Democratic presidential nomination remains very tight. As the primaries march on, the tone of the rhetoric from both candidates and their camps has gotten increasingly aggressive. On Sanders' side, some voters are even saying "Bernie Or Bust" when it comes to casting their votes in the fall. As Clinton maintains her delegate lead, there appears to be a growing tide of Sanders supporters claiming that they will not vote for Clinton in the general election if she is the Democratic nominee. I am a transgender woman, and for those of us directly in the crosshairs of the increasingly radical right wing of U.S. politics, that's a very worrying scenario.

The gulf between those who are "feeling the Bern" and the more pragmatic and centrist Clinton supporters appears to be widening daily. A recent piece in Salon advocated that voters write in for Sanders should Clinton secure the nomination, claiming that a Clinton presidency would somehow "unite" the GOP and Democrats on war. There is a Change.org petition, directed at the Democratic National Committee, of folks pledging that they will not support Clinton in a general election. It has over 14,000 signatures. A recent Wall Street Journal poll found that one-third of Sanders supporters in Vermont wouldn't support Clinton should he lose the race. There's even a hashtag: #BernieOrBust

Those trying to make a case against supporting Clinton generally cite her "big business" connections, her position as a Washington "insider," and her somewhat more aggressive foreign policy as their rationale. There also seems to be some animosity over a perceived media slant for Clinton. Oh, and of course, conspiracy theories abound. The more concerning rationale coming from Berner groups is that a Clinton presidency would somehow be just as bad as a Trump presidency, or that Trump winning would trigger some kind of "revolution."

Let me state for the record that I'm not currently committed to either candidate. I like many of Sanders' progressive plans, and I respect Clinton's willingness to reexamine her views and admit her past mistakes. There's also plenty that I disagree with her on, particularly in matters of foreign policy and some fiscal points. However, I will also respect the result of the primary process, and I will support whichever candidate goes on to the general election. It's very disheartening to see the selfish, privileged, hardline Bernie or Bust stances.

The point is that if you're happy to let a GOP candidate win the presidency because Sanders isn't the Democratic candidate, you're not nearly as progressive as you think you are, and you probably should examine your own social privilege. Progressive values are about equality and security for those who are struggling the most. Marginalized people in the U.S. simply cannot afford to live under a radical Republican president for next four to eight years. The LGBTQ community, people of color, undocumented workers, Muslims, people in poverty, and women would all suffer greatly under the administration of any of the GOP hopefuls. Bernie or Bust means we're being thrown under the bus in the name of the white-male-dominated Sanders "revolution," and we're expected to be thankful for it.

If you're happy to let a GOP candidate win the presidency because Sanders isn't the Democratic candidate, you're not nearly as progressive as you think you are, and you probably should examine your own social privilege.

To claim that Clinton is somehow "just as bad" as Trump or Ted Cruz is the height of political hyperbole. Trump has advocated building a $40 billion wall across the Mexican border, confining people to internment camps, keeping all Muslims in the U.S. under surveillance, and deporting all non-citizen Muslims. All of the Republican candidates have pushed back on marriage equality, advocated for "religious freedom" laws to allow discrimination against LGBTQ people, and made incredibly bigoted remarks against the LGBTQ community. In fact, the Republican Party has an official plank encouraging bills that trample the rights of transgender people. All the GOP candidates have pledged to further erode reproductive freedoms, and to shred access to healthcare provided by the Affordable Care Act. If you see Hillary Clinton as "just as bad," then you're failing entirely to see the situation from the eyes of people who have the most to lose.

Some have advocated that Democrats would be better served in focusing their energy on retaking Congress by pushing incumbent Republicans out of their seats in House and Senate elections that will also be occurring in November. The notion is that even with Trump or Cruz in the White House, they'll be hamstrung by Congress. Unfortunately, the GOP's significant efforts at gerrymandering over the last few years have made it extraordinarily difficult for the Democrats to seriously threaten the Republican control of the House. There's a moderately higher chance of Senate changing hands, but that's still far from certain in a post-Citizens-United era. Even if the Dems did have those majorities, President Obama has done an excellent job of showing exactly how much the chief executive can accomplish with a recalcitrant, obstructionist legislature. It's hard to imagine a world where a Republican president wouldn't follow that example and find creative ways to implement their regressive agenda.

Perhaps the most terrifying outcome of a GOP win in 2016 is the potential major shift in the balance of the Supreme Court. With Justices Ruth Bader Ginsberg, Anthony Kennedy, and Stephen Breyer all over the age of 75, it seems very likely that the next president will be appointing several new members to the Court. If the Republicans uphold their pledge to keep the late Antonin Scalia's seat open, that's an opportunity to change nearly half of the voices in the nation's highest court, and the effects of those appointments will be felt for decades to come. There are also the dozens of lifetime appointments of federal judges that the president will inevitably be making. With the recent intransigence of Congress, the courts have become one of the only ways that the rights of marginalized people have been carved out. A shift to the more conservative end could endanger abortion access, marriage equality and other LGBTQ rights, the strength of unions, and criminal justice reform for decades. And all indications are that that's exactly what the GOP is planning.

Perhaps one of the harder to quantify — but still just as important — factors to consider is the degree to which the president has the opportunity to set the tone for the national discourse. Already, we've seen the way Trump's xenophobic, racist tone has empowered bigots to be more public, more aggressive, and more violent in their racist views. The homophobia and transphobia of people like Ted Cruz has fueled the backlash against gay and trans rights in the post-marriage-equality era. The eight years of the Bush administration proved exactly how powerful the bully pulpit can be in influencing the views of the American people to dangerous extremes of nationalism. In our current political climate, that power could (and I believe likely would) be used by the Republicans to whip up fervor against marginalized people of all sorts for the benefit of their war chest and power bases. Those of us most vulnerable to that kind of rhetoric can ill afford four or eight years of hate-mongering and fear from a Trump or a Cruz in the Oval Office.

What this seems to come down to is that Bernie or Bust people have become so enamored of their self-congratulatory "revolution" that they've entirely lost sight of the bigger picture. They care more for the movement than for the people. In essence, they expect marginalized people to be the sacrificial lambs for their cause. They claim it's about looking to the future, but looking 10 years down the line is a luxury that trans people like myself, Muslims, undocumented immigrants, disabled people, and those living in poverty simply do not have. Many of us simply would not survive Trump or Cruz winning a general election. The Bernie or Bust stance is the ideological equivalent of building your futures on our graves.

I'm not asking you to show Clinton the same exuberant support you've shown Sanders. I'm not even really asking you to be happy about voting for her in November, should that be the way things fall. I'm just asking you to look past your signs, your ideals, your clever slogans and your movement, and realize that you're standing on our necks.