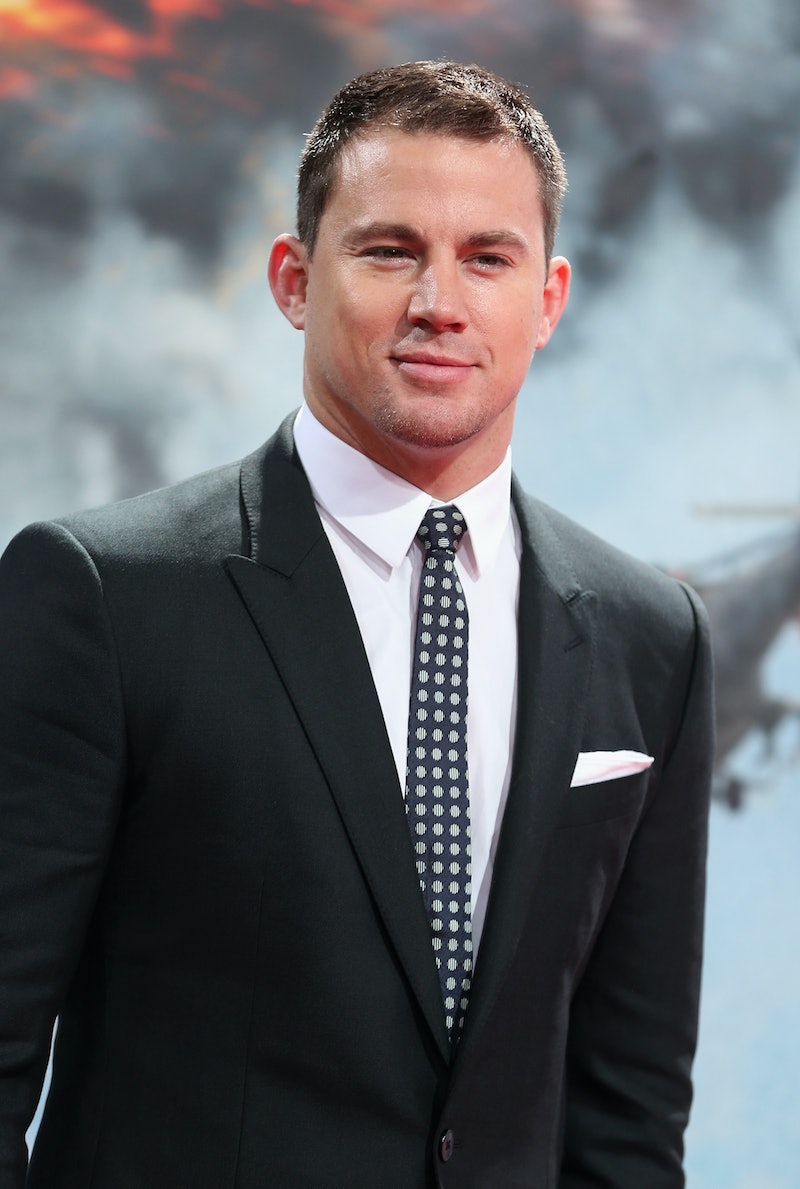 Channing Tatum is finally putting pen to paper regarding one of the most important film sequels in film history, Magic Mike 2 — but really, if not for the campy male stripper costumes and questionable dance sequences alone. On Sunday, Channing Tatum confirmed that Magic Mike 2 was a go, since up until then, the sequel was rumored to just be in development. Tatum Instagrammed a photo of himself sitting at a desk chewing pensively on a pen and holding a legal pad. The caption says, "What better way to start writing #MagicMike2 than with my old friend Dallas? #runatribe."

And indeed, there is a large marble bust of Dallas on Tatum's desk. If you don't remember, Dallas is Matthew McConaughey's character in the movie, who creepily played the part of a Tampa strip club owner to perfection. At first glance, I thought it was a bust of one of our founding fathers, but what kind of inspiration would that be? And also, is this a clue that McConaughey will return for his role, or at least make a cameo? The Dallas Buyers Club Oscar-nominated actor is on a hot indie drama streak at the moment, so only time will tell if he decides to don his cowboy getup and Uncle Sam hat again.

Tatum is also wearing a jazzy fedora with a feather in it, possibly giving us indication that Magic Mike 2 will be more of an over-the-top cheesefest than the first film. After all, how can you write a movie about male strippers without wearing a feathery thinking cap?

Also, Tatum is totally serious about making this movie an incredible work of art — you can tell by how neatly his desk is arranged for the writing process. Pens are lined up, notepads are assembled, and a snack and a drink is at the ready — let the games begin.

Tatum will be seen next in 22 Jump Street, Jupiter Ascending, The Book of Life, and Foxcatcher.

More like this
What Colonel Tom Parker Was Really Like
By Morgan Leigh Davies
Taylor Swift's “Carolina” Theme For 'Where The Crawdads Sing' Soundtrack Is Here
By Jake Viswanath
What Is Elvis Presley’s Net Worth? How The King Earned & Spent His Fortune
By Grace Wehniainen
'Elvis,' 'Walk The Line' & 10 Other Movies Where The Actors Actually Sing
By Radhika Menon
Get Even More From Bustle — Sign Up For The Newsletter