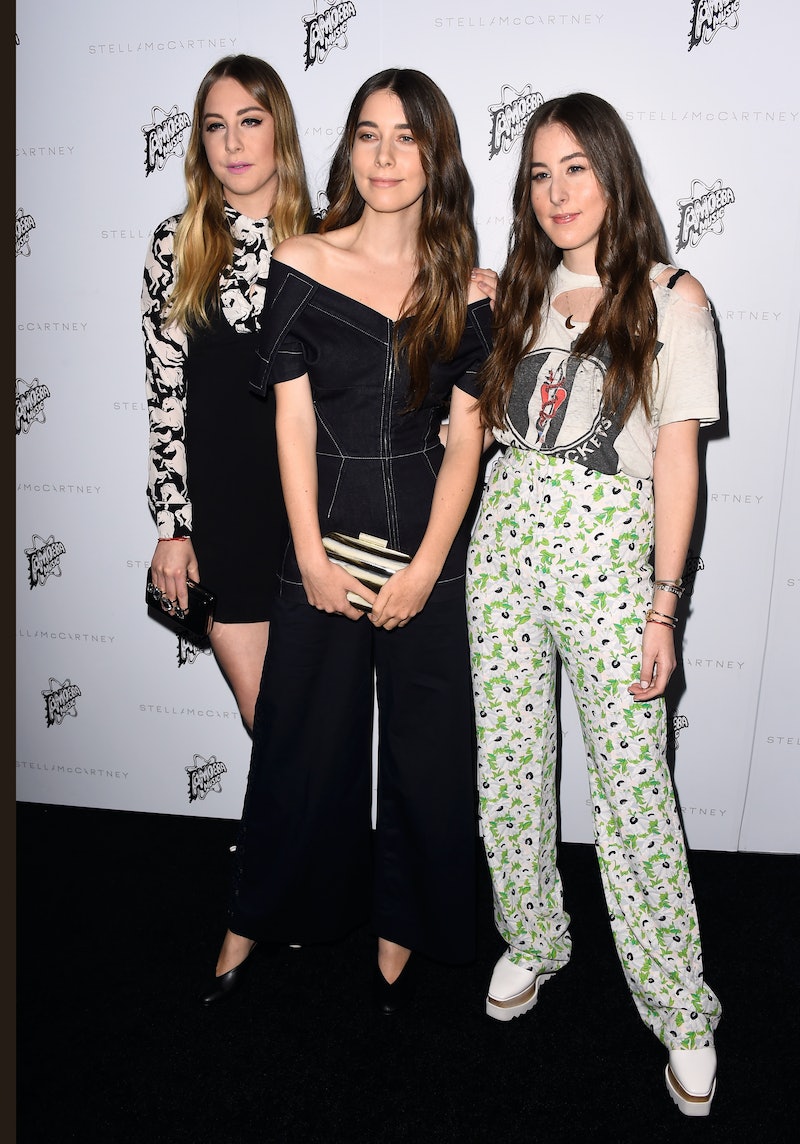 Stop press! The L.A. sister trio who make me want to make jokes like "they put the 'tresses' in songstresses" are planning to release new music this year. That makes it just three short (read: interminable) years since they dropped their unstoppable debut album, Days Are Gone. HAIM announced their music by tweeting a video accompanied by the words we've all been waiting for: “NEW SONGS. NEW SHOW. THIS SUMMER,” and during the video we can hear a voiceover stating “We’ve just been in the studio so long, perfecting and trying to get it right, at this point we just want to go out there and play the songs live.” Amen to that, ladies.

HAIM have already publicized new tour dates for North America, kicking off in May 17 at Santa Ana, and there are a couple of dates in Europe at the tail end of the tour (Gothenberg, Oslo, Copenhagen: the universe has picked you for the musical lottery win). HAIM, you know how to treat us right. If there was ever an excuse for a holiday to Europe for a tenuous seeing-your-favourite-band-perform-on-a-different-continent, this would be it. No word yet on what exactly their new music sounds like, but, given that these women are basically summer on stereo, I'm going to guess blissed-out grooves. But, before we surge forth to HAIM's musical future, let's take a second to take stock of their past. Namely: what pre-HAIM bands have been major influences on their sound?

According to an interview the band did with Marie Claire, HAIM hates being compared to musical ballers like everyone's favourite '70s band Fleetwood Mac because "Fleetwood Mac is one of the greatest bands out there! Let's start a little smaller, you know?" Top tip: stop doing incredibly dreamy, catchy covers of Fleetwood Mac's singles and the comparisons might die out one day.

In the same article, HAIM argues they don't want to be compared to Beyoncé either. My response to you, ladies, is exactly the same as above. But this is a damn great cover: and no wonder. HAIM have always been pop music addicts who take melody very, very seriously.

While HAIM's sound is nowhere near as melancholy as Baez's, Baez's light, breathy singing voice isn't 500 miles away from the vocal stylings of Danielle Haim.

After graduating high school, Danielle Haim was spotted by Rilo Kiley frontwoman Jenny Lewis during a jam session at Laurel Canyon and Lewis asked her to join her on tour.

After Danielle Haim joined Jenny Lewis's touring band, she was spotted by The Strokes' Julian Casablancas who then recruited her to play guitar and percussion on his solo tour. She rehearsed with Casablancas's band every day for two months which she described as an "eye-opening experience." That same aesthetic of retro-lofi rock and pop hooks seems to inform most of HAIM's music.

If you ever felt like Florence would probably enjoy some HAIM jams, you'd be right. Long before HAIM came to any record label exec's attention, Florence had heard their music and invited them to open for her in London. There's a definite Florence influence throughout Days Are Gone.

In the memorably titled VICE interview "I Play in a Band With My Two Pretty Sisters," Danielle Haim claims Usher as an influence. Not totally sure I can hear this influence, but cool, whatever works.

And in the same interview, Danielle also names Drake as an influence.

Este Haim is the most academically musical of the trio, having studied Brazilian music and percussion at UCLA. During this time, she was also in the Bulgarian Women's Choir for a bit. I can definitely hear this beautiful harmonizing having an influence on the band's sound.

While some of the cooler HAIM fans may be a bit skeeved out by Danielle and Este once forming part of Sisterhood of the Travelling Pants' soundtrack band the Valli Girls, they don't not sound like HAIM, y'know? They're like HAIM plus extra sugar, pop, production and with shorter skirts. But the basic pop-rock structure's still there.

HAIM first started playing music together from as young as 4 years old because their parents made them play in a family band, Rockinhaim, which focused on classic rock covers: the Beatles, Billy Joel and Van Morrison. Alana Haim told Complex magazine:

"Our parents started RockinHaim because they wanted a family activity that we could do together instead of camping. I didn’t really have a choice. Looking back, I’m super pumped that we did it. I honestly thought that every family had a band, that after dinner everyone played music with their parents."

With influences like these, I don't know how their next album can't be another Justin Timberlake chart rival of a pop beast. Roll on, Summer 2016.

More like this
Stormi Just Walked A Red Carpet With Mommy Kylie Jenner & Daddy Travis Scott
By Hugh McIntyre
Is Megan Fox Pregnant? MGK Gave A Shout-Out To Their “Unborn Child” Onstage
By Hugh McIntyre
The 1st Photo Of Priyanka & Nick's' Baby Comes After 100 Days In The Hospital
By Jake Viswanath and Hugh McIntyre
Doja Cat Needed Tonsil Surgery & Now She Can't Eat Taco Bell's Mexican Pizza
By Jake Viswanath
Get Even More From Bustle — Sign Up For The Newsletter