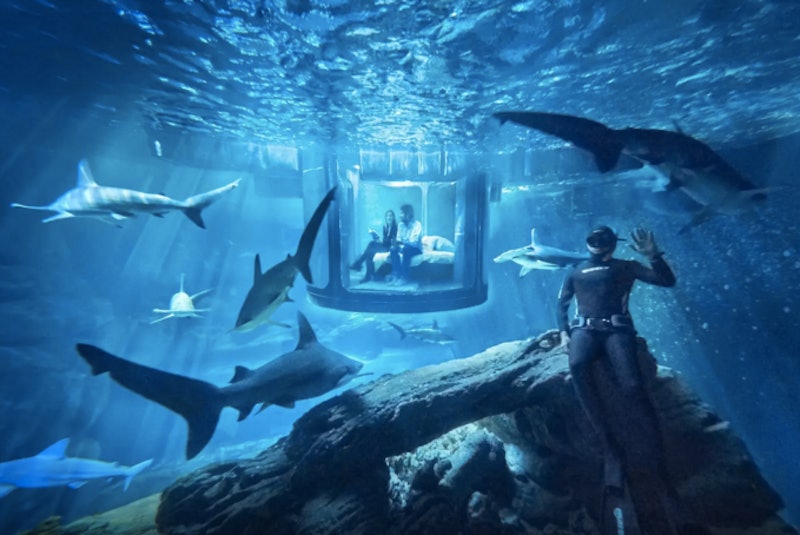 If you've ever dreamed of sleeping with sharks, then this shark tank Airbnb contest could make your dreams come true. Obviously, that's one weird dream, but hey, I'm not here to judge. The competition won't have you sleeping in shark-infested waters, thankfully, but is for a beautiful stay in a glass room where you'll be able to watch an aquarium of sharks swimming around you as you doze. The daring Airbnb in question is in Paris (not a place you'd likely associate with sharks, but hey, who doesn't want to go to Paris?), and the winners of the Airbnb Night At The Shark Aquarium promotion will get to stay in the incredible digs for free over April 11, 12 and 13. If that's not enough to entice you to enter, the Aquarium de Paris is right in front of the Eiffel Tower, so there are all kinds of views to take in.

The Aquarium de Paris has a long history too, being the first aquarium ever to exist. Add that to the growing list of reasons to enter. Airbnb's listing tells us the winners will be submerged in a glass tank with 360 degree views of the aquatic life around them: "Ever gaze into an aquarium and wonder what it’s like to live under water? Imagine yourself submerged in three million liters, in an aquarium ten meters deep, alongside 35 of the most majestic creatures on Earth: sharks! Experience what it’s like, even for a night, to live amongst these feared creatures."

Let's just hope none of the sharks have Jaws-style super strength.

Seriously though, what kind of crappy diving cage gets broken so easily by a shark ramming it? Seems like a giant design flaw in the aquatic equipment. In Paris, thankfully, you'll be much safer from the toothy marine predators. Maybe just don't tap on the glass (you're not supposed to tap on your gold fish tank, so probably don't tap on the shark tank either).

To enter the competition, you'll need to fill out a little comment card telling Airbnb about yourself and why you want to sleep with the sharks. The prize doesn't include flights to Paris, but includes shampoo, towels, and breakfast, as well as your shark-infested accommodations.

The Airbnb also says, “Our home is your home. So get comfortable, as your host will dive into the tank and formally introduce you to a few of your neighbors for the evening. You’ll enjoy an intimate meal inside our aquarium, with gorgeous tank-side views of your favorite neighbors.” The only catch? No pets allowed.

Sorry guys. While you might not be allowed to bring fluffy, the listing doesn't say anything about not bringing your left shark costume, or doing your best left shark dance while you're in there. Go forth.