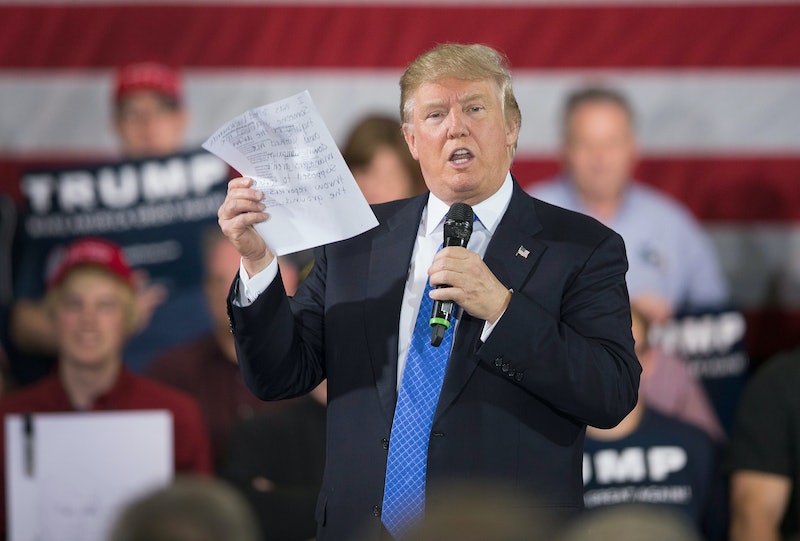 On Tuesday, the other shoe dropped on a story that had been simmering for some time, and in a very dramatic fashion. Donald Trump's campaign manager, Corey Lewandowski, was charged with battery over a much-disputed encounter with reporter Michelle Fields earlier this month. "Much-disputed" by Lewandowski, the campaign, and its supporters, that is ― the police released a video which seems to show Lewandowski grabbing Fields by the arm. But here's an odd notion: Could the Corey Lewandowski charge actually benefit Trump in the end?

It's a possibility that countless press critics, progressives, and anti-Trump conservatives would likely find infuriating, or at least irritating. For their part, Lewandowski and the campaign have been unabashed in claiming his innocence, saying in a Twitter statement on Tuesday that he was "absolutely innocent of this charge."

But the criticism from both the left and the anti-Trump right has been every bit as furious and condemning as the Trump campaign's response has been unapologetic. Despite Lewandowski initially claiming (on Twitter, naturally) that he'd never touched Fields, had in fact never met her, and that he considered her "delusional," there's now video of him pretty plainly grabbing her arm. Fields, for her part, tweeted out a picture of bruises on her arm following the alleged incident.

It's the sort of story that you'd naturally assume would be a big loser for a politician, especially considering that the Trump campaign has changed its line of attack on Fields a number of times, while her story has remained fundamentally consistent (although Trump disagrees, and defends Lewandowski). But there is one way that this could potentially evolve into a plus for him, or at the very least a wash ― if Lewandowski isn't actually prosecuted by the state of Florida.

What's that, you say? It's true: As Wesley Lowery detailed for The Washington Post Wednesday, there's no ironclad guarantee just yet that Lewandowski will actually be prosecuted. That's still a matter for Florida's state attorney's office to decide. Here's how State Attorney Dave Aronberg's spokesperson described it to Lowery on Tuesday:

Law enforcement charges on a probable cause standard. The State has to proceed on a legally higher standard of proof beyond a reasonable doubt as well to whether there is a reasonable likelihood of a conviction. Both legal and ethical standards for the State.

So what if the state attorney decides against actually prosecuting? If that's the kind of situation that comes out of this ― blaring headlines about Lewandowsky being charged with battery of a journalist, followed by aggressive counter-messaging from the Trump campaign (which is already well underway), followed by the state not even deciding to prosecute? That would fuel the aggrieved, belligerent mentality of anyone already supporting Trump, and would play into dangerous cultural impulses about the absolute authority of the justice system.

Could that sort of thing possibly sway a few undecided voters? It's probably a remote risk, because Trump's probably already cornered the vote of anyone who reflexively grinds their teeth whenever a woman takes a high-profile man to court. I think they're called "misogynists," right? But it's worth considering that there are still more than a few ways this could go down, and the Trump campaign is nothing if not willing to go scorched-earth, especially when it can also send a message to its critics.

There's a flip side to this, however. The obvious vulnerability for Team Trump is that if Lewandowski is prosecuted, it's going to be a detriment, whether or not he is convicted. That's because Lewandowski is supposed to be spending his time managing a campaign, not fending off criminal charges, and people have already been questioning the strength of Trump's political organization versus the more built-up infrastructure of the Ted Cruz campaign.

In short, if Lewandowski actually has to appear in court, that could take months to resolve, and it would surely hurt the campaign. All you can really do at this point is wait and see, of course, but this story looks like it could be with us for a while.