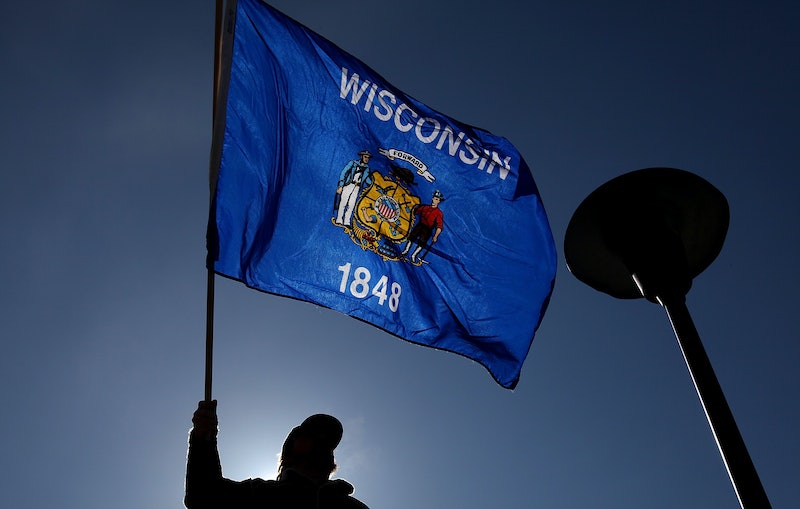 On Tuesday, it will finally be Wisconsin's turn to vote in the 2016 primaries. The Badger State's Republicans and Democrats will decide which candidates they want to see duke it out for the chance to move into the White House next year. Every state conducts its primaries differently — from delegate allocation to voting times — and it's important to know what time Wisconsin's primary results will be in if you want to follow who wins over the state.

Throughout Wisconsin, polling stations will be open from 7 a.m. to 8 p.m. CT (8 a.m. to 9 p.m. ET). If there's clear winner as soon as votes begin to be counted, the results could be in soon after 9 p.m. ET. News organizations thrive on declaring a winner as soon as possible, which is useful for voters dying to know who was victorious. However, if it's a close race for either party, America won't know who wins the state until much later in the night. So your best bet is to check in right after the polls close, and then a couple hours later if the results haven't rolled in yet. For everyone's sake, let's hope it isn't an all-night affair.

Wisconsin is expected to have record high turnout on Tuesday, with the state's elections board predicting that 40 percent of those eligible to cast a ballot will show up to the polls. This is great for democracy, but it also means that counting all the votes will take longer than usual. Presidential primaries in the Badger State have drawn between 22 and 38 percent of voters in the state since 1984, and a jump in participation would drastically increase the number of ballots cast.

The latest Marquette Law School poll showed Bernie Sanders ahead of Hillary Clinton in Wisconsin by 4 percent. Both candidates have ramped up campaigning there in recent days. The GOP leadership in the state has rallied against Donald Trump, and former presidential candidate Gov. Scott Walker officially endorsed Ted Cruz last week. He told Wisconsin radio host Charlie Sykes: "Ted Cruz is a principled constitutional conservative who understands that power belongs to the states — and to the people — and not bureaucrats in Washington." Sykes himself was critical of Trump during a Monday interview, telling the billionaire that he sounds more like a "12-year-old bully on the playground" than a presidential candidate.

The nation should know which two candidates will prevail in America's Dairyland before Wednesday, determining who will get a major boost from the Midwestern delegates.