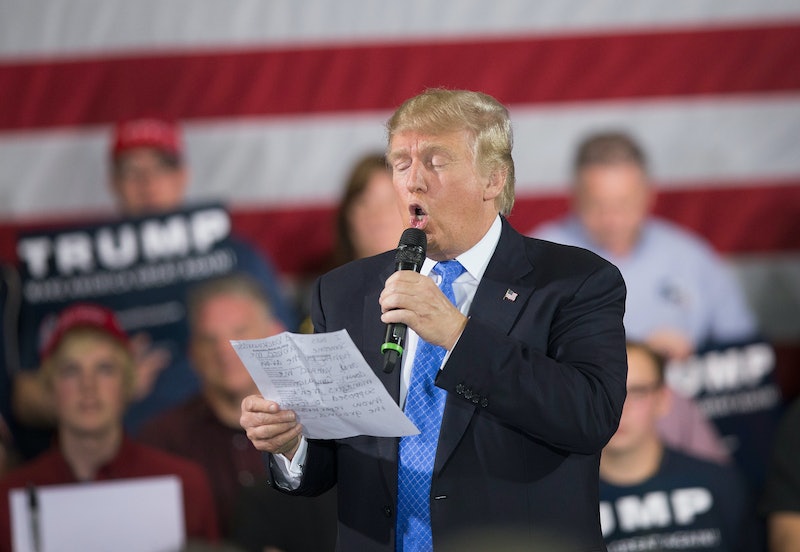 It's often the case during election season, but it's even more obvious during this cycle in particular: There's a political war being waged on reproductive rights in America. And the stakes could barely be higher, with a Supreme Court vacancy that the GOP may try to keep unfilled clear through Election Day. It's going to matter a lot who takes the top job, in other words, especially if we horrifyingly found ourselves with a President Trump. After all, Trump wants to punish women who have abortions — or so he told MSNBC's Chris Matthews on Wednesday.

Update: Shortly afterward, Trump released a statement saying that abortion doctors should be held responsible for the procedure, rather than the women involved.

According to NBC News' Ali Vitali, the comment came during an exclusive interview with the Republican frontrunner that will be airing on MSNBC at 8:00 p.m. ET Wednesday night. With the primary race still at a fever pitch, you should probably consider watching it. While the precise context and content of the interview won't be crystal clear until it airs, Matthews reportedly asked Trump about his position on abortion ― specifically, on whether women should be punished if they were to violate an abortion ban. To this, the Republican frontrunner replied, "there has to be some form of punishment, yeah," but that he "had not determined what the punishment would be."

Matthews was right to ask about this, because it's one of the most consequential and unavoidable outcomes of any of the Republican candidates' stated oppositions to abortion. What do you do when somebody has one anyway? It's an undeniable fact that women always have and always will choose to terminate pregnancies. The only real question is whether you want to provide a safe and legally protected means for them to do so, or to consign them to the kinds of potentially lethal horrors that countless women resort to when it's against the law.

What really comes through in the clip embedded above is the effort Matthews had to expend to extract the answer from Trump, who for all his impolitic statements clearly didn't intend to offer up that particular piece of information. It only came out after Matthews posed the question to Trump over and over again, and after he shot down Trump's attempt to deflect the question back at Matthews by way of his Catholic faith. Only when he was pinned down did Trump finally say "the answer is that, there has to be some form of punishment. There has to be some form."

It's not hard to understand why Trump would've hesitated initially, and why this is the sort of thing even politicians opposed to abortion don't like to get into. Though countless American conservatives engage in very rancorous rhetoric and demagoguery about abortion rights, and the GOP has pushed state-level legislation around the country to curtail women's access, the notion of holding women criminally responsible for that choice is still politically toxic enough that not just anyone is willing to say it out loud. It is an intellectually consistent position, if nothing else ― if you actually, earnestly believe that abortion is akin to murder, then it'd be kind of strange to oppose criminal penalties for those who go through with it.

But it's still not such a popular topic of conversation. In fairness, some will engage it. Back in 2014, a writer for the conservative National Review tweeted that women who have abortions should be eligible for the death penalty ― specifically, execution by hanging. But by and large, you're not going to hear this sort of thing freely offered, especially not from someone trying to win a general election.

After news of Trump's comments broke, his campaign released a statement saying that he was talking about punishment for the doctors who perform abortions, not the women who receive them. This, for the record, was not what he actually said to Matthews. After Trump endorsed punishment for abortion, Matthews clarified "for the woman?" and he answered "yes."

In short, it's obvious that this should bother if you if you're an ardent supporter of reproductive rights. All of the remaining three Republican candidates have already made their opposition to abortion very clear, and even the alleged moderate of the bunch, Ohio Gov. John Kasich, has a downright dismal record on the subject. In other words, the general election is going to be yet another battleground in the American struggle for women's rights, no matter who ends up with the nomination. But with Trump positioned as the frontrunner right now, this news should be kept well in mind.