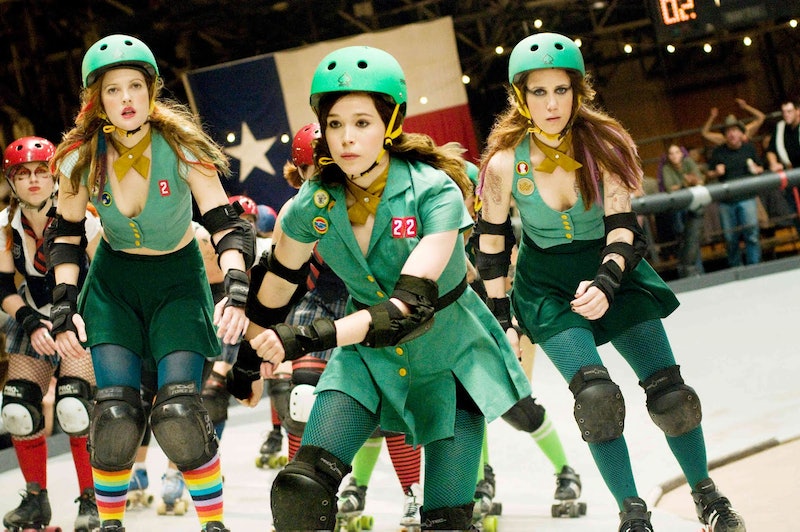 Playing like a girl never looked so good. Female-driven sports movies give a sense of what it's like to be a baller, in a very literal sense of the word. These movies highlight what it's like to be a woman in sports, and as we already know, it's not always easy. Female athletes often have to work harder just to get noticed — that is, for their athletic ability since female athletes are too often judged by their looks — and, ultimately, get paid less than their male counterparts. Heck, Serena Williams still has to defend herself against those who say she's not as good as the men, and she's won basically every tennis award you can get.

But sports movies starring women give us a chance to tackle the issues female athletes face every day head on, sexism being the biggest problem of all. The 18 films below cover a range of sports from surfing to baseball to football to ballet (which is way more cutthroat than you may think), but they all get at it from a female perspective. A view that is often lost in the world of sports. 2000 was a pretty great year for female sports movies, and the follow films show off the best of the best with awesome ladies at the helm. They're definitely worth checking out.

Directed by Penny Marshall, this baseball movie is the gold standard for female sports movies that made it clear that there's no crying in baseball. It tells the fictional tale of the very real All-American Girls Professional Baseball League, which started during WWII as a way to keep baseball in the public eye while the men were away. After watching this movie, you'll definitely want to get out the glove while listening to Madonna's "This Used To Be My Playground," in honor of those women who showed baseball wasn't just a man's game.

For anyone who thought roller derby was a cutesy sport filled with punny names, Drew Barrymore's directorial debut got at the blood, sweat, and tears that goes into the contact sport. We watch Ellen Page's character, Bliss, find herself as she learns to skate, block, and whip. Yes, she whips it good. It's a coming of age story with roller skates that will make you proud to be number two.

Monica Wright is trying to make it into the NBA. It's actually one of the first things we hear her say, fittingly, to her next door neighbor Quincy McCall, who also plans to play professional ball when he grows up. We see Monica struggle to achieve her dream, mostly because of her bad attitude but also because of the lack of opportunities for upward mobility for female athletes. Sure, it's a love story, but, as the title implies, it's also about the love of the game.

This is a story about a girl and her horse. A very young Elizabeth Taylor stars as a 12-year-old girl named Velvet, who, after winning a horse and training it to compete, decides the jockey they have isn't good enough. She decides to step in, but has to pretend to be a young boy to do so. It's a kid's movie, and it's not the most modern, but it does send a good message about never giving up and never letting anyone tell you that you can't do something because of your gender.

Amanda Bynes will do whatever it takes to play soccer — even pretend to be her brother. It all sounds so silly, but there's something inspiring about how Bynes' character Viola strives to do what she loves despite how many people tell her she can't. Of course, in the end, she proves them all wrong by showing she shouldn't be discriminated against because of her gender. Nothing silly about that.

Whoopi Goldberg wins a contest and becomes the coach of the New York Knicks for a day. Sure, it's a comedy, but Goldberg gets to play the one who knows how to bring this seemingly terrible team back on track by understanding the game better than any of the guys. Since there are currently only two female assistant coaches in the NBA, this is a pretty inspiring film, even if it's just supposed to be a joke.

This surfing movie starring Kate Bosworth gets at how scary the sport can be. The shots of waves crashing down on people and Bosworth's Ann Marie Chadwick having her head slammed against a rock definitely adds to the fear factor. I's hard not to watch this movie and have even more respect for surfers. And for women who clean hotel rooms.

Never underestimate Goldie Hawn. That's the lesson you learn from this football movie, where she plays a coach who takes over an inner-city high school football team. No one thinks she's tough enough to whip them into shape, but she's been waiting for this her whole life. As the daughter of a football coach, winning is in her blood.

Spirit fingers or not, cheerleading is a sport, and don't you ever forget it. This movie pokes fun at cheerleading stereotypes, but it definitely doesn't kid around when it comes to the athleticism that goes into the routines.

Focusing on the U.S. women's track team after they're told America isn't participating in the 1980 Olympics, the movie gives an insider's look at the world of women's sports and the training that goes into being the best. It also looks at the relationships between the female athletes and their coaches and teammates, who they often have to compete against. This becomes harder when the movie's star, a young bisexual woman, falls in love with one of the other runners.

This movie combines soccer and religion and how they intersect for one Indian woman. Jess Bhamra wants to play soccer, but her more traditional Sikh family would like to see her do pretty much anything else. The movie is about soccer, yes, but it's also about growing up and finding your own way, with or without your mom and dad's permission.

This film, starring Katherine Hepburn as a high-ranking golfer and tennis player, is definitely worth mentioning. Sure, the premise is that Hepburn is a star athlete except for when her fiancé is around, and ultimately she ends up with Spencer Tracy, her shady promoter, in the end, but the film is all about her trying to win the championship. It's about her reaching her goal. That's a message we can get behind.

The American Ballet Academy shows how tough it is to be a prima ballerina by looking at three different women who are trying to nab the title. Jody is the newbie with poor turnout, but a lot of heart. Eva is talented, but can't move ahead because of her attitude. And Maureen is killing herself to be the ballerina her mom always wanted her to be. In the end, you get a sense of the pressure that goes into the art of ballet.

Michelle Rodriguez is a girl who loves to fight, but, unfortunately, she's doing most of it out of the ring. After her brother starts taking boxing lessons, she finds she has a knack for it and starts sparring competitively. Like many movies about women in sports, she has to overcome the stigma of being a woman, specifically when she's put up against male fighters. But, in the end, Rodriguez more than a fighter; she's a survivor.

Kate Moseley is a tough, spoiled brat of an ice skater who was at the top of her game until she loses her partner. After being paired up with former hockey player Doug Dorsey, we watch that icy exterior melt and realize she's got a sensitive side underneath she's never been allowed to reveal. Soon, this natural born athlete is learning to trust again, not just on the ice, but off too. She also taught us a very important lesson about the toe pick, and why you shouldn't mess with it.

This Iranian film looks at a group of women who just want to go see their favorite soccer team play in the World Cup. Since women are banned from male sporting events, it's a lot harder than it seems. The lengths they go to see the game will make you think twice before complaining about the ticket lines at the next sporting event you go to.

Grab the tissues for this one about a small town female boxer who is trying to make it to the big time with her cranky coach, who doesn't think women are tough. Boy, does she teach him. You'll definitely understand why Hilary Swank won her second Oscar for this one.

What little girl didn't want to be like Icebox? She was tough, with a great arm and no fear when it came to running down her rivals that were bigger than her. This movie also looks at that time in a girl's life where she sometimes feels like she has to choose between sports and boys. The message was clear, though, that someone who doesn't appreciate you for who you are, isn't worth it. And that Becky aka Icebox is not one to mess with.

Whether you're an athlete yourself or think sports are best enjoyed through your eyes and a television, these movies will inspire you to overcome anything that society might throw your way. Especially if you're a woman.

More like this
'Elvis,' 'Walk The Line' & 10 Other Movies Where The Actors Actually Sing
By Radhika Menon
Adele’s All-Female Lineup Includes Kacey Musgraves, Mahalia, & Self Esteem
By Shahed Ezaydi
What’s New On Netflix: 'Stranger Things' & 'Mean Girls'
By Arya Roshanian
What’s New On Netflix: The Return Of 'The Umbrella Academy'
By Arya Roshanian
Get Even More From Bustle — Sign Up For The Newsletter