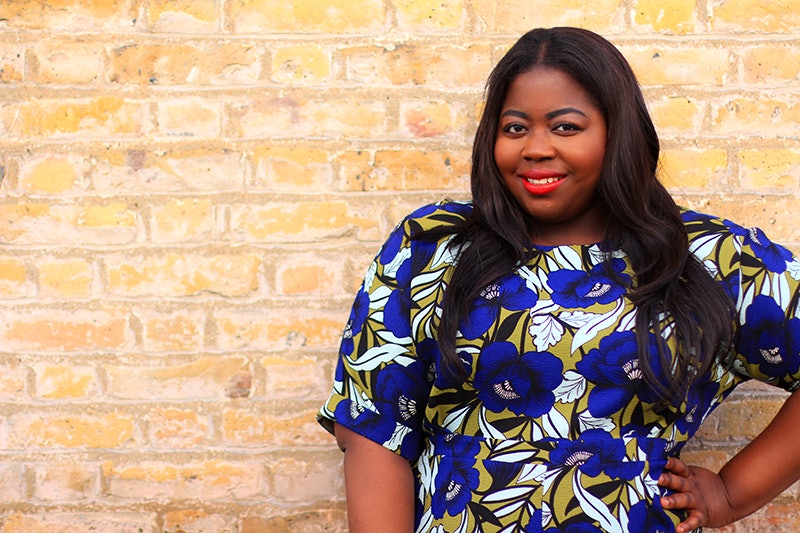 After a slight hiatus from mainstream consciousness, the debate surrounding dropping the plus is back. Much like last time around — when Australian model Stefania Ferrario and former Biggest Loser host Ajay Rochester were spearheading things — the figureheads of #DropThePlus circa 2016 are women who either aren't visibly fat at all, or who don't want to be.

Curve model Ashley Graham is a vocal fan of swapping "plus size" for "curvysexylicious" (which as Twitter user MissInformed11 pointed out, "Imagine [saying] that in a store. 'I need a sexylicious dress for my grandmother's funeral?'"), even giving a Tedx talk about how the term has made her feel like an outsider. Then there's actor Melissa McCarthy, who is of the mindset that telling people they are plus size is equatable to saying, "You’re not really worthy."

I can understand their feelings to a degree. Graham is on the cusp of straight and plus sizes, and I imagine having the label pushed onto her has limited the industry jobs available to her (which would suggest a deeper issue within the industry, TBH). McCarthy is no longer that visibly plus size herself, and wants to distance herself from labels altogether. But it's the correlation between "plus" and a lack of worth that irks me — because "plus size" is only a negative if we continue to perpetuate the idea that being plus size is a negative; that being fat is inherently bad. Also, it's just not really up to the less marginalized to decide what the more marginalized get to call themselves.

As for actual fat women and proponents of fat acceptance, many are empowered by the label. After all, until we live in that sizeism-less utopia where all brands carry all sizes, all bodies are given equal representation, and no body is ever made to feel inferior for the way it looks, it's more than a little useful. I talked to 15 women about their thoughts via social media and email, and here's what they all had to say about keeping the plus.

Debz Aiken of Wannabee Princess' statement was incredibly poignant from start to finish.

"I've been the fat girl shopping for clothes, looking through racks and racks of items that don't fit my body. I've been the teenager desperate to love my body without knowing how or why I should accept myself. I've been the girl growing into a woman desperate for a role model to tell me that my body is OK... I found it when I started searching for plus sizes.

"Yes, I would love to live in a world where labels like this weren't needed. But the fact of the matter is — we need them. I need them and I'm not ready to let it go.

"I want girls to be able to search for plus size bloggers and see women who look just like them being happy and confident. I want to know which shops want my hard-earned money and which ones to avoid.

"Until you can promise me a world that caters wholeheartedly to my body, I demand a way for me to find the people, the clothes, and the lifestyle that does and the best place to find that is under the plus size label.

"Rather than fighting for a harmless phrase to be removed, we should be looking at the bigger picture. Why aren't the models who hate this phrase fighting for more size inclusive clothing? Why aren't the brands that want rid of it using models who are at the larger end of plus size? Why aren't we calling for greater understanding of bodies and eradicating bullying at school? Why aren't we demanding a better world for fat people? It's not the word 'plus size' that hurts us, but the way people let the world treat us. Fix that and you'll fix the need [for] a separate phrase to describe us."

Even if the term plus size wasn't an empowering one on personal or emotional levels for a lot of people, there's still a practicality issue at hand. "[The reason we need] plus size sections in store is the same reason we need a category for wide fit shoes," Stephanie Yeboah of Nerd About Town tells me. "[Without it], it'll be a nightmare trudging through item after item hoping for something that fits instead of just zip-lining straight to my zone."

Reclamation of the term plus size has also been a way to connect and build community amongst marginalized identities. "It's an easy way for me to search bloggers, reviewers, and brands," blogger Margot Meanie tells me. "It's not negative, it's descriptive and it's above all helpful. I found an entire community all from the term 'plus size,' which makes it almost magical."

Over on Facebook, Sara Jean jokes, "It's like in school when they administer grades. Getting an A is great but if you add the plus it makes it even more spectacular. A+ to keeping plus size!" Contemporary and political uses of the term aren't supposed to be divisive. They're usually just supposed to lift people up.

Perelandra Beedles (aka Betty Pamper) of Pamper And Curves feels that the link between "drop the plus" and "fat is bad" is undeniable. "No one is campaigning to 'drop the petite' or 'drop the tall,'" she says. "[The notion of dropping the plus] still promotes the idea that to be called 'plus size' is a negative thing. It's just a descriptor that helps me find awesome clothes to rock my fat body."

She adds that in order to forgo this descriptor, sociocultural norms need to have changed. "When we reach textile utopia and all clothes are available in all sizes, then for sure let's do away with it. But until we get to that golden time, hands off."

The inimitable Marie Denee of The Curvy Fashionista directed me to an impassioned blog post she posted on the subject. In it she wrote, "These magazines, brands, and retailers are trying to change the conversation, trying to push back against the confidence-yielding, fashion forward loving, and rightfully frustrated narratives being put out there," referring to proponents of dropping the plus.

Rather than putting effort into deconstructing a term so many fat women have come to embrace, she says, "Do not change it to another name, start a hashtag campaign, or Instagram contest… JUST MAKE DOPE CLOTHES. PERIOD."

Similarly, Jessica Hinkle of Proud Mary Fashion doesn't see what benefit dropping the plus would have unless the retail landscape underwent some serious revamping. "It's hard enough to shop as a fat woman, usually designated to some dingy corner of the store. If we didn't have the label of plus size, it would honestly just be that much harder to find," she says.

She adds that pleading to get rid of the label is "further stigmatizing being fat. It's saying there's something wrong with it and thus we need to get rid of it. You want to give us a minority of the shopping options, but also take away the identifier that makes it easier to find those options? [It's] like we should have to work that much harder to clothe ourselves (like a punishment) because being fat is wrong."

As for style guru and #EffYourBeautyStandards proponent Natalie Hage, she believes that "it's society's fatphobic rhetoric that makes people want to not only drop the plus, but run away from it screaming in the other direction." It takes a lot of work to reclaim words connoted with hatefulness, and fat individuals have worked hard AF to embrace all things plus.

A recurring theme amongst the women I spoke to was the feeling that dropping or keeping the plus would be a non-issue if fat people weren't quite as socially loathed as they are now. "'Plus size,' like 'fat,' 'curvy,' etc. is just a descriptor," Liz Black of P.S. It's Fashion tells me. "The stigma behind those terms should be what we're trying to fix, not just simply banning or calling a word 'bad.' [...] Also, those who typically speak against the use of 'plus size' are not actually plus size." Which all comes back to not making decisions for marginalized communities that you don't necessarily belong to.

Kellie Brown of And I Get Dressed tells me she's "more interested in dropping the stigma that being plus size or fat is a bad thing, something to be ashamed of, or to mock."

Echoing the sentiments of many of the women I spoke to, she asks, "As a marginalized shopper, am I to sift through the thousands of products in a store in hopes to find the 40 items in my size, or do I want to have an indicator like 'plus size' so that I can find what will work for me?" The thought of having to plod through even more clothes unavailable in plus sizes feels genuinely hellish.

"I'm fine with plus size," Melissa Mazza tells me. "The issue for me is the assumptions society has assigned to the term: lazy, sloppy, unhealthy. You know, the usual suspects." But combatting ingrained size discrimination likely isn't going to happen if we have to curb the reclaimed and positive descriptions we use for our bodies.

"I'm plus size. I'm fat. I'm curvy. All of those things are OK," Sophie Griffiths of Busy Little Fee tells me via email. She also has a couple qualms with the way fat and plus-specific media is covered. "Not only does mainstream media deny [fat people] the right to exist in their own bodies without constantly [telling] them that it isn't OK, but now [...] women are introducing shame to phrases that we've worked hard to take back for ourselves."

She urges us to ask ourselves, "Why don't you want to be called plus size? What is so bad about my body, and the bodies of my friends, that forces you to disassociate so passionately from it?"

Danielle of @Glassicals brings up a great point about being comfortable in your body. She doesn't take issue with the term plus size because, "I know I'm fat and IDC. I'm happy with my body, so I don't find the plus triggering or insulting. I have a big body and need big clothes."

Although Lalalalalemon's Marie doesn't necessarily mind whether the term is kept or dropped, she believes that the policing of fat-specific terms by non-fats needs to stop. "I don’t really think so-called 'average sized' women should police us fat ones," she tells me. "I definitely think terminology is a topic the community it applies to should address. [Much like] it’s inappropriate for cis people to decide the terminology used by the trans community."

Ultimately, the language a community — or even just an individual — uses to describe itself shouldn't be up for debate amongst the folks who don't identify with that community. Dropping the plus would be a non-issue if fatness in and of itself was less stigmatized, but the solution is not to continue stigmatizing things associated with fatness.

As we await the existence of that utopia, we need to be allowed to reclaim the words that we see fit. We need to be able to live our big fat truths.

More like this
What’s The Kibbe Body Type Test That’s All Over TikTok?
By Marilyn La Jeunesse
10 Nail Trends That Perfectly Capture The Early 2000s
By Paris Giles
Ed Hardy-Inspired Cross Nail Designs Are Majorly Trending
By Danielle Sinay
Machine Gun Kelly Wore A $30K Diamond Mani To The BBMAs
By Paris Giles
Get Even More From Bustle — Sign Up For The Newsletter