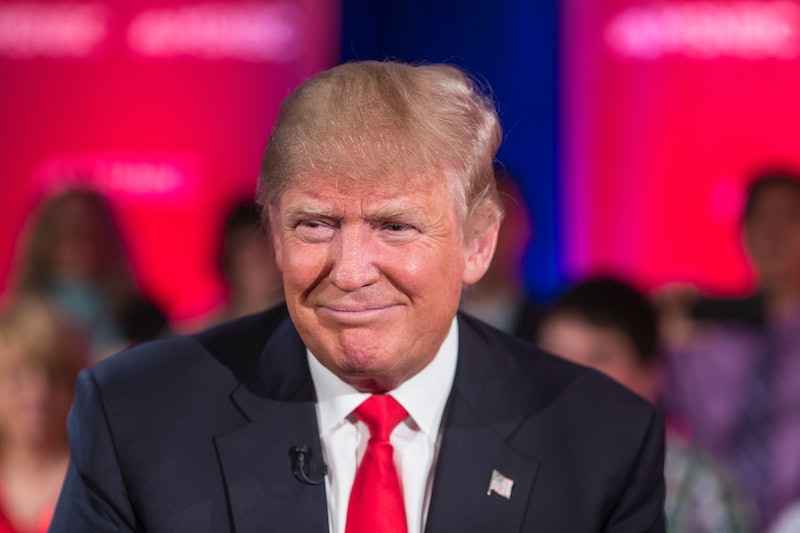 GOP presidential frontrunner Donald Trump is facing massive backlash over his statement that abortion should be illegal and that women should be punished for having them. Faced with questions from MSNBC's Chris Matthews to clarify just what his stance is as a pro-life candidate, he at first attempted to evade Matthews' line of questioning before eventually relenting. Donald Trump's full comments on abortion appear to be as contradictory as they are troubling.

A full transcript has been released of the heated exchange between Trump and Matthews, which starts out with a request for The Donald to define his "stance on women’s rights and their rights to choose in their own reproductive health." Trump stated that he was pro-life "with three exceptions," which he failed to define. He made vague comments about the importance of electing someone who will nominate a viable Supreme Court justice, appearing to attempt to sidestep Matthews' questions entirely.

"This is not something you can dodge," Matthews said, as he pressed Trump to answer whether a woman should be punished for receiving an illegal abortion, and what that could potentially entail. Trump's most damning comments came before grilling Matthews about his religion and adherence to his church's views:

Well, you know, you will go back to a position like they had where people will perhaps go to illegal places but you have to ban it ... The answer is that there has to be some form of punishment [for the woman].

Trump later attempted to "clarify" his statements at the Appleton, Wisconsin town hall. His camp put out a statement to MSNBC, and released a detailed statement that appears to contradict what Trump initially said about abortion:

If Congress were to pass legislation making abortion illegal and the federal courts upheld this legislation, or any state were permitted to ban abortion under state and federal law, the doctor or any other person performing this illegal act upon a woman would be held legally responsible, not the woman. The woman is a victim in this case as is the life in her womb. My position has not changed. Like Ronald Reagan, I am pro-life with exceptions.

Needless to say, no one is happy with Trump's comments. Pro-life groups have condemned his statements, including March for Life and Susan B. Anthony List. Despite the candidate claiming to share ideology with such organizations, his comments call his stance into question. March for Life President Jeanne Mancini had this to say about Trump's troubling abortion comments:

Mr. Trump’s comment today is completely out of touch with the pro-life movement and even more with women who have chosen such a sad thing as abortion. Being pro-life means wanting what is best for the mother and the baby ... No pro-lifer would ever want to punish a woman who has chosen abortion. This is against the very nature of what we are about.

Other presidential hopefuls have also voiced their displeasure, including fellow GOP presidential candidate John Kasich and Democratic candidate Bernie Sanders. Both Kasich and Sanders were interviewed on MSNBC programs regarding Trump's statements. Kasich's response stands out in particular because the Ohio governor predicted Trump's next course of action.

"Probably, Donald Trump will figure out a way to say that he didn't say it or that he was misquoted," Kasich said. Trump's backtracking has become so predictable that even other politicians are taking notice. No matter what else Trump has to say about abortion, it appears that his main focus will continue to be spinning such comments in his favor rather than firmly establishing a position on such an important issue.

Here's the interview in full:

QUESTION: Hello. I am (inaudible) and have a question on, what is your stance on women’s rights and their rights to choose in their own reproductive health?

TRUMP: OK, well look, I mean, as you know, I’m pro-life. Right, I think you know that, and I -- with exceptions, with the three exceptions. But pretty much, that’s my stance. Is that OK? You understand?

MATTHEWS: What should the law be on abortion?

TRUMP: Well, I have been pro-life.

MATTHEWS: I know, what should the law -- I know your principle, that’s a good value. But what should be the law?

TRUMP: Well, you know, they’ve set the law and frankly the judges -- I mean, you’re going to have a very big election coming up for that reason, because you have judges where it’s a real tipping point.

TRUMP: And with the loss the Scalia, who was a very strong conservative...

MATTHEWS: I know. I never understood the pro-life position.

TRUMP: Well, a lot of people do understand.

MATTHEWS: I never understood it. Because I understand the principle, it’s human life as people see it.

TRUMP: Which it is.

MATTHEWS: But what crime is it?

MATTHEWS: No, should the woman be punished for having an abortion?

MATTHEWS: This is not something you can dodge.

MATTHEWS: If you say abortion is a crime or abortion is murder, you have to deal with it under law. Should abortion be punished?

TRUMP: Well, people in certain parts of the Republican Party and Conservative Republicans would say, “yes, they should be punished.”

MATTHEWS: How about you?

TRUMP: I would say that it’s a very serious problem. And it’s a problem that we have to decide on. It’s very hard.

MATTHEWS: But you’re for banning it?

TRUMP: I’m going to say -- well, wait. Are you going to say, put them in jail? Are you -- is that the (inaudible) you’re talking about?

MATTHEWS: Well, no, I’m asking you because you say you want to ban it. What does that mean?

MATTHEWS: What is ban -- how do you ban abortion? How do you actually do it?

TRUMP: Well, you know, you will go back to a position like they had where people will perhaps go to illegal places

TRUMP: But you have to ban it

MATTHEWS: You banning, they go to somebody who flunked out of medical school.

TRUMP: Are you Catholic?

TRUMP: And how do you feel about the Catholic Church’s position?

MATTHEWS: Well, I accept the teaching authority of my Church on moral issues

TRUMP: I know, but do you know their position on abortion?

MATTHEWS: Yes, I do

TRUMP: And do you concur with the position?

MATTHEWS: I concur with their moral position but legally, I get to the question -- here’s my problem with it...

TRUMP: No, no, but let me ask you, but what do you say about your Church?

What do you say about your church? They’re very, very strong.

MATTHEWS: Do you believe in punishment for abortion, yes or no as a principle?

TRUMP: The answer is that there has to be some form of punishment

MATTHEWS: For the woman

TRUMP: Yes, there has to be some form

MATTHEWS: You take positions on everything else.

TRUMP: Because I don’t want to -- I frankly, I do take positions on everything else. It’s a very complicated position.

MATTHEWS: But you say, one, that you’re pro-life meaning that you want to ban it

MATTHEWS: I’m not talking about my religion.

MATTHEWS: I’m asking you, what should a woman face if she chooses to have an abortion?

TRUMP: I’m not going to do that.

TRUMP: I’m not going to play that game.

TRUMP: I am pro-life.

TRUMP: And so is the Catholic Church pro-life.

TRUMP: What is the punishment under the Catholic Church? What is the...

MATTHEWS: I’m asking you. You want to be president of the United States.

MATTHEWS: You tell me what the law should be.

MATTHEWS: Just tell me what the law should be. You say you’re pro-life.

TRUMP: I am pro-life.

MATTHEWS: What does that mean

TRUMP: With exceptions. I am pro-life.

I have not determined what the punishment would be.

TRUMP: Because I haven’t determined it

MATTHEWS: When you decide to be pro-life, you should have thought of it. Because...

TRUMP: No, you could ask anybody who is pro-life...

MATTHEWS: OK, here’s the problem -- here’s my problem with this, if you don’t have a punishment for abortion -- I don’t believe in it, of course -- people are going to find a way to have an abortion.

TRUMP: You don’t believe in what?

MATTHEWS: I don’t believe in punishing anybody for having an abortion

MATTHEWS: Of course not. I think it’s a woman’s choice.

TRUMP: So you’re against the teachings of your Church?

MATTHEWS: I have a view -- a moral view -- but I believe we live in a free country, and I don’t want to live in a country so fascistic that it could stop a person from making that decision.

MATTHEWS: That would be so invasive.

TRUMP: I know but I’ve heard you speaking...

TRUMP: But I’ve heard you speaking so highly about your religion and your Church.

TRUMP: Your Church is very, very strongly as you know, pro-life.

TRUMP: What do you say to your Church?

MATTHEWS: I say, I accept your moral authority. In the United States, the people make the decision, the courts rule on what’s in the Constitution, and we live by that. That’s why I say.

MATTHEWS: Can we go back to matters of the law and running for president because matters of law, what I’m talking about, and this is the difficult situation you’ve placed yourself in.

By saying you’re pro-life, you mean you want to ban abortion. How do you ban abortion without some kind of sanction? Then you get in that very tricky question of a sanction, a fine on human life which you call murder?

TRUMP: It will have to be determined.

MATTHEWS: A fine, imprisonment for a young woman who finds herself pregnant?

TRUMP: It will have to be determined.

MATTHEWS: What about the guy that gets her pregnant? Is he responsible under the law for these abortions? Or is he not responsible for an abortion?

MATTHEWS: Well, they’re usually involved. Anyway, much more from the audience here at the University of Wisconsin, Green Bay. We’ll be right back.