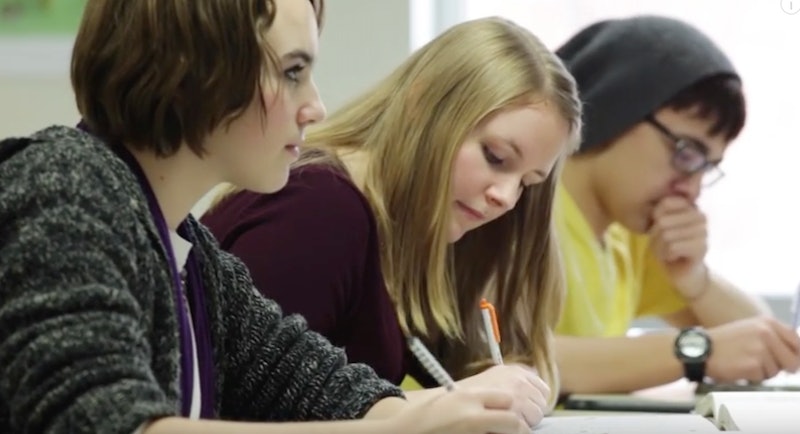 Today’s cost of college tuition is high, and when you compare it to what our parents paid back in the day, it seems like we got a particularly raw deal. If you have ever wondered what brought this about, BuzzFeed’s latest video clearly breaks down how the price of college has changed since the 1970s. In 1975 the average cost of attending a public university was $7,833 (in 2015 dollars) including tuition, fees, and living expenses. Today the cost has more than doubled, climbing to $19,548. If you think that it’s totally unfair — you’re right!

In today's economic climate it seems a college diploma is a necessity for successfully entering the work force, and people are willing to pay the exorbitant costs, if it will give them a better shot at their career. "Increases in college tuition at public colleges, particularly in recent years, have really been unacceptable. And there's no question that that is a much higher percentage of median [family] incomes than it used to be," Sandy Baum, a senior fellow at the Urban Institute, told NPR for their piece "How The Cost Of College Went From Affordable To Sky-High."

Student loan debt is a major concern and thinking of how you can afford to pay for higher education without a large scholarships is enough to make anyone hyperventilate. This crisis of cost has many contributing factors that make the steady rise of tuition a bit more complicated. In the new video, BuzzFeed maps out how these circumstances have resulted in the increased average yearly tuition.

Sadly, it’s cold comfort unless major changes are made by the government in terms of expanding scholarships and affordable education options, raising minimum wage, and relieving student loan debt. When you hear your folks’ stories it seems everything was cheaper in the ‘70s from rent to food. You could pay for college while working a minimum wage job, and still have time to do your classwork. Sigh. Here are some of the differences that contributed to the pickle we are in today:

More students attending college, means schools have to build more facilities to accommodate the demand. The universities also have to add more administrative employees and faculty. But the salaries of these employees are nothing compared to what certain schools choose to pay athletic coaches. Some college football coaches are making millions of dollars a year, with contracts that surpass even the NFL. Guess who is paying for these rising sports salaries? Yup. You are.

John Thelin, author of A History of American Higher Education, told NPR that from "1965 to 1972, colleges and universities dug very deep into their own pockets to provide grants and other forms of student financial aid in partnership with the new federal programs." Today, many schools site cuts in this funding as the reason for making college less affordable. "So it's not that colleges are spending more money to educate students... It's that they have to get that money from someplace to replace their lost state funding," Baum told NPR. The institutions ask students to make up for the lost state funding, says The Center On Budget And Policy Priorities. Click on their interactive map to see the decrease in public higher education funding in your state!

College tuition and fees are climbing higher and yet raising minimum wage has slowed to a crawl. In 1975 minimum wage was $2.10 which is equivalent to $9.25 today when adjusted for inflation. BuzzFeed points out that in order to pay off tuition in the '70s a student would only have to work 17 hours a week, compared to the 54 hours that a student would have to work in 2015. It is impossible to have a full-time job and still make time to attend classes and finish schoolwork. No wonder the average student loan debt is over $35,000. Better hope that college diploma gets you a high-paying job immediately. Or maybe getting an education in America should be made more affordable? Just an idea.

Check out the full video here and prepare to be filled with righteous anger:

More like this
TikTok Has A Genius Old School Hack For Saving Money
By Sophie McEvoy
6 Anti-Police Brutality Organizations You Can Support Right Now
By Syeda Khaula Saad and JR Thorpe
These Artists Are Reimagining Black History Month To Create A Better Future
By Katie Mitchell
25 Inspiring Quotes From Black Women To Celebrate Black History Month
By Kyli Rodriguez-Cayro and JR Thorpe
Get Even More From Bustle — Sign Up For The Newsletter
From hair trends to relationship advice, our daily newsletter has everything you need to sound like a person who’s on TikTok, even if you aren’t.