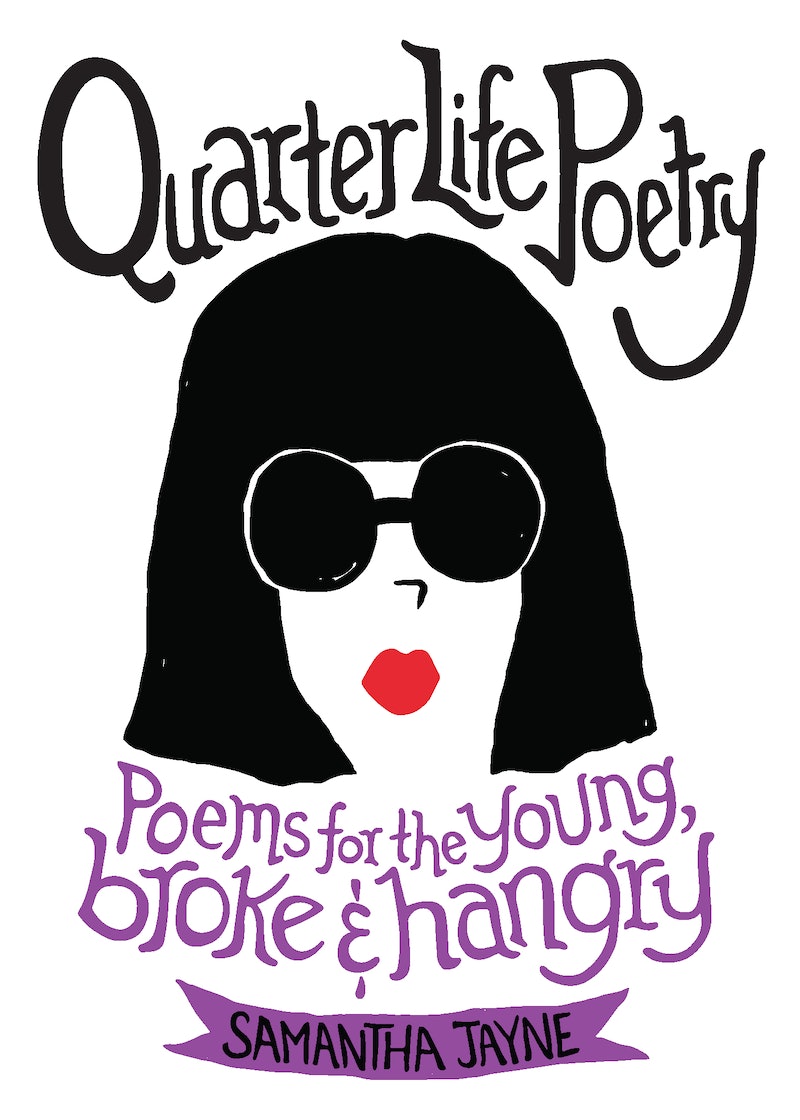 Over the past week or two, you may have spotted a series of videos depicting Millennial life in some of the most hilariously accurate ways you’ve ever seen. Grouped collectively under the title “The Struggle,” they highlight the kinds of existential dread pretty much every Millennial — and probably a whole lot of other people, too — has felt at one point or another. But the videos, as amazing as they are, aren’t actually a standalone project. They’re teasers for the book Quarter Life Poetry: Poems for the Young, Broke, and Hangry by Samantha Jayne, released April 5. Based off of the Instagram and Tumblr of the same name, the book features brightly colored illustrations paired with short, four-line rhymes like, “Socioeconomics/ Was a subject I enjoyed./ It gave me tools to rationalize/ Why I’m unemployed.”

Needless to say, the videos, the book, and of course the original Instagram and Tumblr are a few of my favorite things in the history of the universe.

I first discovered Quarter Life Poetry in the middle of April of 2015, and although I’m on the older end of the Millennial scale — as someone who was born in 1985, I straddle the line between Millennial and Generation Y — a huge number of the scenarios depicted in the Instagram and Tumblr images were instantly recognizable to me. Why, yes, I’ve experienced awkward moments with honorifics; yes, I have lived in apartments with… uh… quirks; and yes, my MFA does often weep silently in a drawer. Quarter Life Poetry not only reminds us that we’re all struggling together, but also that there is healing power in laughter.

Like many creatives, Quarter Life Poetry mastermind Samantha Jayne is intimately familiar with the conflict between wanting to make your career in a field that’s meaningful to you, but also knowing that our culture has arbitrarily deemed certain skill sets to be unworthy of payment in actual money. “I always had a hard time answering ‘what I wanted to be when I grew up’ because I had so many interests,” Jayne tells Bustle via email. “I acted from an early age, and I also loved fine arts. But when I realized that paying rent and eating [were] necessary, I decided to get practical and go for an Advertising Design degree at FIT.”

After working as an art director at a couple of ad agencies, however, she started to feel, as she puts it, “stuck.” “Existential dread began washing over me pretty frequently,” she says. “I knew I needed to make a big change or I’d always regret it. So with a mantra of ‘yolo’ echoing in my brain, I packed up and moved to the West Coast.” She’s now primarily an LA-based actress, although of course she’s still putting her design skills to work with the Quarter Life Poetry project.

According to Jayne, the idea for Quarter Life Poetry came about gradually. “It became clear to me over recent years that my generation is totally living a double life: There’s our actual selves, with all our faults and vulnerabilities and frustrations, and then there’s a carefully curated version we display on social media,” she explains. Not only that, but when we browse social media, we're not only crafting our own appearance, but looking at everyone else's crafted appearances, too, which can really do a number on our headspace. There's even a scientific name for it: Social comparison. And studies have found that it can make us feel depressed and isolated, prompting us to believe that we're the only people going through these tough times — and that we can't reveal that all is not well for fear of appearing less than our best.

That's where Quarter Life Poetry comes in: It's an antidote. “I created Quarter Life Poetry last year as a way to make it OK to laugh and share in all the daily struggles we don’t talk about," Jayne tells Bustle. “I found that turning a weird personal struggle into a simple four-line poem immediately put it into perspective and made it OK to laugh about and share.” Although all of the struggles she writes and illustrates are so personal for her, she notes that she’s been both surprised and delighted that they resonate for so many others as well. And for the curious, yes, she sees the irony in the fact that Quarter Life Poetry has seen such success on social media: “It was an honest dialogue, on Instagram of all places — the app that used to make me feel isolated,” she says.

Like Quarter Life Poetry itself, “The Struggle” videos are also “100 percent autobiographical,” according to Jayne, who both wrote and starred in them — except, of course, for the fact that they’re comedic in nature. “I promise, nothing was funny to me about these situations when they were actually happening,” she says. But, also like Quarter Life Poetry, the situations depicted in the videos are infinitely relatable. We’ve all had that moment at work where we suddenly feel the bottom of the world drop out from beneath us as we spin away into an existential quandary about what exactly we're doing with our lives, as in “Mortality”:

We’ve all had awkward one-night stands and stayed for awkward morning-after breakfasts purely for the free pancakes, as in "Morning After":

We’ve all canceled plans at the last minute because honestly, we just want to stay at home in our PJs and Netflix and chill all by ourselves, as in "Going Out":

And we’ve all called our parents or another trusted adult to ask utterly inane questions that we really, really need to know the answers to, as in "Mom Talk":

But while many of us can probably all relate to all four videos, I’m willing to bet that for each of us, there’s one in particular that really hit home. For me, it was “Mom Talk”: During my early 20s, I had every single one of these conversations with my parents. Granted, I also did a lot of Googling in conjunction with them (that’s how we all keep track of holidays these days, isn’t it? By Googling “Thanksgiving 2016” and thanking the search gods for their all-knowing reach?), but sometimes, the Internet is just no substitute for talking to an actual person.

It’s a commonly-held complaint that Millennials want to be coddled all the time, but like many stereotypes, it’s inaccurate — which is another reason that "Mom Talk" resonated so strongly with me. The truth is that we ask these kinds of questions to people who we think might know the answers not because we want them to do our "adulting" for us, but because we want to arm ourselves with the knowledge we need to do it ourselves. (School teaches us many things, but what all those tax forms mean isn't usually one of them.) Shaming people for asking for help when they need it is unconstructive at best and actively harmful at worst — it sends the message that asking for assistance is “weak,” when a lot of the time, it’s actually one of the smartest things you can do.

What I really mean by all this is, the struggle is real, and sometimes, it really just helps to laugh about it. That’s what the Quarter Life Poetry Instagram, “The Struggle” videos, and the book itself give us permission to do. And it’s magnificent.

As for Jayne’s favorite Quarter Life Poem? She considers them all her “sad babies,” but she’s particularly fond of this one:

“I moved to New York when I was 17 and did all of my wild clubbing then,” she says. “Gone. I have absolutely no desire to wear a tiny dress out in the freezing cold only to squeeze into a sweaty hot box to sip vodka cranberries as I gyrate to a 90-decibel mash-up of Bieber/Swedish House Mafia. I’m a 26 year old woman. I like my couch and plants and candles and sweatpants and this recipe for banana bread.”