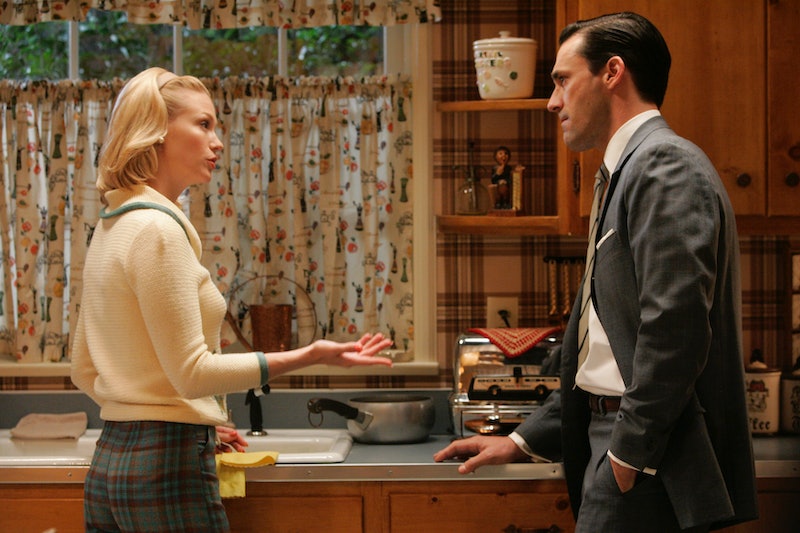 Wanna know what your chances are of getting divorced and get super depressed at the same time? Check out this handy interactive graph that shows divorce rates of different demographics. Created by statistician Nathan Yau for Flowing Data, the graph illustrates how divorce rates fluctuate throughout men and women’s lives and how those rates shift according to factors like education, employment, and race. We tend to hear a lot of (often erroneous) statistics about divorce in general, but what this graph illustrates is that a variety of factors, many of which are out of our control, play into how marriages fare in the long term.

Yau used data from the 2014 American Community Survey to calculate how often and at what age people divorce or remarry. Using buttons on the graph, you can switch between different demographic factors to see how they affect divorce rates, as well as how they affect men and women differently. For example, the chart below shows the divorce statistics for employed women (represented by the green line) and men (in orange). Divorce rates for employed women peak at 38 percent, and for men at 32 percent.

The graph also gives insight into how certain factors may affect divorce among men and women differently. For example, among people whose education does not extend beyond high school, men are more likely to get divorced than women. But when it comes to people with higher education (either a bachelor’s or advanced degree), that dynamic flips; among those with these higher degrees, it’s women who are more likely to divorce.

Before you get bogged down in the feeling that marriages are all doomed to break up, note that there is a silver lining to this information: While the data shows that a lot of people get divorced, it also shows that the majority of people don’t. We often hear the claim that half of American marriages end in divorce, but Yau argues that this is a myth that “comes from naively dividing the divorce rate by the marriage rate.” The graph shows that no demographic has a divorce rate that goes above 45 percent. Yau’s data supports a 2014 New York Times article by Claire Cain Miller that claims that, despite stereotypes that marriage as an institution is going to hell in a hand basket, divorce rates have actually been falling since the 1980s. Miller attributes this decrease in divorce to birth control, changing roles for women, and the fact that people are getting married later than they used to.

To see more of Yau’s break down of divorce rates by demographic, check out the graph here.

More like this
25 Inspiring Quotes From Black Women To Celebrate Black History Month
By Kyli Rodriguez-Cayro and JR Thorpe
I Spent 2 Years Trying TikTok’s Dating Advice
By Kailynn Johnson
Channing Tatum Calls Walking Away From Relationship With Jenna Dewan “Terrifying”
By Radhika Menon
5 Signs You Have A Toxic Relationship With Yourself
By Lexi Inks
Get Even More From Bustle — Sign Up For The Newsletter
From hair trends to relationship advice, our daily newsletter has everything you need to sound like a person who’s on TikTok, even if you aren’t.