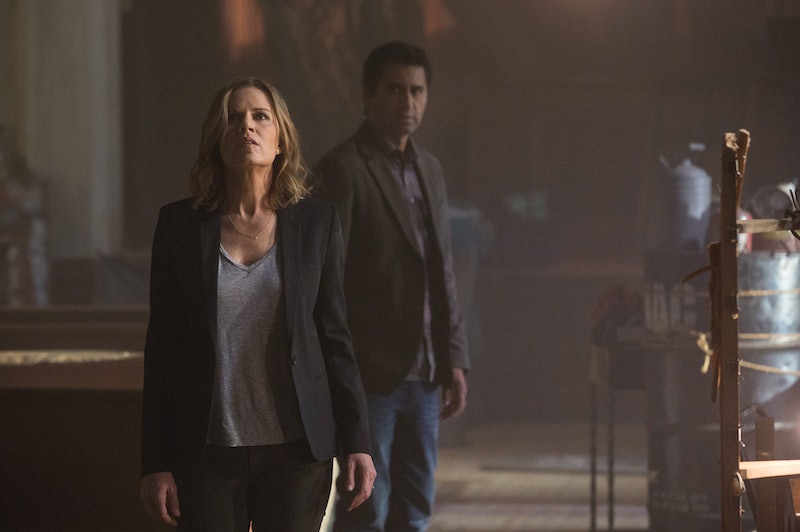 Madison Clark may not be a household name like Rick Grimes, but she should be. Fear The Walking Dead is returning for Season 2 on April 10 (with its own Talking Dead episodes to boot) and promises to both bring the drama and fill the emotional void that Negan's arrival has caused during the Walking Dead Season 6 finale. In preparation for the premiere, let me recap Fear The Walking Dead Season 1. Whether you haven't had the chance to refresh, or are so intrigued by the ominous ad campaign that you're ready to jump into Season 2 cold, this guide is here to help.

The AMC series is set in California, so it definitely has a different look compared to The Walking Dead — there's more blue water and yellow desert, compared to the green and brown of Georgia. While it takes place at the beginning of the apocalypse, this isn't exactly a prequel to or a direct spin-off of The Walking Dead. It's pretty much physically impossible for the two shows to share any characters, so it's more of a companion series. According to the official AMC press releases, the series (or at least Season 1) is taking place in the four to five weeks that Rick Grimes was in a coma. Other than that, they are two separate series set in the same world. Here's everything else you need to know from the first season.

The group of survivors formed primarily between three and a half families. There's Madison Clark, a widowed high school guidance counselor, and her two teenage children, Nick and Alicia. She teamed up with her English teacher boyfriend Travis Manawa, along with his ex-wife Lisa and son Chris. During a riot, they met Ofelia Salazar and her parents Daniel and Griselda, who were refugees from El Salvador in their youth. The only two that did not survive Season 1 were Lisa and Griselda.

The final member of their team is a man named Victor Strand, a wealthy and eccentric man who Nick meets towards the end of the season. We don't know much about Strand except that he's good at reading people, which is definitely going to be valuable in the days to come.

The Army Got Involved

Having to watch people learn how to kill walkers, both physically and emotionally, was not the most interesting part of Fear. We're so used to characters like Michonne and Daryl that these newbies were a little frustrating at first. However, one of the strengths of setting this series at the beginning of the outbreak was getting to see the government and military response first hand. In Season 1, the army occupied a suburb, and our heroes barely escaped after learning that the soldiers planned to kill all civilians and evacuate the area.

One of the most elusive aspects of Fear The Walking Dead was one of Madison's students, named Tobias, who seemed to understand what was going on in the world before anyone else did. While he didn't join the main group, I have a feeling we haven't seen the last of him.

Don't forget the spinoff of the spinoff which chronicled a walker attack on a plane headed to Austin, Texas. One of the characters from this series, played by Michelle Ang, will join Fear The Walking Dead in Season 2.

Finally, the "if I were in a zombie apocalypse, I would get on a boat" theory will be put to the test when Fear The Walking Dead returns. At the end of Season 1, Strand invited everyone onto "Alicia," his yacht. The next season is presumably set at sea, which opens up a lot of exciting possibilities. Will they encounter a zombie island? How long do you think it will take folks to turn to piracy? Fear The Walking Dead Season 1 was a lot of set up and introduction, and now that that's out of the way the fun will really begin.