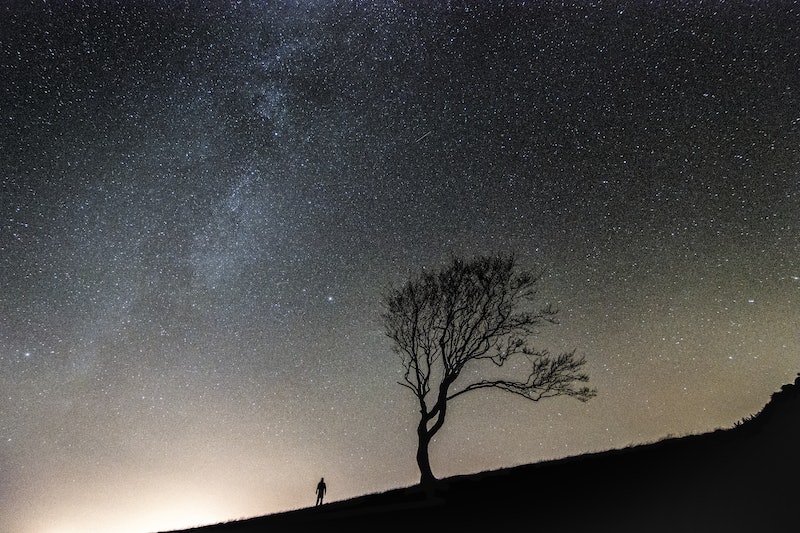 I’ll make a confession: I’m actually really not that into science fiction. While I love the idea of cool sci-fi worlds, I have the hardest time getting into the genre. I used to actually love it Sailor Moon was completely my jam, and everything was great until the very moment I saw the film Event Horizon . Suddenly, I became horribly aware of the fact that space had no air in it, and also was full of monsters that actually wanted to kill me. Of course, I knew (and still know) on an intellectual level that exposing yourself to the cold reaches of space will actually not make you bleed out of your eyes. However, there is absolutely no reason to believe that we are completely alone in space, and most likely, there are monsters out there. It’s because of all of this that I’m not the biggest fan of science fiction; it touches too deeply on a subject that I fear may be real.

However, I love speculative fiction, mostly fantasy of course, but on occasion I do attempt to reach into the science fiction world, as evidenced by my abiding love of Kurt Vonnegut. It’s for that reason I’ve compiled a list of 11 science fiction novels that even non-science fiction readers will enjoy. We have epic space operas, alternate histories, and everything in between. Even if you don’t like outer space, you’ll still like these books.

This book is set in the near future where animals have been integrated into society as fully fledged members and police monitor citizens by their karma letters. Gun, With Occasional Music centers on gumshoe Conrad Metcalf, who has been tasked with shadowing Celeste, the wife of a very rich doctor. The problem? He's a little in love with her. The situation gets even worse when the doctor turns up dead, and Conrad is caught in the crossfire between gangsters and police. A little bit of noir, a little bit of sci-fi, and absolutely perfect for those who don't want to get into outer space right out of the gate.

2. The Handmaid's Tale by Margaret Atwood

Offred is a Handmaid in the Republic of Gilead, a patriarchal society so intense that women are no longer allowed to read. Her role as a Handmaid means that she is only as valuable as her own fertility, and once a month she must submit herself to a ritual and pray that she becomes pregnant by her owner, the Commander. For those who don't like sci-fi because it mostly seems like people in space ships with ray guns, The Handmaid's Tale will change your mind about the genre.

3. The Stars My Destination by Alfred Bester

Set in a fun techno-future where people are able to "jaunte" thousands of miles within moments and the rich barricade themselves in giant labyrinths and protect themselves with radioactive hit-men, The Stars My Destination centers on Gully Foyle, considered to be a bit of a genetic dead end, left for dead on the crippled ship where he works, Gully awakens all of his potential and directs it all towards one thing: vengeance. Lifting himself up by the bootstraps, he becomes a crazy monster bent on violence and revenge. For those who haven't figured it out yet, it's basically The Count of Monte Cristo but in space. How cool is that?!

Yep, this book is science fiction. Slaughterhouse-Five centers on Billy Pilgrim, an otherwise ordinary man who becomes unstuck in time after being abducted by aliens from the planet Tralfamadore. This book follows Pilgrim through all phases of his life, including the time when he survived the bombing of Dresden in World War II as a prisoner of war. As a survivor of this very same bombing, Kurt Vonnegut offers chilling insight to the horrors of war. I may be biased, but this book is literature that transcends genre.

5. Daughters of the North by Sarah Hall

England is in a state of economic collapse in the dystopian future of this novel. All citizens have been herded into urban centers and subjected to a census where women are fitted with contraceptive coils, turning reproduction into a lottery. A woman known only as "Sister" escapes her oppressive marriage and runs away to a remote farm in Northern England. There, she discovers a group of women living off the grid, and must figure out if she has it in her to become a rebel herself.

6. The Shining Girls by Lauren Beukes

Harper Curtis is a serial killer from Depression Era Chicago, but his kills have come from all over time thanks to a mysterious House that fuels his madness. There are the shining girls, special women who Harper feels destined to destroy before they can grow up to be whatever they are destined to be. These murders are perfect, Harper is untraceable... until one of his victims survives. After surviving her attempted murder, Kirby joins the Chicago Sun-Times to work with a former homicide reporter on a quest to find and bring Harper to justice.

Dirk Gently is a self-styled private investigator, and he's about to stumble on the case of a lifetime. Setting out to find the interconnectedness of all things, Dirk not only has to solve a gruesome murder, assist a mysterious professor, and eat as much pizza as possible, but he also has to save humanity from extinction along the way. This humor novel is full of hilarity, pizza, 200-year-old Chronologists, and so much more.

8. To Say Nothing of the Dog by Connie Willis

Connie Willis is a science fiction powerhouse and one of the most heavily awarded science fiction authors in history, but so few people know about her. To Say Nothing of the Dog takes place in an alternate history where time travel is real but mostly used for academic purposes. Ned Henry is exhausted after jumping back and forth between the 21st century and the 1940s on a quest to find a Victorian relic called the bishop's bird stump as part of an effort to reconstruct the famed Coventry Cathedral. However, after a fellow time traveler by the name of Verity Kindle accidentally takes something back from the past, he has to jump back in time to the Victorian era to set things right. This is a delightfully lighthearted science fiction romp with humor and adorable romance.

9. The City and the Stars by Arthur C. Clarke

Considered by many to be Arthur C. Clarke's finest novel, The City and the Stars takes place one billion years in the future on an Earth that is so old that oceans are a distant memory and humanity is on the brink of extinction. The people of the completely enclosed city of Diaspar are convinced that theirs is the only city left. Because of this, they have subjected themselves to the rule of a Central Computer, who repairs everything and creates the bodies of the people who live there, putting the minds of the citizens into these copied bodies. This results in a world of people who have all lived "past lives". However, Alvin, our protagonist, a "Unique" with no past lives. Free of the Central Computer's influence, Alvin embarks on a quest to escape the city and make a life for himself. The rest, as they say, is literary history.

10. The Sparrow by Mary Doria Russell

In the year 2019, Earth finds proof of alien life when a listening post in Puerto Rico picks up some beautiful singing coming from the planet of Rakhat. While the United Nations discuss a proper course of action to interact with these new beings, a quiet group of Jesuits prepare for a mission of their own. These missionaries discover an alien world that forces them to question what it means to be human.

Featuring one of the greatest fictional scientists in literary history, The Dispossessed centers on Shevek, as he sets out on a quest to find the answers to the unanswerable and tear down the walls of hatred that wall in his current society on the planet Anarres. In an effort to do this, he embarks on a journey to the utopian mother planet of Urras in an attempt to deconstruct society and, by doing so, utterly change it.

It's not all spaceships, ray guns, and science experiments in science fiction. In fact, alternate histories count, too. This book is set in an alternate universe where Jewish refugees have set up the Federal District of Sitka, a "temporary" safe haven created in the wake of the Holocaust and the shocking collapse of the nation of Israel in 1948. Homicide detective Meyer Landsman's entire life is in shambles: his marriage is dead, his career is a joke, and the love of his life (his ex-wife) is now his supervisor. When Meyer's neighbor, a chess prodigy and spiritual leader, turns up dead, Meyer sets out with his partner, half-Tlingit Berko Shemets, to solve the case before it threatens to destroy their entire society.