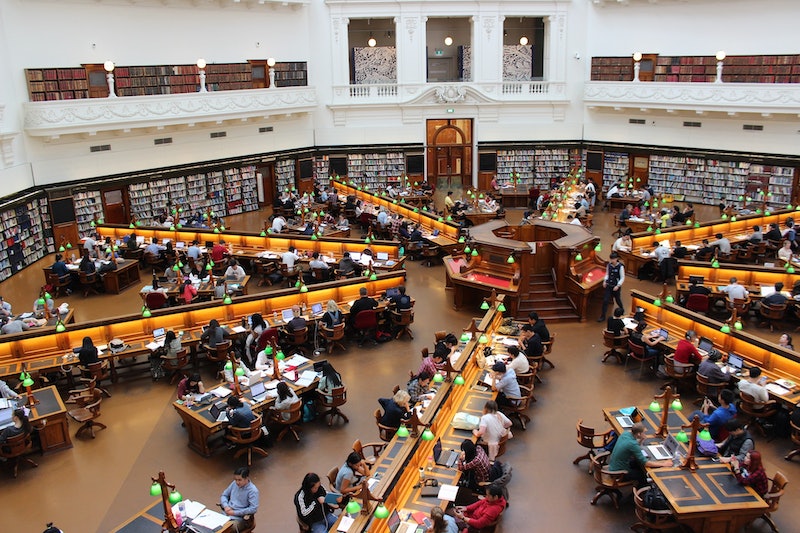 “It’s not a breakdown,” I told my husband when he suggested that my overloaded schedule had begun to affect my health. “I’m just under a lot of pressure right now.” And it was true. Last fall, I found myself enrolled full-time in a graduate writing program, teaching three college composition courses, editing a literary magazine, and freelancing to pay the bills. By October, my 60+ hour work week began to take its toll. I was having persistent cold-like symptoms, I often felt disoriented, and some nights I spent the better part of an hour crying in my car before I made it into the house.

I had struggled with anxiety and depression well through my undergrad years, but by the time I entered my late twenties, I thought I’d beaten it. I felt “cured.” When I became inexplicably dizzy, or when my heart began to throb like a fist beating against my chest, I shrugged it off as simple nervousness. I didn’t want anyone to think that I was unreliable or incapable, that I would somehow make a less worthy student or employee that anyone else.

My classmates and coworkers seemed to have it all figured out. They showed up looking perfectly polished, well-rested, prepared. Meanwhile, I was struggling to tame the wild stack of papers erupting from my bag, or searching my planner to confirm the day of the week (a habit that I still can’t shake). I felt like an impostor, as if at any moment someone might walk up to me and say, “You’re doing this all wrong!”

I explained what was happening, and he offered what seemed like a simple solution: I needed to lighten my load. But what could I give up? I couldn’t afford to let go of any of my jobs, and if I dropped any of my classes at that point in the semester I would put myself even further behind—not to mention, I’d lose my student loan money.

Little did I know that this was an epidemic. It never occurred to me that others might be experiencing the same, too hesitant to admit that they were struggling. It’s so common, in fact, that Stanford University has a name for it—“Duck Syndrome.” Particularly among millennials, we have a desire to appear calm and collected on the surface—much like a duck—but beneath the water, we are paddling frantically.

By the time I knew what was happening, I felt like there was little I could do about it. I was paddling just to keep my head above water, and I was quickly running out of energy. When I fainted suddenly in the middle of a meeting, I knew I couldn’t handle things on my own anymore.

I made an appointment to meet with a counselor at school — a free service offered to students — and he was able to work me in quickly. He was soft spoken, with a soothing quality to his voice, but that was not enough to put me at ease. I explained what was happening, and he offered what seemed like a simple solution: I needed to lighten my load.

But what could I give up? I couldn’t afford to let go of any of my jobs, and if I dropped any of my classes at that point in the semester I would put myself even further behind—not to mention, I’d lose my student loan money.

“I feel like I’m breaking,” I said. “I’m losing control.” When I admitted that it was difficult for me even to get out of bed in the morning, he suggested I consult a psychiatrist who could help me come up with a plan to make things more manageable.

That’s where I encountered the biggest obstacle of all: accessing the care I needed.

The counselor had given me a flier with a list of resources on it, websites I could visit and numbers that I could call. It was one dead end after another. Many of the local clinics or practices I contacted had the same answers— we aren’t accepting any new patients, we don’t take your insurance, our next available appointment isn’t for 16 weeks.

I called the information referral line, where they directed me back to the same clinics who couldn’t accommodate me. I called one crisis intervention hotline after another, most advising me to “call 911” if I was really in crisis. When I asked how an emergency room doctor could even begin to help me, they said I’d most likely be transferred to an in-patient psychiatric program.

I wasn’t suicidal. I didn’t need to be in a psych ward for two weeks. But I also couldn’t wait 16 weeks to see a doctor. Finally, I called the last available resource on the flier. They were my last hope, I told them. I needed to do something.

They had an important resource that doesn’t appear on many fliers or pamphlets. It isn’t advertised. My school counselor didn’t suggest it: a Crisis Walk-in Center. From there, they could refer me to a service or program that would best suit my needs.

The walk-in center was full of people who looked, well, normal. Many of them were dressed in business attire, as if this was just a casual stop they were making during their lunch breaks. If I had passed any of them on the street, I would never have guessed that they were struggling. I wondered, then, how many of my coworkers, acquaintances—students, even—were dealing with feelings similar to mine.

When my name was called, I was led into an office by a woman who had the air of an elementary school teacher — upbeat, smiling, speaking slowly and clearly. I recounted the events of the past few weeks, my fruitless efforts to find help, my exasperation. She suggested the day program, where I would come in every day from 9 am – 5 pm, maintaining my autonomy during the off hours. Since I couldn’t manage those hours and continue on with my own work schedule, I thought for sure that I had come to the end of the line. There was nothing I could do.

Instead, she smiled confidently and pulled a folder out from one of her desk drawers. They had a program designed for working adults. A program that could work around my schedule.

The program convened daily (or every other day, in my case), a sort of group therapy where a room full of people in my situation—other students and working adults who felt overwhelmed and alone—could share stories and commiserate. There was the accountant who feared every day that he would cost his company a huge sum with any miscalculation. The construction worker who had just lost his job and his wife in the same week. The teacher from a prestigious high school who felt crippled by the school’s high standards.

There were a startling number of college students at the Crisis Walk-in Center, and all with the same complaints: they were stretched thin, and they didn't know where to go for help on campus. If they hadn't found the walk-in center, they said, they didn't know what they would have done. For many students, especially those from out of state or without insurance, campus health resources are their lifelines.

During my short stint in the program, I felt a powerful wave of relief. I had a plan. I could manage my workload. I wasn’t alone.

Among college students, the need for effective and accessible healthcare has never been more critical. According to a 2012 National Alliance on Mental Illness (NAMI) survey, 50 percent of college students rated their mental health below average or poor and one in four students reported having suicidal feelings. The students have most often pointed to college websites as the primary means of information about help available on campus, but when survey respondents were asked if their colleges’ websites provide information about mental health, 64 percent responded “no” or “do not know.”

While information about theft, campus violence, and sexual assault is frequently a part of most college orientations (and rightfully so), little is mentioned about how to handle issues surrounding mental illness. Often, colleges provide free counselors or academic accommodations, but students must first know how to find these services.

“I have been more than satisfied with the counselor I see on campus,” one student survey respondent said. “However, the services are not heavily publicized and they are confusing going into.”

Aside from lack of information, students face a number of other obstacles when seeking help. The American College Health Association notes that many colleges and universities put a cap or limit on which services students may receive, and how often. In many cases, this is because counseling centers are understaffed, overbooked, or simply inexperienced. Frequently, due to the high volume of students seeking care, staff are unable to follow up. Excessive documentation is required to access mental health services and supports, leaving many students worried that their diagnoses will appear in their academic records or be made known to their instructors.

NAMI offers a number of suggestions to colleges for easing the burden on struggling students. Namely, they encourage that mental health issues be addressed at orientations and in welcome packets, much as any other serious issue a student is likely to face. In doing so, this lets students know that their issues are common and treatable, and that the college is willing to work with them.

Another student surveyed explains that “publicizing services helps reduce stigma. Also, when you are having a crisis, calling all over the campus or searching the website for hours would be the last thing on your mind.” I know I wish that I had discovered important resources sooner, and that I felt more comfortable openly discussing my own struggle with mental illness.

One major way that students are pushing back against stigma is by starting a dialog through social media. This past fall, incoming freshmen at the University of Pennsylvania created a Facebook page as a forum for sharing stories and offering support. After witnessing the overwhelmingly positive reaction to his group, the creator told The Daily Pennsylvanian that "it's been absolutely fantastic seeing what people have to say. I’ve seen people tell their deepest stories. It’s such a beautiful moment of catharsis when we see people telling their deepest secrets and trusting other people,” he said. “If we can foster that sort of trust, brotherhood and sisterhood, among our Penn class and Penn community, then I think that would solve not all but at least some of the problems that have occurred in the Penn community with depression and mental health.”

Some colleges are taking advantage of social media forums as well. Amherst College set up their own Mental Health and Wellness page providing suggestions on how to manage anxiety, wellness events on campus, and contact information for counseling centers. The counseling center at Towson University provides regular updates on their Facebook page, including helpful articles that discuss relevant mental health issues. "Being part of a group like this is great," one student who utilized the Towson Facebook group told me. "I can tell that everyone around me is supportive, and I always have someone I can talk to if I'm having a bad day or I need help."

The simple act of talking about mental illness can go a long way. When we share stories, we share resources. We create a network of support. We find comfort in knowing that, beneath the surface, we’re all paddling furiously to stay afloat.

More like this
How To Help Your Parents Talk About Mental Health
By Gina Tomaine
What Millennials Can Learn from Gen Z About Mental Health
By Lexi Pandell
What Forest Bathing Is & Its Benefits, Explained
By Carolyn Steber
I Was All For Medicating Mental Health Issues – Just Not For Me
By Anonymous, as told to Dana Smith
Get Even More From Bustle — Sign Up For The Newsletter