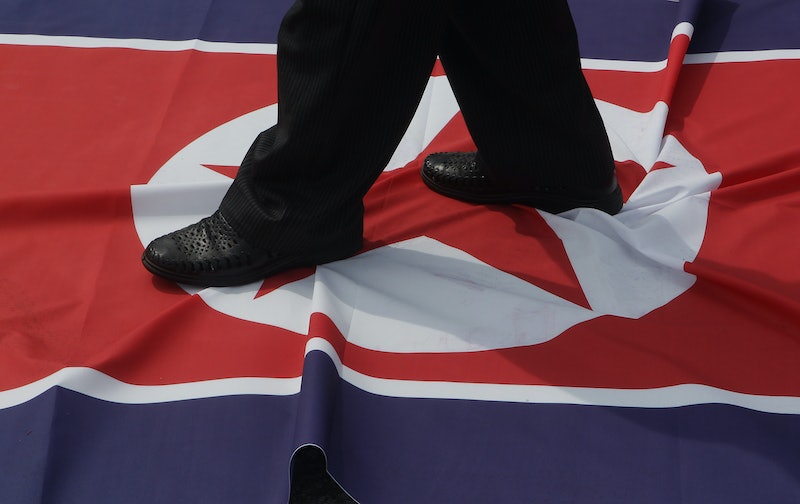 University of Virginia student Otto Warmbier is facing heavy charges abroad, but it seems as though some Americans feel that the consequences for his actions are at least somewhat justified. Warmbier was recently sentenced to 15 years hard labor for allegedly attempting to steal a poster in a North Korea hotel, an act considered to be a "crime against the state" by the notoriously harsh regime. The crime and punishment seem outlandish to many, but some people are still blaming Warmbier for his North Korea detention.

The 21-year-old was traveling with a group of Americans in North Korea, during which he attempted to steal a poster from an employees-only section of the hotel his group was staying at. Though the rest of his group traveled home without incident, Warmbier was detained and stayed behind when he tried to board the plane back home. Different motivations were cited as the reason why the student tried to steal the poster — it was originally purported that Warmbier was taking it as a prize for the fraternity he was pledging to, while it was later said that he took it as a "trophy" for a fellow church member (the church member reportedly promised to buy Warmbier a used car worth $10,000 if he was successful). But whatever the case may be, Warmbier has found himself at the center of an international nightmare.

Some people are not buying the "college prank" narrative, however. Huffington Post writer La Sha argued Warmbier's white, male privilege caused him to believe as though he would get a pass for his actions. She remarks:

That kind of reckless gall is an unfortunate side effect of being socialized first as a white boy, and then as a white man in this country. ... The high of privilege told him that North Korea’s history of making examples out of American citizens who dare challenge their rigid legal system in any way was no match for his alabaster American privilege.

While this type of privilege would usually benefit a man like Warmbier in the United States, Sha argues that those rules do not have a universal bearing and therefore do not apply in a place like North Korea.

USA Today College also collected statements from fellow University of Virginia students, many of whom fell along the same line of thinking. Dominick Candelieri-Marcari, a freshman at the school, backed up this idea:

North Korea’s not exactly a nation known for its hospitality or easy laws. … I understand that people would be up in arms about it, but people act like it wasn’t a foolish thing to do in the first place, which, in my opinion, it kind of was. I mean, if I went to North Korea, I would be walking straight lines, not even looking in the wrong direction.

This seems to fit along the same reasons for why many people have a problem with Warmbier's actions. Though they may not feel that the punishment matched the action, it seems a careless mistake is what got the student in trouble in the first place.