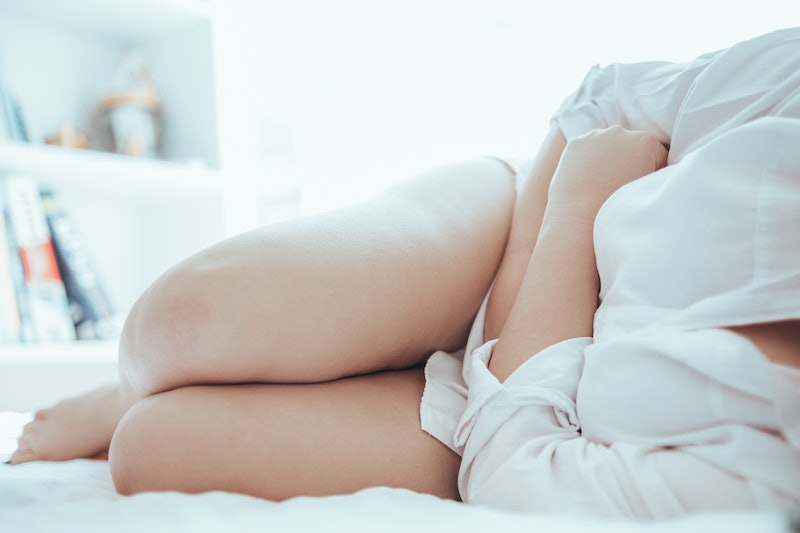 Uterine fibroids sound either disgusting or dangerous, depending on your perspective on "things that grow on your uterus without asking". The good news, however, is that they're generally viewed as less of a problem than they sound like; a whopping 70 to 80 percent of women will have uterine fibroids before the age of 50, though there are differences in expectation about when they may turn up, based on your age and racial background. But there are certain symptoms that can definitely point to a benign growth making a big fuss on a bit of your reproductive system. How rude.

The key thing to realize here, though, is that many woman actually don't know they have uterine fibroids because they're asymptomatic (i.e. none of the following list applies to them at all). Only about a third of all women with fibroids will get an array of these symptoms, and what combination they get is heavily individual. This huge variation is because of the big range of fibroids that can turn up, and their range of locations; the Mayo Clinic lists submucosal (in the inner part of the uterus), subserosal (projecting out of the uterus onto the bladder) and intramural (in the wall of the uterus) fibroids as the most common, but others exist, including a variety of the subserosal variety called pedunculated fibroids, which are fibroids that have developed a "stem".

Fibroids aren't as big a problem as they may sound. They can often be easily diagnosed during a routine pelvic exam, or with an ultrasound or X-ray; more complicated ones may require a laparoscopy, a keyhole surgical procedure to check their location on your abdomen. Fibroids are benign and are usually left alone if they're not causing any symptoms, but treatment for more problematic ones can include pain relief, hormonal medication to shrink them, or even a fascinating non-invasive new surgery called focused ultrasound surgery (FUS) that involves sound waves being directed at your fibroids to destroy them. (How cool is that.)

So while only some women with fibroids will experience symptoms, there are some signs you can watch out for that indicate you might have uterine fibroids — but don't freak out about it if this all sounds like you. Just head to the doctor for an ultrasound.

1. Your Periods Are A Vampire's Delight

This is one of the first signs that a fibroid may be developing somewhere, specifically the inside of the uterus. Both fibroids inside the uterus itself and those lodged in its wall can cause seriously heavy bleeding; any obstruction or thickening may be behind heavier periods, plus fibroids in the wall of the uterus may actually change its shape. It seems that the hormones that have a vital role in the menstrual cycle, specifically estrogen, have a role in the production of fibroids; in pregnant women, the first trimester, with its flood of hormones, tends to cause fibroids to expand, which obviously can cause some serious issues. Medication to reduce period flow can help these kinds of fibroids cause less of an issue.

This particular difficulty is associated with the kinds of fibroids that grow on the outside of the uterus, projecting out into the abdomen. Fibroids can vary vastly in size, from microscopic to weighing several pounds, but if you get a big one on the exterior of your uterus and it happens to be positioned so that it presses on or contacts the bladder, it's a recipe for abnormal peeing behavior.

Because of the significant size of some fibroids, they may actually become physically obvious as a feeling of pressure or roundness in your abdominal cavity. It's actually possible for some women with very large fibroids to look slightly pregnant, because they tend to show up in the lower abdomen where a baby would normally be growin'. Obviously, if there's any kind of fullness or lumpiness that can't be explained by a significant dinner, you need to get to a doctor immediately, whether you think it's fibroids or not.

4. You Get Pain During Sex

There are two possible ways in which fibroids can make sex painful: pressure on the uterus, whether inside or out, or growths in or near the cervix that come into contact with anything inserted — none of which sounds particularly pleasant. The cervical ones can also cause bleeding during sex, according to the Fibroid Treatment Collective, and obviously any unexplained blood from intercourse needs to be investigated, so book into a GP or gynecologist if this is one of your symptoms.

The other side of the menstruation coin when it comes to fibroids is that they can also last longer; we're not sure why, but it's possibly to do with hormonal problems related to fibroid growth. The main issue with prolonged periods, of course, is anaemia; if you find yourself weak, dizzy, and short of breath after a prolonged menstrual period, seek medical attention.

Remember the potential issues that came with the fibroids that pushed on the bladder? This particular issue is the result of fibroids positioned in such a way that they push against the rectum, interfering with the waste disposal of your body; they may prevent proper poos and back you up considerably. This does depend on the fibroids being a very specific size and position, so they shouldn't be the first thought that pops into your mind if you're having a tricky time on the toilet.

7. You Get Lower Back Pain

This is another potential problem stemming from subserosal fibroids, but this one's to do with positioning against the back, specifically the spine. If they're large enough, they may cause enough pressure to create muscular or spinal pain, and will have to be diagnosed via MRI along with other scans to see whether they're the cause of the issue. This is one of those cases where treatment, whether via medication to shrink them (like gonadotropin releasing hormone analogues or ulipristal acetate) or a surgical procedure, might be seen as a pretty good idea.

Remember, a lot of these symptoms could be signs of other things, so if this sounds like you, head to the doctor to get an ultrasound and get things sorted out for sure.