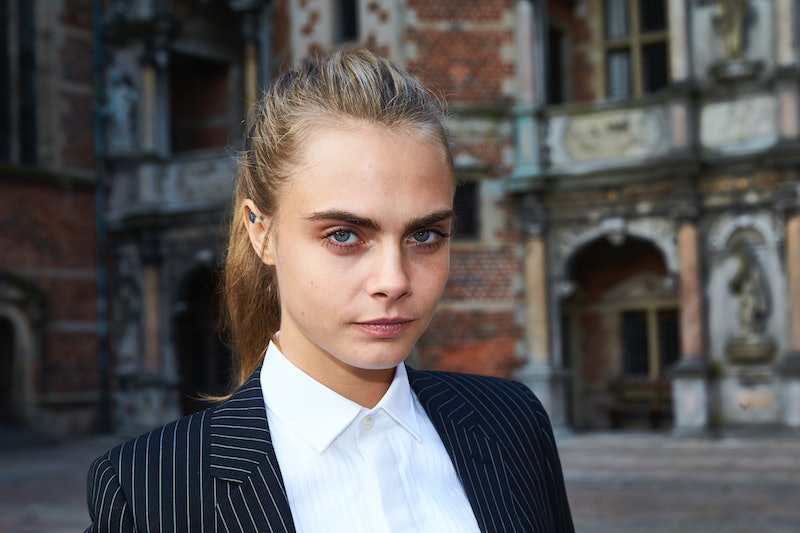 Every time a person in the public eye, like Cara Delevingne, opens up about their battles with depression and other mental illness, I feel an overwhelming sense of relief. Not because I want anyone to struggle with depression, of course — in fact, it seriously saddens me — but when famous figures like actors, models, and musicians open up about their struggles, it helps to lessen the stigma of mental illness that much more for the rest of us non-famous people, and that is so important. Delevingne, one of the most famous models out there right now, took to Twitter to clear up some rumors that have swirled about her hiatus from modeling, and her words offer an important reminder for anyone struggling with depression.

For background, in August of 2015, Delevingne told The Times , "I am not doing fashion work any more, after having, like, psoriasis and all that stuff. Modelling just made me feel a bit hollow after a while. It didn’t make me grow at all as a human being. And I kind of forgot how young I was ... I felt so old." It's honestly pretty easy to forget that Delevingne is only 23 because her famous face has been all over magazine and TV ads for so many years, but it's true — she is still so young.

Delevingne had said she would instead focus her attention on acting, and has since scored a slew of acting credits to her name, but she wanted to clear the air about the notion that she'd quit modeling. In a series of tweets, she wrote:

It seems that Delevingne is in a better head space now, having just been announced as the new face of Saint Laurent, while adding to her acting career, but her self-professed Twitter "rant" offers an important reminder to anyone struggling with depression or mental illness: self-care is crucial to your mental well-being.

Of course, most of us can't afford to take time from work or to shift gears to a different career path on a whim, like Delevingne can, and it's not uncommon for people struggling with depression to use work as an escape. It makes sense to shift focus to work when it feels like nothing else in life is going as planned, but it's so important to remember to take time to relax. Delevingne mentioned that she ended up "completely exhausting" herself, and burning out during an already emotionally fragile time is not good for anyone.

As for things that can help... well, they're different for everyone, but Delevingne has said that opening up to friends and treatment with a therapist and medication has helped her. She also credits yoga and writing in a journal with helping her cope.

It's wonderful to see someone like Delevingne being honest and candid about the fact that mental illness isn't something to be ashamed of, and her message can only stand to help other young people grappling with similar kinds of things.

More like this
Olivia Munn Got Real About How Her Body Hasn’t “Snapped Back” Post-Pregnancy
By Stephanie Topacio Long
Lily Allen Was “Quite Emosh” After Performing Sober At Glastonbury Festival
By Stephanie Topacio Long
Here’s How Lizzo Is Supporting Abortion Rights After The Roe v. Wade Reversal
By Brad Witter
Alyson Stoner Says She Went To Rehab After Auditioning For 'The Hunger Games'
By Jake Viswanath
Get Even More From Bustle — Sign Up For The Newsletter