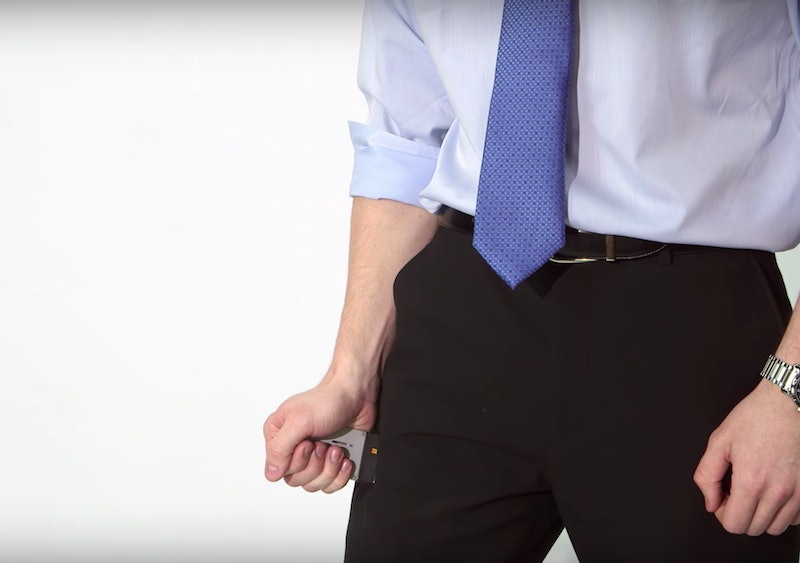 If you or one of your loved ones suffers from a severe allergy, you know how crucial it is to have quick, easy access to an epinephrine autoinjector — also known as an “EpiPen.” At the University of Minnesota, two students have developed a wallet-sized epi-pen, in hopes that its convenient size will encourage more people with severe allergies to keep the medication with them at all times. The device, called the “AdrenaCard,” may be small, but it could have a life-saving impact for people prone to dangerous allergic reactions.

People with certain types of severe allergies — particularly to food, insect bites and stings, medication, and latex — are at risk for anaphylaxis, a sudden, potentially life-threatening allergic reaction. During anaphylaxis, people’s airways can swell to the point that they have trouble breathing; they may also experience vomiting, break out in a rash, and have a drop in blood pressure. The usual treatment is the rapid use on an EpiPen, which comes pre-loaded with epinephrine; you jab it into the patient’s thigh, and it injects the medication into the body through a short needle. The epinephrine causes blood vessels to constrict, which reduces swelling and allows the person in crisis to breathe. The EpiPen should then be followed by a trip to the emergency room.

The problem with EpiPens, according to AdrenaCard founders Tyler Ebert and Christopher Kuehn, is that a lot of people don’t have them when they need them. The Allergy and Asthma Foundation of America estimates that one in 50 Americans experience anaphylaxis, and yet more than half of those at risk have never even received a prescription for an epinephrine autoinjector. In an interview with the Twin Cities Pioneer Press, Ebert claimed, “Of the 16 million who are at risk for anaphylaxis, less than a quarter currently own an auto-injector and less than half of those carry one at all time.” Ebert said that people often fail to keep their autoinjectors with them at all times because of “the poor usability of contemporary devices.” Current products on the market look sort of like fat markers; they’re effective when used, but they’re not particularly convenient to keep in a pocket. Some people who do have prescriptions for them don’t want the hassle of keeping track of them at all times, which can put allergy sufferers in dangerous situations.

The AdrenaCard works the same way as an EpiPen, by injecting epinephrine into the leg, but the company founders hope that the device’s shape and size will make it more convenient to carry around. According to Gizmodo, the AdrenaCard is just under four inches long and two inches wide, with a width equivalent to that of a few credit cards stacked on top of each other. It would fit easily into a back pocket or wallet.

To use, you remove the cover, pull away a tab, and jab the device into the thigh:

The AdrenaCard is currently undergoing testing by the FDA. If approved, it should be available by 2018.