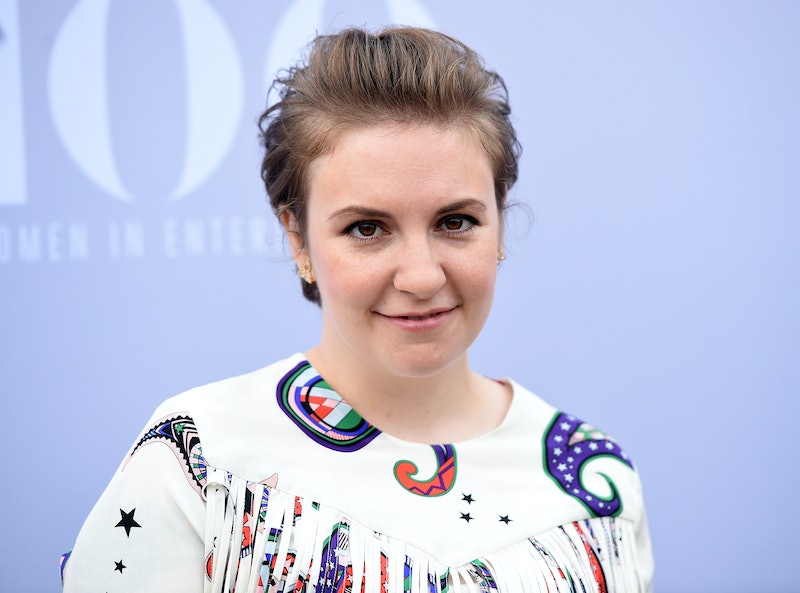 There are few things as exciting to me as when two of my favorite female celebrities turn out to be friends in real life (see: Taylor Swift and any member of her squad) so I'm particularly loving the sister love between Khloé Kardashian and Lena Dunham as of late. It appears that Dunham and Kardashian haven't met in person yet, but they totally need to. Theirs would make for a friendship of the feminist ages. In fact, I'm not sure the world could handle the fierceness.

To recap: Dunham shared an Instagram post of a quote by Kardashian that said, "Just knowing you're a badass b*tch is what life is about," which is the truest thing ever shared to the 'gram, if we're being honest. Kardashian followed up with a tweet that said she'd been in a meeting and a bunch of men "referenced Lenny Letter," Dunham's feminist arts newsletter. Dunham issued praise back to Kardashian on Twitter, writing, "Hey @khloekardashian, the women of @lennyletter worship you. Keep telling your truth. So much love." Then Kardashian posted an ode to Dunham on her blog with four reasons why Dunham is her soul sister. Guys, I'm obsessed with this. These two need to meet and become friends IRL. Here's why:

They Both Value Their Friendships With Other Women

As both ladies' careers have blossomed in a crazy way in recent years, there are surely plenty of hangers-on with less-than-genuine intentions trying to get into their inner circles. But both are famous for keeping the same tight-knit crew around: Kardashian is super close with her sisters (and the rest of her family, obvs!) and has always maintained the same friends, such as Malika and Khadijah Haqq. For her part, Dunham has always been super tight with her Girls cast and crew and constantly shows love and support to the women in her life.

They're Spreading The Same Message

Both women have been open about the adversity they've overcome, from Dunham opening up about her struggles with endometriosis and mental illness, and Kardashian... well, her life has been an open book since she first graced our TV screens in 2007, and her show has touched on her body image issues and experience trying to conceive. They're great role models for all women.

They're All About Being Confident In Your Body

Kardashian and Dunham are no strangers to criticism in the press about their looks, which is ridiculously unfair. The difference is that both women have used it as fuel to rise above the haters and remind women that society's standards are bullsh*t, and that it can be hard to be confident in your own skin, but that our differences are what make us beautiful.

They Are Both Style Icons

OK, so their style couldn't be more different... but that's what makes them both so fabulous! Kardashian has proven herself to be a style maven in an incredibly fashionable family, which is no easy feat. Dunham has always embraced her own style, never choosing to adhere to beauty or fashion industry standards. They both stun in their own ways, and that's what is so cool about them.

I can't even imagine hanging out with the two of them together because I feel like my stomach would ache from laughing so hard. They both have great senses of humor, and I think they'd have boatloads of fun if they hung out IRL.

Thanks, ladies, for giving me a new friendship to obsess over. I live for you both!

More like this
Khloé Kardashian Is Reportedly Dating A Private Equity Investor She Met Through Kim
By Jordyn Tilchen
Jennifer Coolidge Needs 'Legally Blonde 3' To Happen So She Stops Getting Hot Dog Jokes
By Jake Viswanath
Beyoncé & Madonna’s “Break My Soul” Remix Honors A Group Of Black Icons
By Stephanie Topacio Long
Who Is Camila Cabello Dating? She's Getting Cozy With Lox Club CEO Austin Kevitch
By Radhika Menon
Get Even More From Bustle — Sign Up For The Newsletter