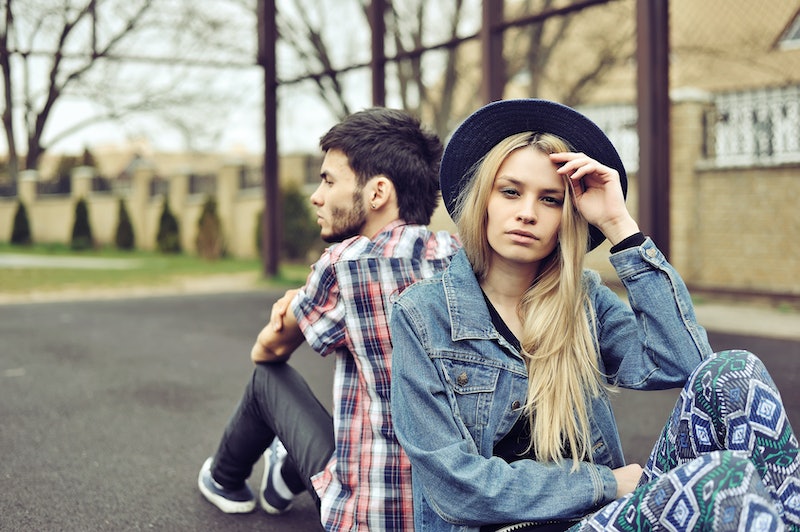 When you give your all into a relationship or to someone who isn’t giving anything back in return, it sucks, but it's also a hard pattern to break — but you can certainly do it. According to Psychology Today, women who fall for unavailable people have some “profound insecurities and self-esteem issues.” It sounds harsh, but the thinking is that women continuously pursue emotionally unavailable partners with one unconscious motive: When the guy or girl finally comes around and commits, she’ll be somehow validated.

But that doesn’t necessarily mean she’s desperate. While it may indicate self-esteem issues, it also showcases perseverance. As Psychology Today further points out, “though this approach isn’t ideal, her behavior reflects the fact that she is patient, hard working, and committed to something she cares about.” All of which, are of course, really great qualities in not only a partner but a person.

A lot of us have been there: You meet someone new. They’re attractive, they’re fun, and you get along really well. Overall, there’s a good vibe between you two. Everything seems be pretty close to perfect — at the beginning anyway. A few months later, you start to realize that you may be really falling for this person. But for some reason, the closer you try to establish something more tangible, they pull back. So, you push and you push and you put all your effort into trying to convince this person that you two could be really great together, but instead of getting the answer you want, you’re pretty much left with insecurities, unanswered questions, and of course, heartache.

I talked to several experts for their advice on how to stop dating emotionally unavailable people. Here’s what they had to say:

1. Notice The Signs Early On

If you’ve ever been in a relationship with someone who’s emotionally unavailable, then you know what the dark side looks like, Esther Boykin, licensed psychotherapist and CEO of Group Therapy Associates tells Bustle. At first they're mysterious, deep, brooding, or even funny and the life of the party. But soon enough, you come to find out they’re detached and closed off.

According to Boykin, “The trick is to seek partners who are capable of a range of emotions from the outset. They can get frustrated but still talk to you about it or become quiet without shutting you out. If you notice the signs early you can avoid the heartache and emotional complications down the road.”

2. Get Honest With Yourself About Why You Keep Going After The Same Type

As I said before, it can become a bad habit to keep dating these heartbreakers over and over again. As Boykin says, “If you find yourself in a string of relationship with one emotionally unavailable person after another it's time to do some self-reflection. We all pick a bad apple every now and then from the dating pool. But when a pattern emerges, it may be time to schedule a little one-on-one time with a therapist.”

According to Boykin, the likelihood is that there's something appealing to you about their lack of emotional depth. Maybe it feels familiar from an old childhood relationship or maybe you have some difficult emotions like a past trauma or mood disorder that make the lack of intense emotions attractive at first.

Whatever the reasons, if you notice the pattern then you are already half way towards resolving the issue that might be keeping you stuck with an emotionally cut-off partner.

“Studies show that many individuals who report frequently getting hurt in relationships report that they experience a sense of false-hope,” Denise Limongello, licensed Psychotherapist and Relationship Expert based in Manhattan tells Bustle.

“Tethering" is a new phenomenon that exists on the Internet which is meant to explain people who text frequently but never initiate dates or plans with a new person. Constant texting can lead to false hope that a relationship might ensue. If someone is texting you frequently but never setting up a plan, this can be an indicator that this person is emotionally unavailable and might be worth steering clear of.

4. Insist On Identifying The Relationship After Some Time

When you’re dating someone who’s emotionally unavailable, it can feel like you’re being strung along for a long time. According to Limongello, “If a person wants to date you but refuses to identify your relationship with a label, this can be an indicator that he or she is emotionally unavailable. Many people are careful not to use labels at the beginning of a relationship. But if your ‘partner’ refuses to call you by that label for a significant period of time, this can be a clue that he or she does not intend to make things official with you anytime soon, or ever.”

5. Recognize That You’re Not Meant To Be Their Savior

It may feel good to help someone, but that’s not your job. As New York-based relationship and etiquette expert and author, April Masini tells Bustle, “Ask yourself what you’re getting out of these relationships. Some people date the emotionally unavailable to rescue them. If you’re the type of person who wants to rescue those less fortunate, volunteer at a pet shelter. You’ll be doing good for those who appreciate your work!”

Masini also point out, if you’re insecure and uncomfortable with dating, dating someone who’s emotionally unavailable may make you feel superior and less insecure.

“Sometimes you need someone who is ‘damaged’ to make you feel less so,” Masini says. “Being able to articulate this reason for dating the emotionally unavailable may make you realize this isn’t really in your best interest.”

6. Develop Your Sense Of Self

If dating emotionally unavailable people stems from self-esteem issues, then work on developing a sense of confidence and worthiness. As psychotherapist and relationship coach, Rachel Dack tells Bustle, “The way you feel about yourself directly affects your relationships with others and your dating life. When you feel confident and able to attract a great partner, you are no longer willing to accept anything less.”

Dack suggests mastering a skill, participating in hobbies and interests, utilizing healthy self-care patterns such as exercising and getting more sleep.

7. Ask Yourself This, “Are You Really Ready For A Relationship?”

“One of the key points I discuss with my clients is we often attract people who are in a similar emotional place as we are. So it's important to honestly assess how emotionally available you are first,” Baumgartner says.

Do you have past hurts that cause you to hesitate to open your heart again? Are you questioning your intuition because you've chosen badly in the past? Furthermore, it's equally important to asses the other areas of your life.

It is hard to break out of that pattern. Regardless of whether you want to help someone or validate your own self-worth, is it really worth it to feel like crap over someone who most likely doesn’t even care? Of course not! I know it can be annoying to hear that it may take some patience, but at the end of the day, when you finally break the habit, you’ll find yourself in the relationship that you deserve.