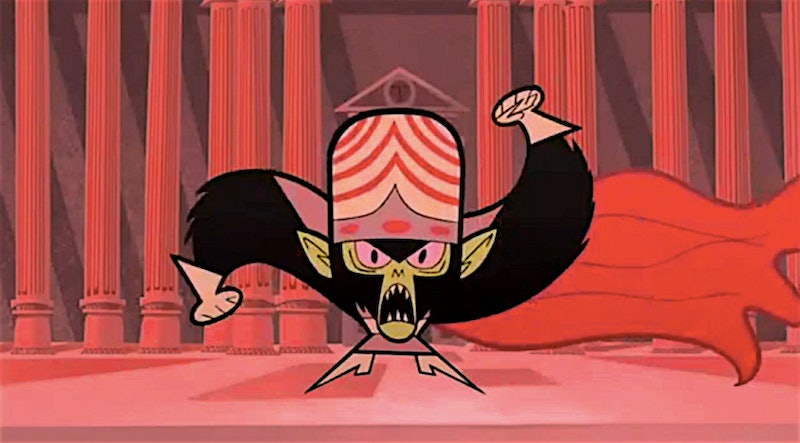 The Powerpuff Girls is returning to Cartoon Network after nearly a decade off the air, save for an occasional special here and there. The Girls may be back in town, but with the titular Powerpuff Girls come villains from which to save the world, and fans are absolutely going to expect classic baddies like Mojo Jojo to visit the Powerpuff Girls reboot. While there are a plethora of recurring villains for the Girls to fight, he's the one villain that stands above the rest, who is as synonymous with The Powerpuff Girls as Townsville and Chemical X. He's the monkey who has dedicated himself to being The Powerpuff Girls' sworn enemy and without him, Townsville won't really be Townsville. Luckily, fans can rest easy going into the new 40-episode run of the series.

The iconic ape/villain will return to the scene in the new series. Mojo Jojo has been featured in some of the promotional materials for the show, showcasing his slight redesign to match the new art style of the show. Better news is that, while many of the characters are getting new voice actors, Roger L. Jackson will be returning to the show to perform his role as Mojo Jojo, who he has played since 1998. While it's great that Mojo Jojo will be returning to the show as the Powerpuff Girls' main antagonist, what other villains can fans expect to return to Townsville? Here's a primer on the set of villains you should reacquaint yourself with.

HIM — short for H.is I.nfernal M.ajesty — is a seemingly immortal red person with an androgynous qualities who has mechanical claw hands and is basically Satan. The Powerpuff Girls regularly fight Satan, and win. (When's the last time you saw Captain America literally fight the devil himself?) HIM was not just the most powerful villain in the world of the Powerpuff Girls, but possibly one of the most powerful villains ever written. Luckily, he's not without his weaknesses, as HIM has a penchant for rubber duckies and yoga.

Fuzzy Lumpkins made his introduction in the very first Powerpuff Girls short, and has remained a mainstay for the series ever since. Lumpkins is a large redneck... something. He's a monster, but a giant fuzzball monster who still feels the need to wear overalls? Why is he pink? What purpose do those antennae serve? Lumpkins raises a lot of questions, but one thing that's clear is that he is not a fan of the Powerpuff Girls.

Remember the mean rich girl from your high school who always flaunted all the things she had access to and made snide remarks about other students? Now imagine that that girl was five years old and decided to self-fund her superhero efforts á la Batman. That's Princess Morbucks, whose sole mission is to destroy The Powerpuff Girls because she is jealous that she cannot be one. Luckily, the Powerpuff Girls know better than to spend their energy trying to tear down other women, and tend to let her off fairly easy once she's learned her lesson.

The Gangreen Gang is a group of five teenagers with the coolest names — Ace, Snake, Big Billy, Grubber, and Little Arturo — that create havoc and attempt to torment the girls, Despite their grotesque appearance, it seems that the Gangreen Gang are just a bunch of kids who grew up on the wrong side of the tracks.

Yeah, The Suicide Squad is pretty cool and all, but they're nothing compared to this team of villains. The Holy Grail of Powerpuff Girl villain team-ups, the Beat-Alls consists of Mojo Jojo, HIM, Fuzzy Lumpkins, and Princess Morbucks. It's basically a group powerful enough to do anything they wanted. At least, they were until Mojo Jojo started hanging around Moko Jono. While things didn't work out in the original series, getting this super-villain team together would be huge for fans.

The Powerpuff Girls reboot appears to feature villains new and old, giving fans the enemies they grew up with and giving new fans villains to grow attached to. The villains in Powerpuff Girls can actually be pretty scary — again, one of their main villains is literally Satan — but the fact that the Powerpuff Girls never back down and are always able to save the day is a testament to their skills as superheroes... and the reason why we love them so much.