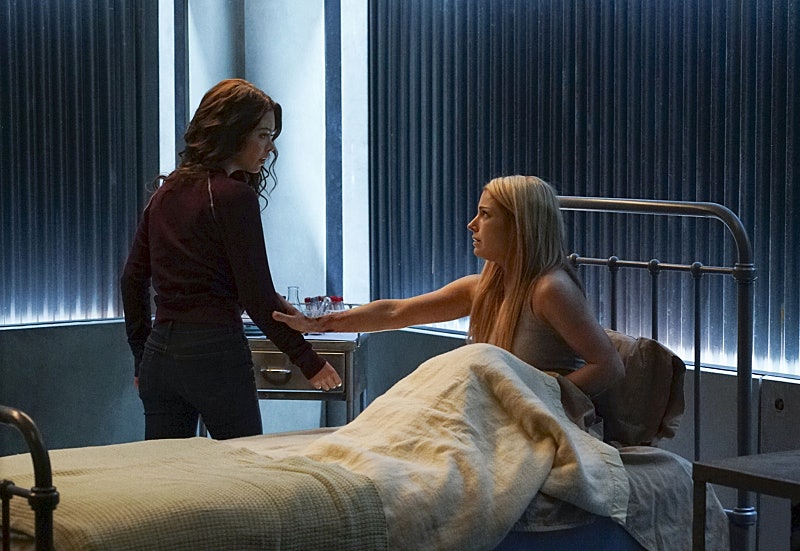 After weeks and weeks of being on hiatus, The Vampire Diaries wasted no time in promptly stomping all over our hearts upon its return. Friday night’s episode saw not one, but two characters bite the dust (please appreciate the vampire-y pun) by the end of the hour. And I'm not talking about the kind of dead-like state that half the people on this show are currently in — you know, considering the fact that many of them are vampires — I'm talking about permanently dead. As in never coming back again. (Though supernatural loopholes are kind of this show's bread and butter.) So who was killed off, you may ask? None other than two of our favorite remaining Heretics. That's right, folks — Nora and Mary Louise died on The Vampire Diaries and their goodbyes to each other were downright heartbreaking.

After being held captive by The Armory for three years, viewers learned that Mary Lou was being experimented on by being given various injections of Rayna's blood — something that is apparently fatal to all witches. (Worried about you, Bonnie Bennett!) And the worst part of it is that The Armory hasn't even been able to develop an antidote yet, which means Mary Lou's been living on borrowed time for quite a while now. (Seriously, this organization is just the worst.) So when Nora accidentally got marked by Rayna's sword, they both decided to absorb the stone's power in order to destroy it... even if it meant killing themselves in the process.

At first, Mary Lou wanted to do it on her own, considering the fact that she was already dying. But Nora didn't want to go on living without the love of her life and refused to take no for an answer. Shortly there afterwards, the car exploded and the stone along with it.

Up until now I'll admit that I've been somewhat indifferent to the Heretic characters in general, but the bond that these two have continually demonstrated eventually managed to win me over and took their final scenes together to a whole different level of emotion. I am genuinely sad to see them go. But if they had to leave the series, I'm glad that it was in an act of heroism and allowed for them to say a proper goodbye.